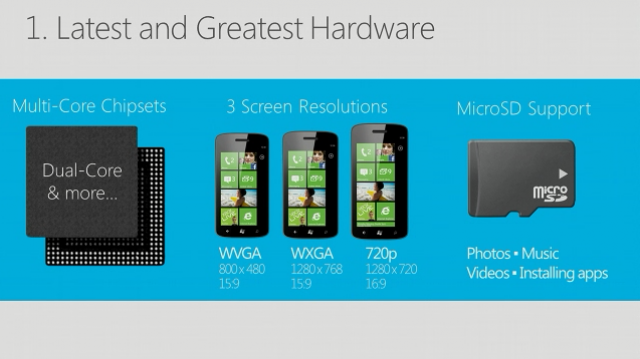 Yesterday Microsoft showed off some upcoming Windows Phone 8 features and HTC was one of the manufacturers to hop on board to announce their commitment to the platform. In a press release Peter Chou, CEO of HTC, said that “HTC is committed to Windows Phone more than ever and we are excited to be bringing new Windows Phone 8-enabled smartphones to customers later this year.”

Reading that above statement shows they plan on releasing several smartphones and today their WP8 roadmap has leaked online, along with specs of 3 devices. According to a post on The Verge, HTC will launch the Zenith, Accord and Rio. Apparently the Zenith is the flagship device, while the Accord is the mid-level and Rio is the entry-level.

As for specs, the “Rio” will have a 4-inch display, a 5-megapixel camera that shoots 720p HD videos, 512MB memory, a Qualcomm Snapdragon processor. The “Accord” is expected to have a slight bump up in specs with a 4.3-inch 720p Super LCD 2 display, 8MP that records 1080p HD videos, 42Mbps HSPA+, NFC support, 1GB of RAM and a dual-core processor. The Zenith will sport a 4.7-inch 720p Super LCD 2 display, 8-megapixel sensor, 42Mbps HSPA+, but will feature a quad-core Qualcomm Snapdragon processor.

Microsoft stated that the new Windows Phone 8 devices will be available “this fall.” However, these HTC devices are rumoured to ship within the next few months. The Rio and Accord might possibly be available in October, while the heavy hitter Zenith coming for the busy Q4 period. No word on prices.

Rogers to launch the LG C195