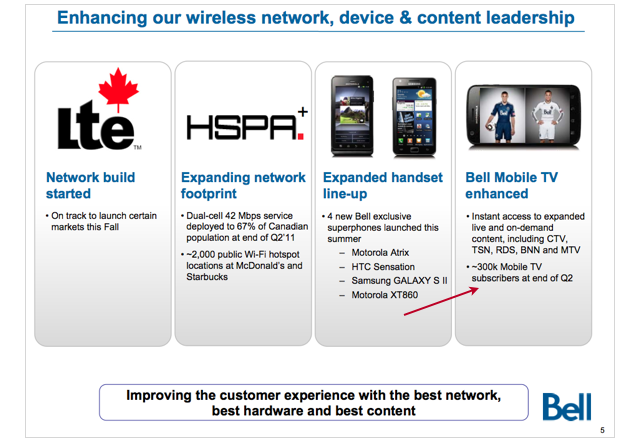 Bell announced their Q2 2011 results this morning and the wireless subscriber base reached 7,283,847. Looking over the presentation an interesting stat has emerged. Over the years Bell has been going hard on promoting their Mobile TV offering, it really started with the 2008 Beijing Olympics but bolted recently with the adoption of smartphones and since they gobbled up CTV.  In 2008 Bell only had 1,000 subscribers for Mobile TV but according to this slide it shows they have now reached the 300,000 subscriber mark. That’s significant growth over the years. Bell charges $5 for 10 hours of viewing on your handset and $10 for 10 hours of viewing on your tablet.

So 300k out of their 7+ million wireless customers represents 4.1% are subscribing to Mobile TV. Most likely these subscribers are Postpaid of which Bell has 5,716,326. So possibly the more accurate number of is 5.3%.