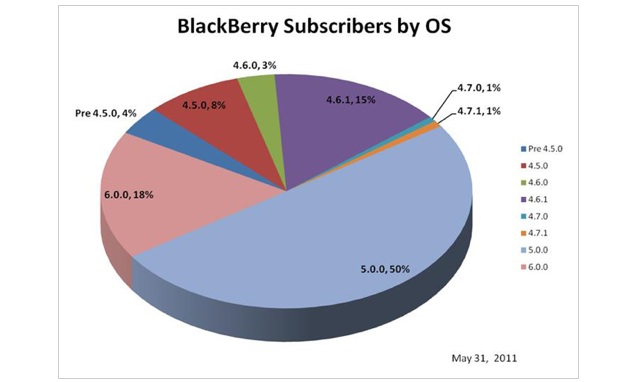 RIM has released some stats of their BlackBerry devices. While the world patiently waits for OS 7 to be released their BlackBerry 6 OS continues to increase, now making up 18% of in-market devices (up 8% in March). Still making up the lions share by 50% is OS 5, which is very telling. In addition, although there’s no recent stats of the number of apps the BlackBerry World has (last count was 20,000 apps and 3 million downloads per day), BlackBerry 6 makes up 31% of free app downloads and 54% of all paid app downloads. However, OS 5 is still incredibly popular with 40% of paid app downloads and a high 57% of all the free app downloads. These stats are generally for app developers to encourage them to upgrade their app to the latest OS and better target BB users. RIM also stated that BlackBerry 7 simulators have been released in the Developer Zone and that devs shouldn’t “be late to the party”.