PlayStation phone to be announced December 9th… for $500 no-contract? 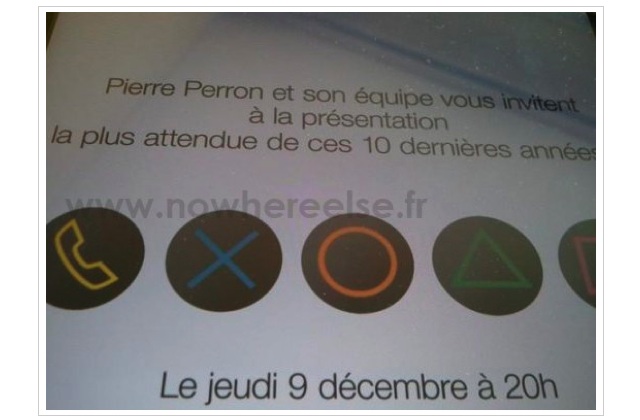 An invitation from Sony Ericsson to “the most anticipated presentation of the past 10 years” is scheduled for December 9th – pointing towards the announcement of the PlayStation phone. There has been images surface in the past few weeks about this Android device and no pun intended it’ll be a game changer for gamers.  Rumoured specs have it with Android OS 2.2 but could launch with 2.3 Gingerbread, has a screen size between 3.7 to 4.1 inches, slider that reveals the dedicated gaming controls, a 1GHz Qualcomm MSM8655 processor, 512MB of RAM, 1GB of ROM, a custom Sony Marketplace and comes with an 8GB microSD card.

The invitation was posted by French tech site NowhereElse, but MobileCrunch got tipped by the following info as well: That the invitation is real and the PlayStation phone has a “mind-blowing” display that is on-par with the iPhone 4′s retina display. In addition, they are aiming for a February release around the $500 mark that includes 5 free games. A bit of a downer is that you won’t be able to downloaded PlayStation Portable games as they will be creating a selection of games specifically designed for the phone – somewhere priced below the $10 mark per game.