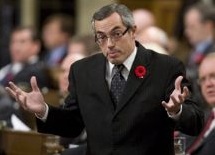 There was much talk since Governor General Michaëlle Jean stated “Our government will open Canada’s doors further to venture capital and to foreign investment in key sectors, including the satellite and telecommunications industries, giving Canadian firms access to the funds and expertise they need.”

No insight was given yet on wireless foreign ownership but yesterday Industry Minister Tony Clement said “I am conscious of the fact that by mentioning it in the Speech from the Throne it’s become a matter of commentary and that affects marketplaces and so on. So I don’t want this to drag on forever. I do want to allow the industry a bit of time to breathe on it. But at the same time we will be coming to a conclusion and acting on it.”

The whole goal is to provide more competition and hopefully give us customers lower wireless rates. If and when foreign investors come into Canada how do you think the wireless market will look like? Big players from other countries like Verizon, T-Mobile? Will Bell and TELUS then merge to for a big Canadian player?

More here at the Globe

Government to clarify telecom foreign investment “in the coming weeks”