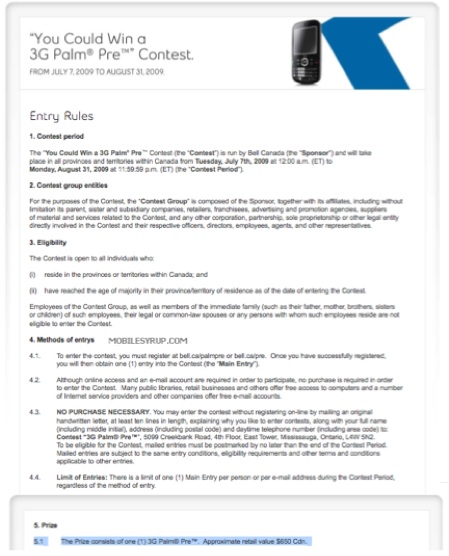 Bell announced they will exclusively launch the Palm Pre way back on May 6th. Ever since that spectacular day they’ve ever so gently teased us with the now frustrating “Coming Soon” with only the vague insight that it’ll be available during the second half of this year.

They’ve continued the teasing today with putting a contest together that could see you win your very own Bell Palm Pre. You can enter your name and all your personal info. The contest goes until August 31st.

I checked out the rules and regulations and found out the approximate retail value of the upcoming Bell Palm Pre is $650 Canadian. Bell usually rounds things down by a nickel so if you’re planning to buy the Palm Pre outright you can most likely expect to pay $649.95.

In addition, probably the most odd part of the entire contest is the fact that this is such a landmark device, a wireless carriers dream device and what happens? We were incredibly surprised to find in the rules and regulations that the once popular Palm Treo Pro was inserted instead of the glorified Palm Pre. Wow… probation time for somebody.

Everyday we get closer and closer to the new Palm launching. More here at Bell