Public Mobile: No Bill & “You will see us in Strip Malls” 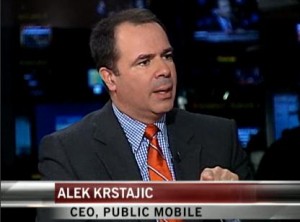 It’s been a very long time since Public Mobile made a public appearance, actually since they officially launched on February 5th. Yesterday, Public Mobile CEO Alek Krstajic talked with Howard Green of the Business News Network (BNN) about what we should expect in the coming months from them.

Public Mobile spent $53 million in last years Spectrum Auction to become of the new wireless carriers in Canada. With a tagline of “Everybody Talk” they are looking to launch in Q3 with an offering of a $40 monthly “unlimited flat-rate talk and text package, with no term commitment, no credit checks, no fine print and no surprises”.

In the interview, when asked if Public Mobile is going to be the carrier that people go to when looking to trade down, Krstajic stated that Public Mobile “could be that, but I think first and foremost we are going to be the cellphone company for people who really feel that today there isn’t really a choice for them. A lot of the 30% plus Canadians that don’t have a cellphone are value conscious and they cannot afford the unpredictability of bills that we see today in cellphones and the cellphone world, not knowing if it’s going to be 50, 100 or $150… In fact, we’ll have no bill! Why would need a bill if it’s $40 unlimited talk and text? There is no need for a bill, it’s part of how we drive the value piece of this.”

Also, Howard Green asked Krstajic “Are Canadian cheap when it comes to cellphones?”, in response he said, “I don’t think Canadians are cheap, I think the penetration is low because there hasn’t been an alternative like Public Mobile. In the United States you have companies like Metro, Leap, Revol… they become the supplier of cellphones to the working class, the value conscious segment.”

“What about your network, how reliable will it be because people pay for reliability” Green asked. “We are going to actually have a network that is as reliable as others, it won’t be able to do all of the data and video the incumbent netoworks can do, but it will be every bit as reliable. We have the benefit of being the last guys in so we can deploy the newest technology at less than half the cost.” said Krstajic.

When Public Mobile actually launches he said “There will be a lot of places to get a phone from us, we will be where our value conscious segment lives, works and plays. I don’t think you’ll see us in the traditional high-end malls because our segment doesn’t actually shop there. I think you’ll see us do some very interesting things on distribution, it’s a bit of the secret sauce… you will see us in strip malls, yes”.

Sure sounds like Public Mobile is ready to rock, the latest technology is questionable as they’ve bought the very limited and unwanted “G Band” spectrum, plus there will be a fair amount of competition with other Talk and Text alternatives such as Koodo, Virgin, Solo, Fido and eventually Globalive.