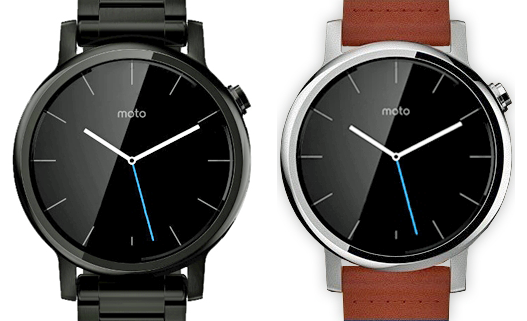 The new Moto 360 is expected to be announced in the coming days and has already leaked on several occasions, even from Lenovo’s CEO. What is known of this second generation smartwatch is that it will come in two sizes — 360S and the 360L — and follow its predecessor with its signature round design.

Reputable device leaker Even Blass has confirmed colours of the Moto 360 2nd Gen by showing renders in a light finish and dark finish, and that it’ll have leather and metal band options. There is no further indication of other customization options with the watch straps.

Previous rumours hinted the 360S (which is the smaller of the two) and the 360L will have display resolutions of 360 x 360, and that the 360L will see the battery significantly increase to 375mAh, up from last year’s 320mAh in the original Moto 360.

Update: It seems Motorola is joining other manufacturers by catering to another audience. New leaked images of what is said to be the Moto 360 Sport has surfaced and shows the smartwatch band in various colour options. Unfortunately, the “flat tire” on the display is still very visible.