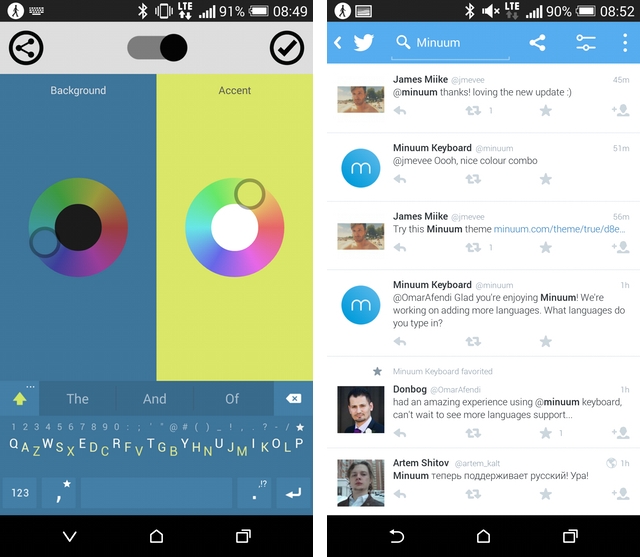 There’s a lot to say about keyboards today. In addition to SwiftKey going free for all users, popular Toronto-based input method, Minuum, also released a big update for Android devices.

The one-dimensional keyboard has been gaining popularity not only for its intuitive autocorrect algorithms but its quickly-growing retinue of languages supported, often dynamically, in various apps.

Today’s update brings custom themes to those who have paid for the app ($3.99 on the Play Store), using an intuitive dual colour wheel to select background and accent colours. Users can save and share these combinations across social media, so adding a new one is a two tap affair.

Minuum also added a new toggle for its full keyboard mode, making it far easier to switch between it and the “mini” version. Instead of holding two fingers down on the keyboard, users can now swipe up or down on the autocorrect suggestion panel, a huge time save especially when you only have one hand free.

And multi-language users will be happy to know that keyboard layouts are now saved based on selected language, so if you tend to use the mini layout for English and the full-sized for French, those choices will now remain intact. Speaking of languages, Russian language typists now get a chance to use Minuum.

If you’ll recall, Minuum recently added a 30-day trial period for all users, so if you’re unsure whether the keyboard fits in with your typing style, you can now give it a try.