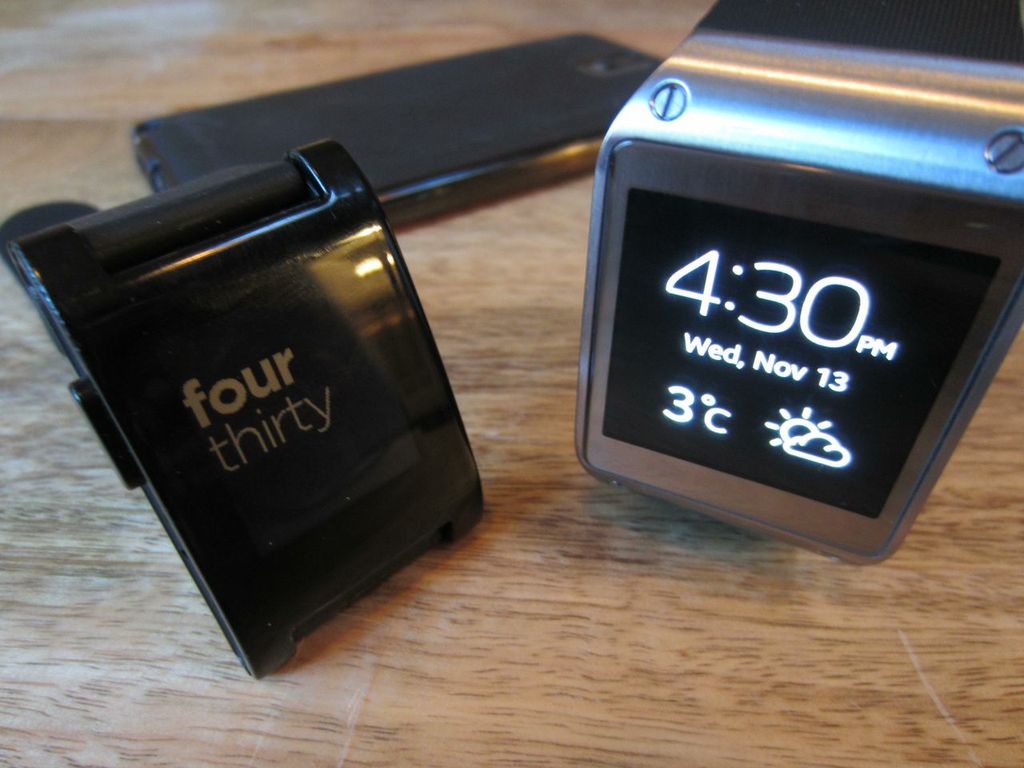 The war for your wrist is on. The smartwatch market is heating up with a number of manufacturers all vying for that empty spot on your arm. To help you wade through these new (and murky) waters, we go hands-on with two heavy weights in this space: Kickstarter darling Pebble, and Samsung’s first wearable the Galaxy Gear.

The Galaxy Gear is a stark departure for Samsung from the plastic, cheap-feeling devices they have been known for in the smartphone and tablet market. The device feels weighty and expensive in your hands. The stainless steel face and the glossy sapphire glass display go a long way towards justifying the hefty price of the device.

Although the plastic Pebble doesn’t feel as expensive, its lighter and thinner design makes it less noticeable on your wrist. It is also less precious than the Gear, which makes it feel like it can better handle the wear and tear of life. Its sleeker profile also avoids getting caught on material, like your shirt cuff, less often than the Gear. 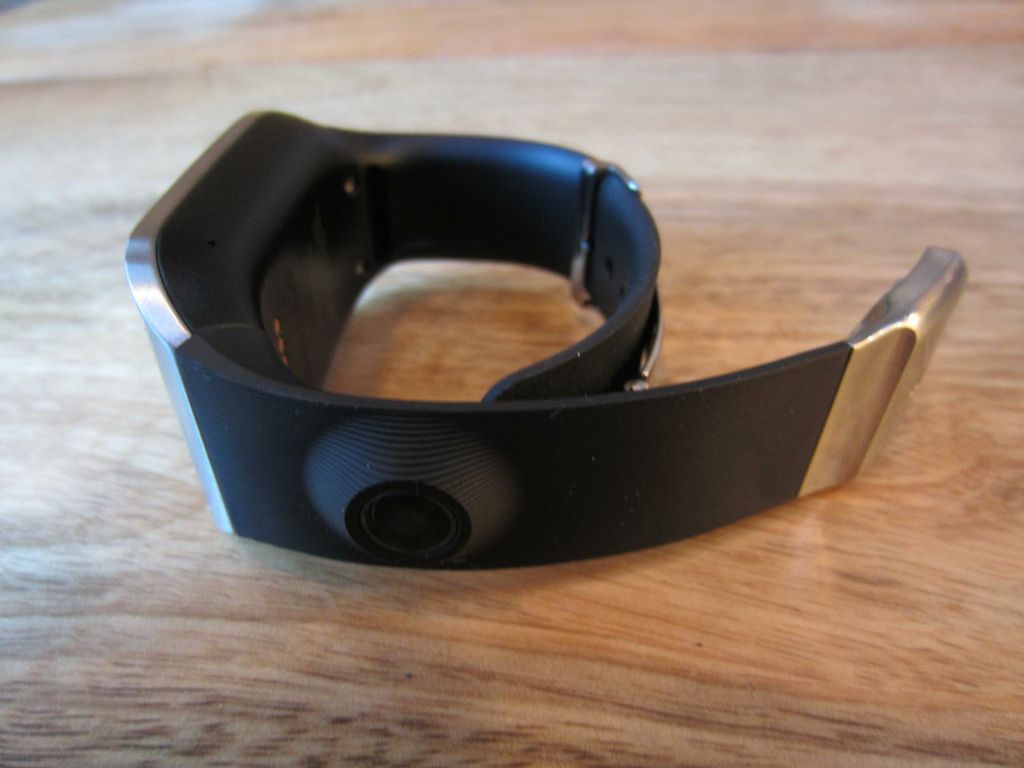 The Gear is the heavier of the two weighing in at 74g. The Pebble is 36% lighter than the Galaxy Gear, weighing only 47g. The Gear’s excess weight is due not only to its material choices but its camera, speaker and microphone, all of which are not available on the Pebble.

I find it funny when people complain about the weight of either smartwatch. The average men’s Rolex can weigh upwards of 200g;  the ceramic white Michael Kors, a female favourite, weighs a whopping 375g. Of course, both of these luxury watches are much more fashionable than the Gear and Pebble. 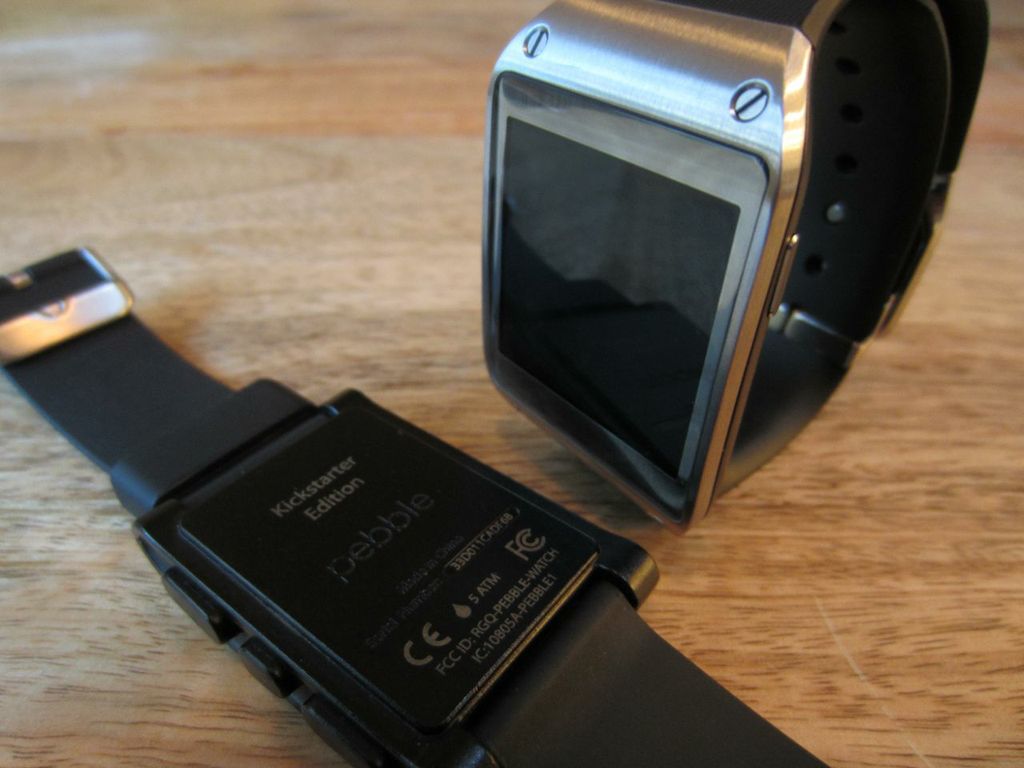 In attempting to offer fashionable options, both smartwatches do come in various colors: six for the Gear, including lime green, wild orange and jet black; and five for Pebble, including their signature red as well as white and orange.

Winner: Samsung Galaxy Gear. The Gear offers much more from a hardware perspective, and its design is much more compelling. 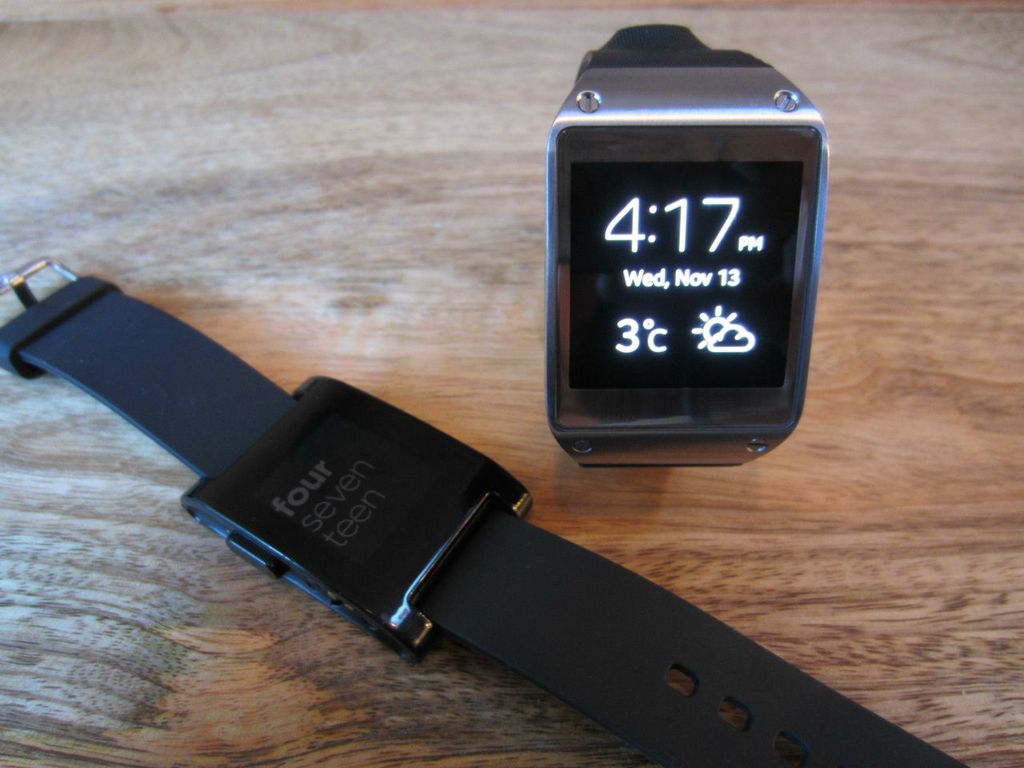 The Galaxy Gear boasts a 1.63- inch Super AMOLED color touchscreen with a resolution of 320x320pixels . The screen is pretty sharp and bright, making it extremely easy to tell the time, read messages and even view pictures.

As the screen size is quite wide compared to the Pebble, reading an email or text message is quite easy. The glossy screen on the Gear does make it more challenging to see in the sunlight, but not as much as what you find on Samsung smartphones.

The Pebble watch uses a sharp memory LDC, which is a type of e-paper that has a contrast of e-ink but with a much better refresh rate. This makes Pebble’s monochromatic screen much easier to see in any lighting condition. And although the screen isn’t as bright as the Gear, the Pebble does offer the ability to flick your wrist to activate a backlight for better viewing in the dark.

The Gear and Pebble allow you to change your watchface through the companion app. Both offer a selection of watchfaces to choose from right within the app as well as the ability to download third-party watchfaces on the device. The Gear also lets you choose the default background colour of the screen as an additional personalization option.

Winner: Samsung Galaxy Gear. If we are only looking at display and not its impact on battery life, there’s no competition between the Pebble and the Gear. The Gear’s screen quality impressive and interacting with it is very much like your smartphone or tablet. 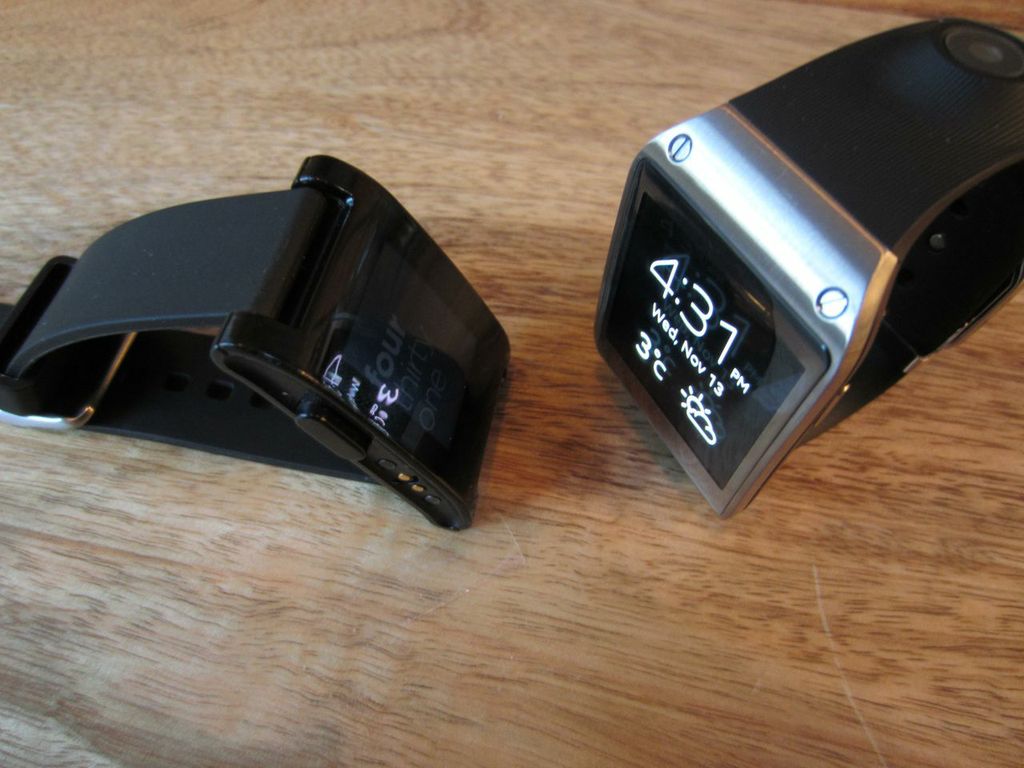 Both the Pebble and Samsung Galaxy Gear rely on a constant Bluetooth connection to communicate with smartphone apps to offer core functions like notifications.

To mitigate its impact on battery life, both smartwatches employ the use of Bluetooth low energy (LE). Pebble actually toggles between Bluetooth 2.0 and LE depending on the use case.

I found the Bluetooth connection on the Pebble far more reliable than that of the Gear. Samsung’s smartwatch connection often dropped and required me to reconnect various times throughout the day. This was not an issue I came across with the Pebble.

The battery life of the Pebble is also far better than the Gear. Pebble suggests that their battery should last up to seven days. With regular use, I’ve found that the Pebble lasts about five and a half days before it needs a charge. Samsung indicates that you should be able to get a day’s worth of battery out of the Gear, but I’ve actually found it can go for two days without needing a recharge.

If you are used to plugging in your phone at night then charging your smartwatch shouldn’t be an issue; one usually takes his or her watch off before bed anyways. Both the Pebble and the Galaxy Gear have pretty quick charging times. Pebble charges in about two to three hours whereas the Gear charges up in just over an hour.

Winner: Pebble. This smartwatch is the clear choice if you are looking for a device that is reliable and can be worn for days without needing an outlet. 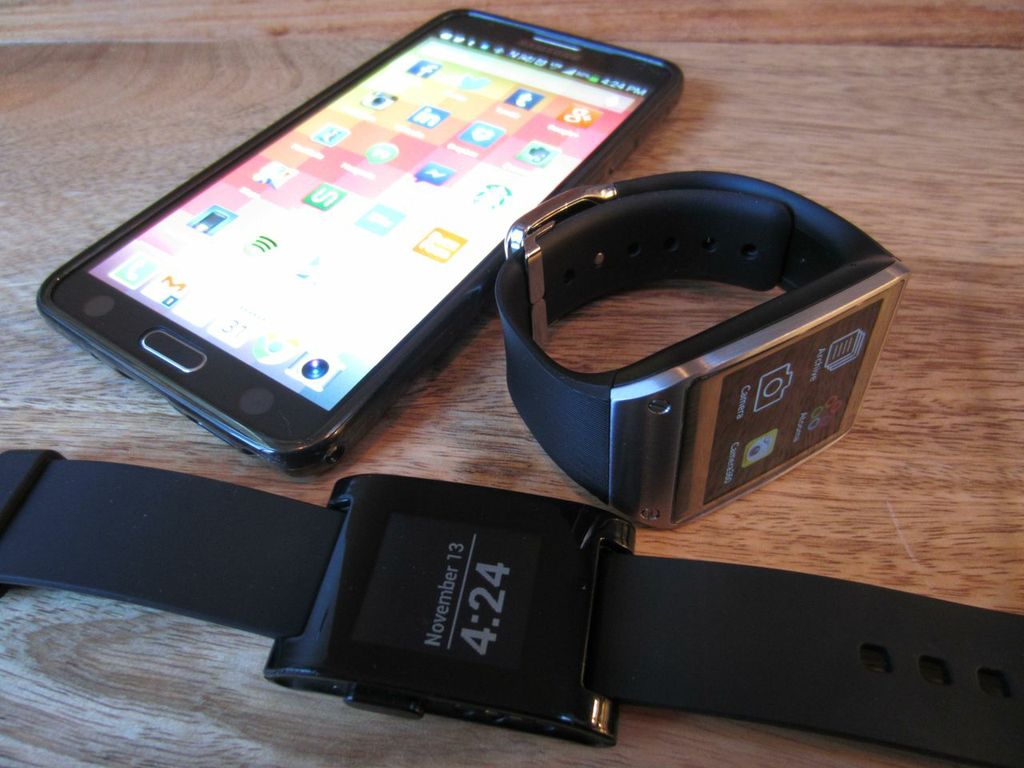 A smartwatch is not (yet) smart without a smartphone, which acts like the brain of the timepiece. It provides the watch with most of its functionality through an app that facilitates things like notifications, GPS, and in the case of the Gear, initiating calls.

The Pebble smartwatch supports both Android devices running OS 2.3 and up and iPhone 3GS devices running iOS5 or newer. iOS7 will be required to take advantage of pushing alerts from the iPhone’s Notification Center to your Pebble.

The Gear only supports Samsung devices equipped with Android 4.3. At launch, it only worked with the Note 3 but will soon support the Galaxy S4, Note II and Galaxy S III when they are upgraded by the carriers this month. The Galaxy S4 mini and the Galaxy Mega are also expected to be added in the coming months.

Winner: Pebble. If you are an iPhone or non-Samsung smartphone user, the Pebble is the only option between the two. 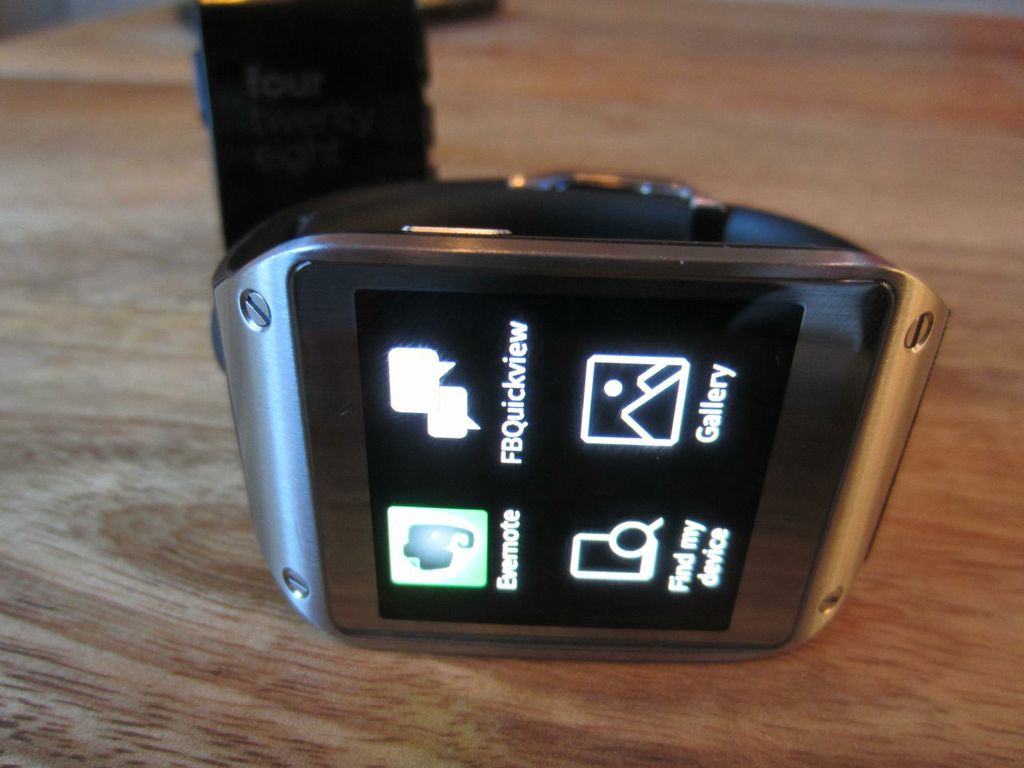 Both the Gear and Pebble function as a watch as well as a smartphone companion, providing notifications when you get a call, email, text or any other type of alert you normally see on your phone.

For Pebble, only iPhone users running iOS7 have the ability to get all the notifications you get in the Notification Center; Android users were able to do this since launch.

The issues with notifications on the Gear are expected to be fixed through a firmware update [see here]. This update will allow all notifications to be received on your Gear, including those from apps which aren’t proprietary to Samsung, like Facebook, Whats App and Gmail.

There is no news on whether the firmware update will fix the connectivity issues and the inconsistency in receiving notifications from supported apps, both of which we’ve encountered during our use of the Galaxy Gear. As the firmware update hasn’t arrived for us yet, we’ll update this post and let you know the full scope of enhancements when it does. 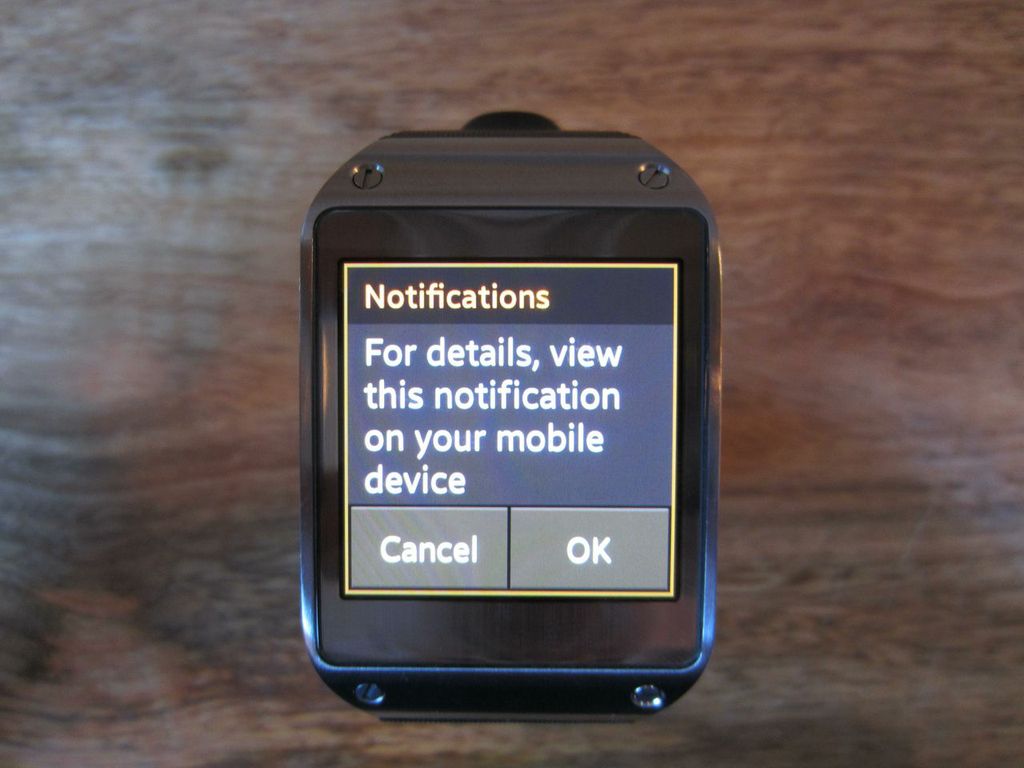 The Galaxy Gear does boasts more bells and whistles compared to its more simple and focused competitor. Dubbed the “Dick Tracy Watch,” Gear can make or take calls, control various applications with voice and even take pictures and video with the camera on the side.

Winner: Pebble. Even though the Galaxy Gear offers much more than Pebble with its voice commands and camera, the Gear often struggles with its ability to provide meaningful notifications, something a smartwatch has to do well. 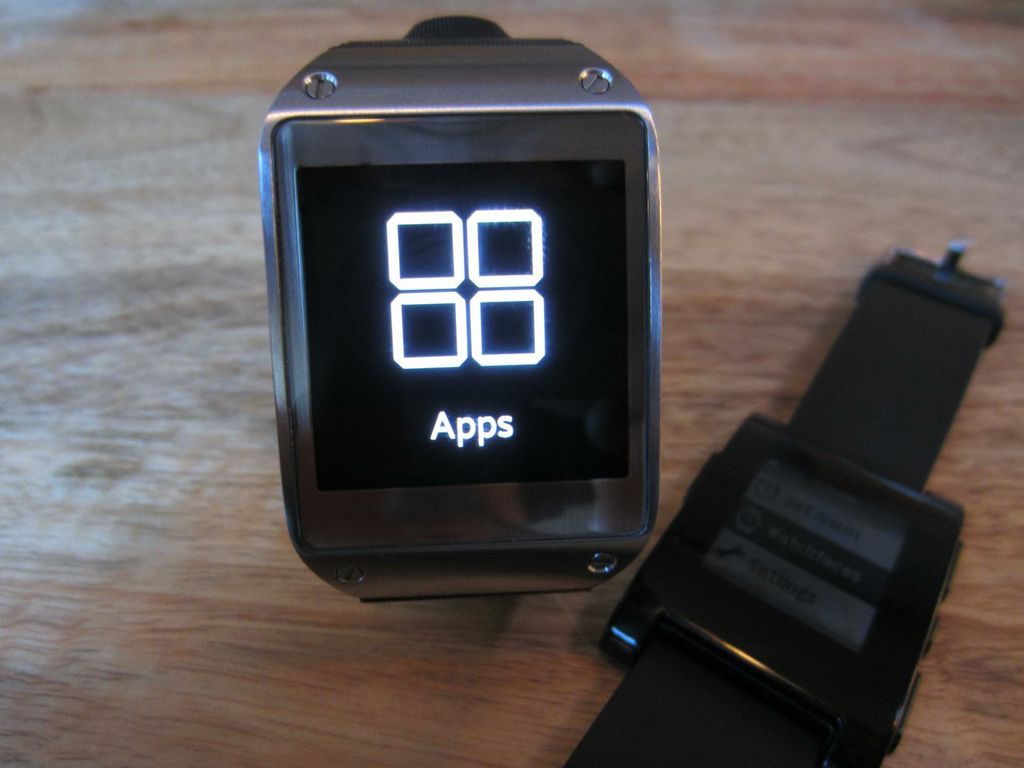 Both the Galaxy Gear and Pebble offer applications and watchfaces for download and use on the smartwatch. Pebble has many more apps than the Gear, with over 2,200 apps to choose from myPebbleWatchfaces.com, compared to 70 or so on the Samsung App Store for the Gear.

Despite the relatively small selection, the Gear apps offer much more than Pebble’s, mostly due to the quality of the screen and the fact that they take better advantage of the device’s functionality. Pebble’s new SDK now provides developers with access to more of the device’s functionality, which means we may see more robust apps available in the near future. That being said, because the Gear has more to offer from a hardware perspective, there is only so far the apps can be taken on Pebble compared to Samsung’s device.

Apps like Path for Galaxy Gear use the camera to share pictures right from your watch and Gear’s Evernote uses voice to record a note. Interacting with apps on Galaxy Gear feels much like those on your smartphone due to the touchscreen compared to the retro up/down/select buttons of the Pebble.

Gear’s app offering also includes some bigger names such as eBay, Path, Highlight, Glympse, Evernote and Zite. This gap is expected to narrow as Pebble recently announced that big brands like GoPro, Foursquare and Yelp are jumping on board to build apps for this device.

Winner: Galaxy Gear. The apps for Pebble and Galaxy Gear really help prove the potential of these devices but the Gear’s hardware allows developers to do so much more with the device, making their apps more interesting and robust. 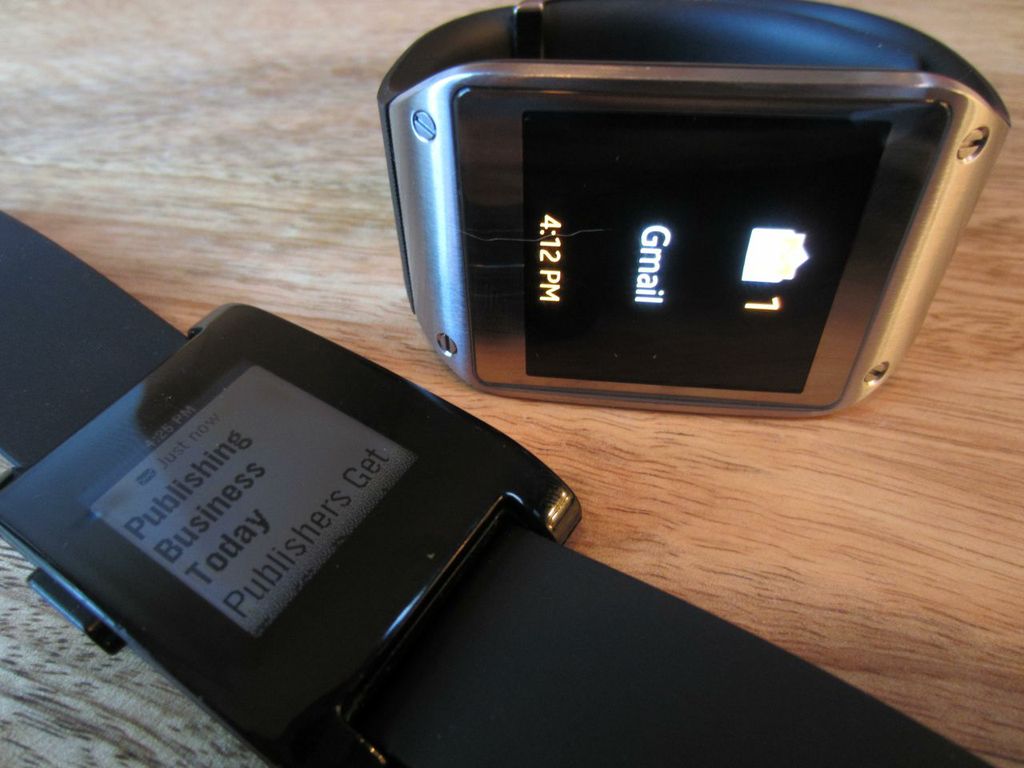 At $329.99, the Samsung Galaxy Gear is not for everyone, especially since only Samsung device owners are the only ones that can actually use it. And despite the fact that it really packs a punch with its display and features like the camera and voice commands, there are a number of kinks to work out for it to shine.

The $149.99 Pebble may not offer the same functionality as the Gear, nor look as flashy, but its reliability, device support and affordability give it a leg up in the smartwatch race.

Overall Winner: Pebble. If we had to choose a smartwatch, it would have to be the Pebble if only for its compatibility. But Pebble is our choice because of its reliability in being a watch and a “smart” notification device.