Sundar Pichai, Google’s newly-crowned head of both Android and Chrome, will be hosting a “breakfast” press conference next Wednesday, likely talking about new Android developments.

We’ve barely seen anything product-related from Google since its developer conference, Google I/O, in May, but have continually heard leak after leak suggest that a new version of Android, alongside a refreshed Nexus 7, is imminent. 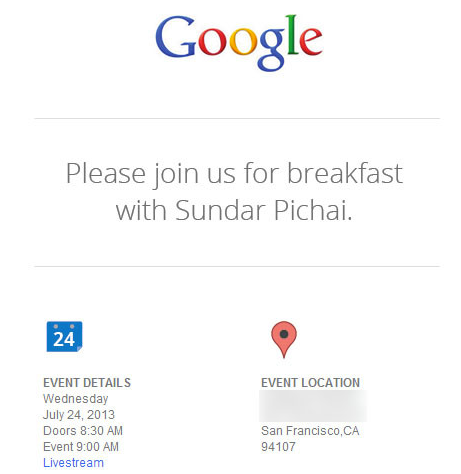 There is also the question of the Moto X, a tech demo of which was leaked last week, promising an August release date. The highly-anticipated smartphone from Motorola will usher in a new era, according to Google, of collaboration between the hardware manufacturer and its software division. It’s unlikely that Moto X will be announced during this breakfast, but we’re getting dangerously close to August, so something will have to be said soon enough.

The event starts next Wednesday, July 24th, at 12pm ET/9am PT. It will be livestreamed on Google’s website, and we’ll update this post with a link when he have more details.