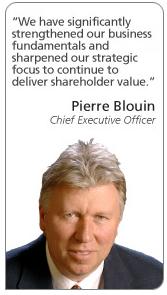 Once completed, targeted end of 2010, this will cover 97% of the population and will have the ability to bring in new handsets. Pierre Blouin, Chief Executive Officer, MTS Allstream said “This announcement is a win for wireless customers in Manitoba, who will benefit from this innovative approach to investment in next generation wireless services and access to the best available national and international roaming. This plan was developed following a careful evaluation of our different options. Our agreement with Rogers will allow us to deploy the HSPA network in Manitoba in a cost effective manner, allowing us to maximize the effectiveness of our capital spending and accelerate plans to launch a new integrated billing platform.”