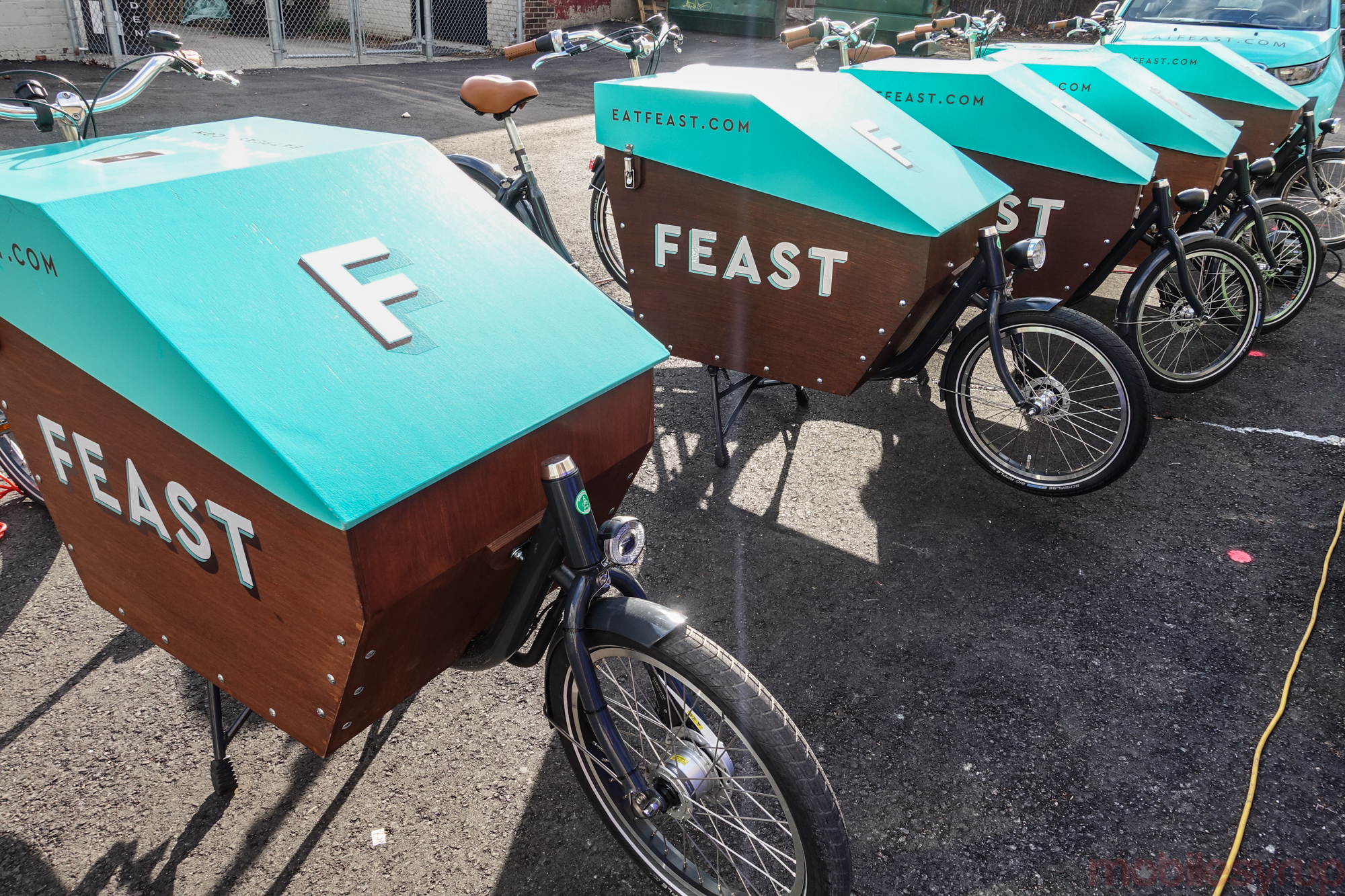 It’s warm for mid-December and I’m sitting on a park bench on Toronto’s east side, bare trees swaying softly as a streetcar briefly rattles in the distance. A small dog sidles over, perhaps playful, perhaps catching a waft of the mushroom and potato soup sloshing around in a biodegradable container I’m cradling in my gloveless hand.

The soup is thick and meaty for a vegetarian dish, large pieces of potato interspersed with the roughly chopped creminis and pureed vegetables. It may just be the sunshine, or the quiet, but I’m fairly certain this is the best soup I’ve ever eaten. When the container is empty, I want more; even today, nearly a month later, I can’t stop thinking about that soup. 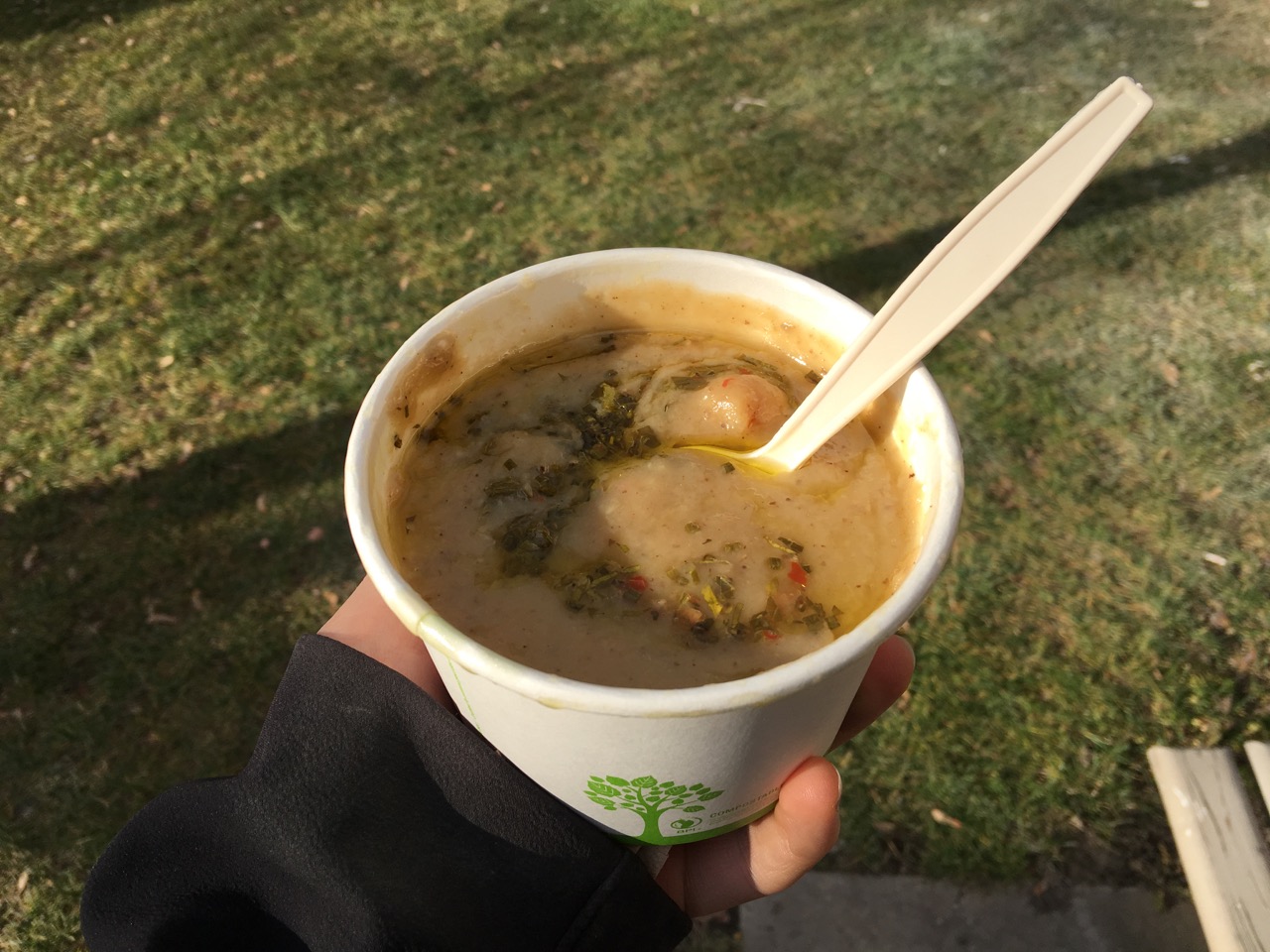 I had been visiting the headquarters of a new Toronto food delivery startup called Feast, an ambitious project run out of Jamie Kennedy’s former Gilead Café.

The space, converted from an open-concept restaurant into an enormous prep kitchen slash development shop, houses some of Toronto’s most notable chefs, like Curt Martin of THR & Co., creating a revolving (and evolving) menu of high-quality travel-friendly dishes delivered by cargo box-converted Danish bike anywhere in Toronto’s downtown core. 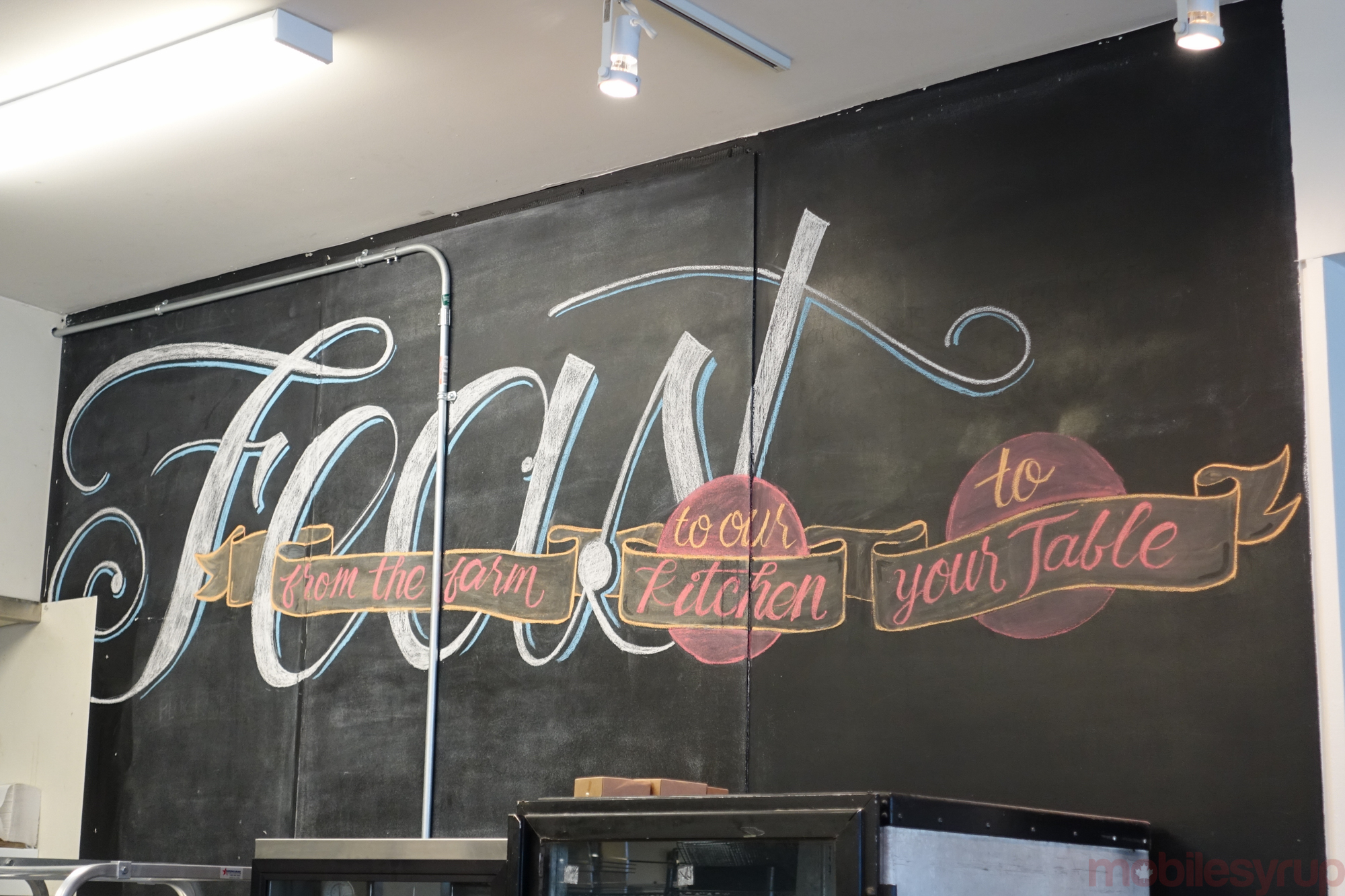 The brainchild of Steve Harmer, former general manager of the Toronto arm of digital marketing firm, Blast Radius, Feast bills itself as a “full-stack food technology company” trying to solve the perpetual problem of finding healthy and high-quality to places to eat around the city.

“It is a ripe time to disrupt the food delivery market. Today’s customer is looking for more healthy, local and organic options in their food and we are delivering this to them,” said Harmer during an interview with MobileSyrup. He brushed off the notion that Feast was entering a market saturating with incumbents like Uber and upstarts like Ritual and Grabb, all vying for the same demographic of health-conscious office-dwellers.

“UberEats, Ritual and Feast can all coexist and be part of the natural ordering cycle that people go through. The great thing about the food market is that it is not a winner take all situation. Feast is unique in the fact that we are a full-stack food provider, meaning we source, cook and deliver our own food,” he continued. 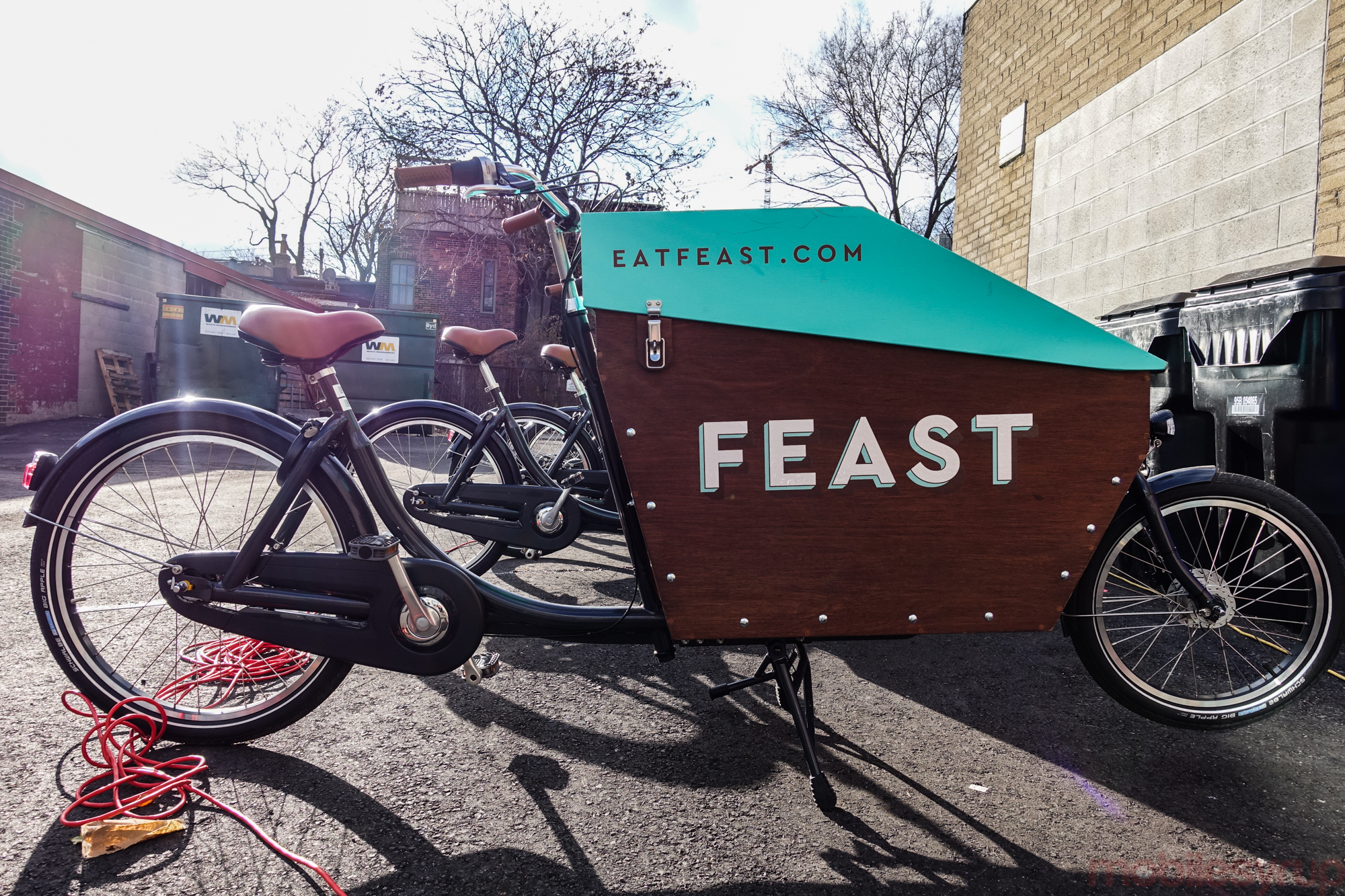 Launched in November, Feast wants to scale slowly, so it has limited itself to a two-and-a-half hour weekday lunch window of 11am and 1:30pm, with strict borders based on service guarantees. According to chief marketing officer, Paul Cowan, Feast’s strict focus on customer service and out-of-bag food quality currently limits its working area to Toronto’s downtown core and marginal perimeters to the east and west. He says that this year, Feast plans to open satellite kitchens in Toronto’s west and north ends to accommodate more customers.

Feast puts an enormous amount of attention into the quality of its ingredients, which is why the individual dishes — today a $10 Ontario Heirloom Carrot & Quinoa salad, a $9 Wild Mushroom & Potato soup, an $11 Shaved Roast Beef sandwich, and a $13 Seared Albacore Tuna Niçoise salad — are 10 to 15 percent pricier than what you’d find on a service like UberEats, though Feast doesn’t currently charge a delivery fee. Cowan says that Feast’s customers, many of whom are repeat clients, enjoy the narrative quality of each dish, which is told in “liner” notes on the app, and are happy to pay a slight premium. 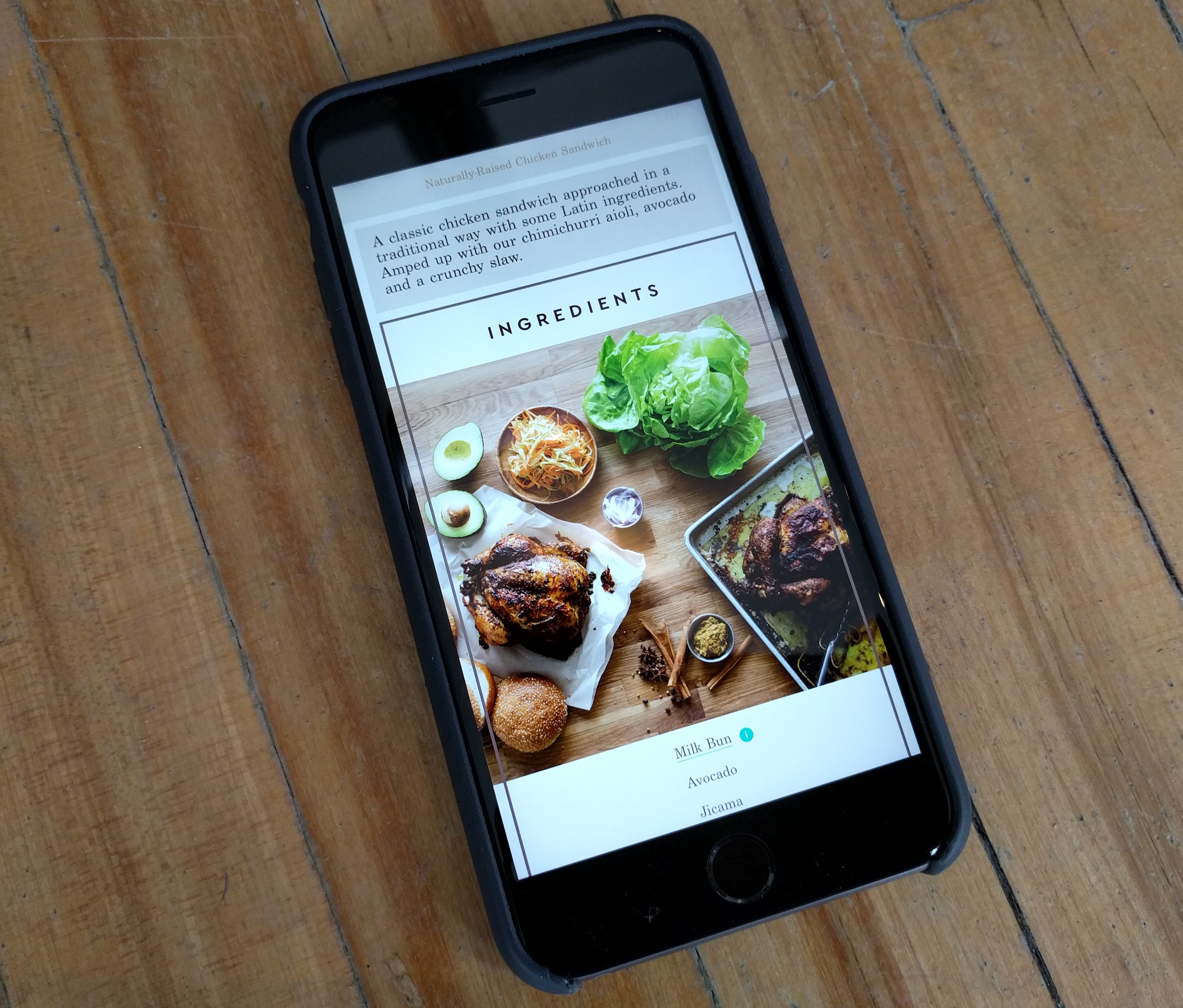 One can check out, in a gallery of beautiful photos arrayed professionally below meticulously-crafted copy, how the team prepares each main, and discover the various farms and vendors they use for staples like chicken, beef, and bread. There’s a cookbook-like quality to each explanation, and you can picture a Feast-branded book of recipes sitting on some living room coffee table in the not-too-distant future.

To deliver the food, Feast’s product team travelled to Denmark to find the perfect “cargo” bike amenable to retrofitting with ample container space and, for warm dishes, a battery-powered heater. As with other dispatch-based startups, including Hurrier and UberEats, Feast outfits its delivery team with Android-based smartphones with a custom app that coordinates roving bikers to their closest delivery. When they run out of food, the bikers don’t need to return to home base; instead, one of Feast’s half-dozen branded BMW i3 electric cars meets them at a pre-assigned point. 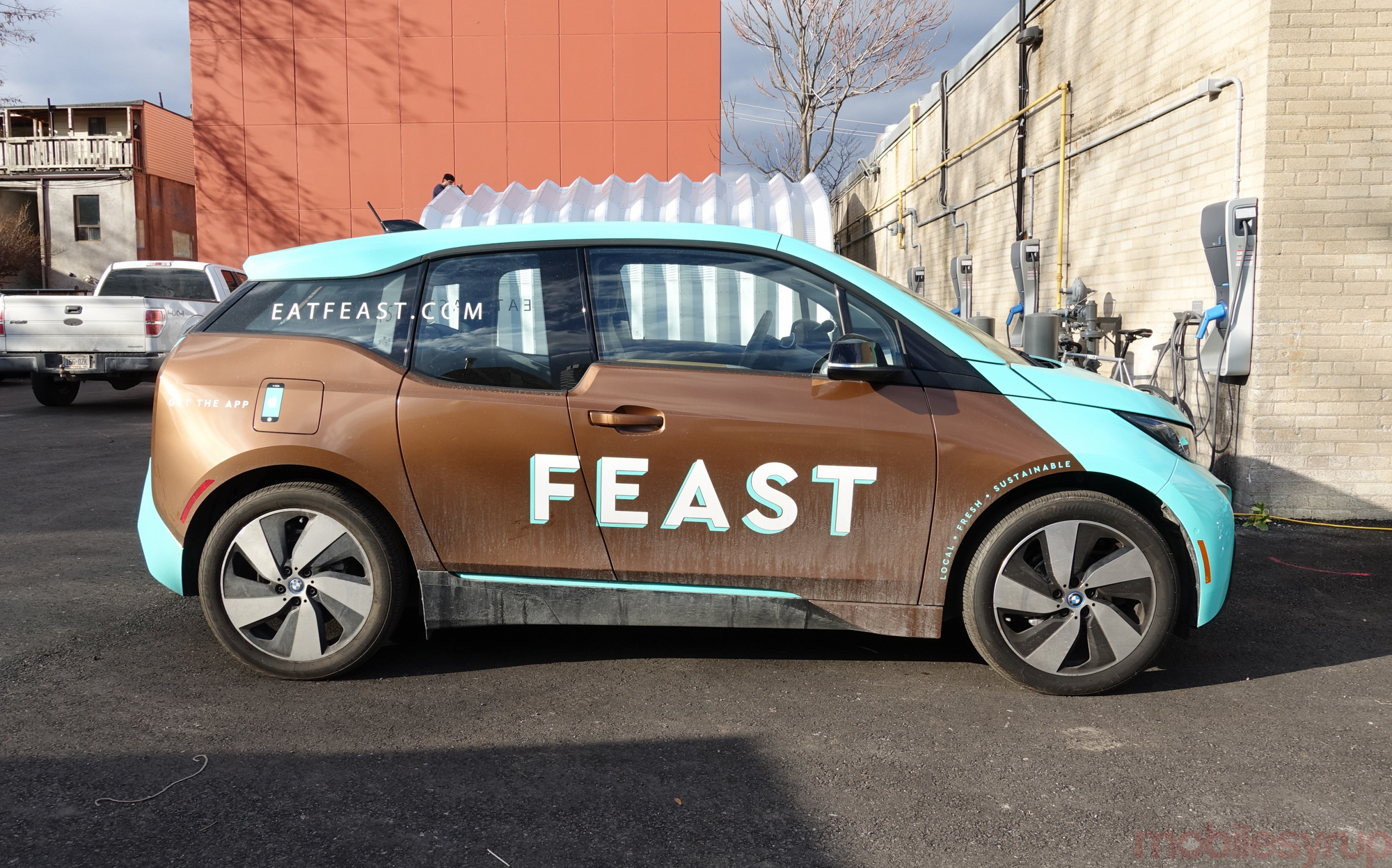 “Torontonians care about the environmental impact of their daily activities and ordering a locally sourced, organically raised, chicken sandwich for lunch, delivered by bike or electric car is a choice that they will always feel good about,” Harmer told me. He’s very proud of the how closely Feast hews to the “farm-to-table” methodology, which he hopes will increase towards the summer months, as Ontario’s farms unspool from their wintry downtime.

Despite only being active for under two months, Feast has been well-received in the Toronto community, with, according to Cowan, 240 percent user growth week over week, and, the crown jewel in the company’s metrics crown, 37 percent repeat usage per customer.

Feast says its main advantage is in its “full-stack” approach to running the business. Unlike UberEats, which coordinates the pickup and delivery between a partner restaurant and its drivers, Feast can control the quality of the ingredients, the temperature at which it is delivered to the customer, and everything in between. “Our food is chef-designed to be higher quality, to work perfectly with our packaging and be the same standard when it left the kitchen until it arrives at your door,” said Harmer.

Soon, the company will roll out dinner service across the GTA, and then later in 2016, expand to more cities in the U.S. and Canada. Harmer thinks there is enormous potential in this kind of business model, and to prove it has bootstrapped the business himself, though he is seeking expansion capital at the moment. 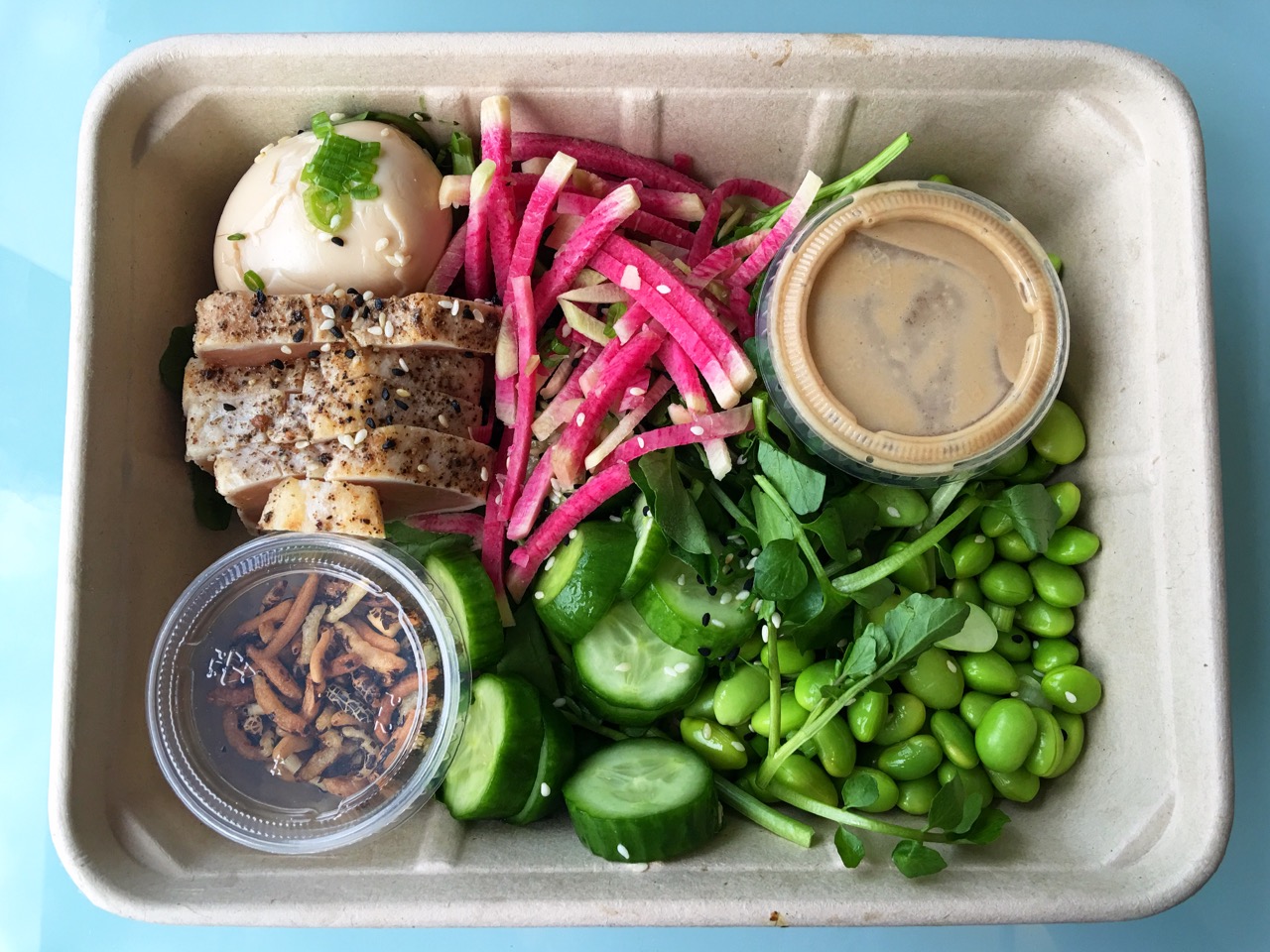 Back in the office, my order arrives, and despite the bumpy roads the chicken sandwich is still warm, and the Black Bird milk bun provides the perfect amount of crunch. Like the soup, the ingredients are clearly of higher quality than anything I’d make at home, and the presentation doubly superior. Like a good song, it’s a meal that lingers, and an experience you don’t want to end. It also strikes me that, as seasoned as the company’s core team is, the startup is still young, and scale will prove the ultimate test. Good food is hard; good food delivered intact, warm, and on time, on a bike, during cold, snowy Canadian winters, is even harder.

On the way home, I think about what to make for dinner, a container full of cold pasta taunting me miles away.

Feast is available to download on the iOS App Store.