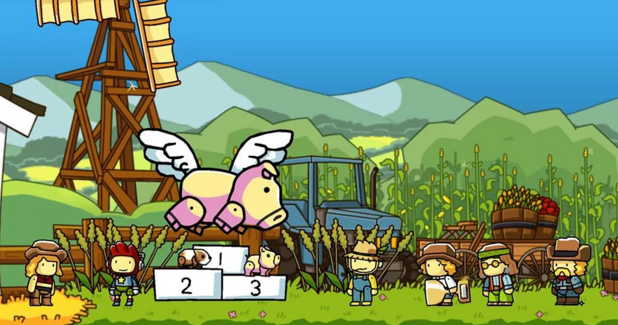 Though the franchise seems to have gone on a brief hiatus for the last few years, there was a time when Scribblenauts was everywhere.

And now the latest entry in the series, 2012’s Scribblenauts Unlimited on the Wii U, has made its way to iOS and Android. The Wii U version of the game can be played almost entirely on the console’s GamePad, so it makes perfect sense that the title has been ported to touchscreen mobile devices.

The draw of the Scribblenauts series has always been the ability to create almost any object imaginable in order to solve the game’s puzzles. Need to move that pig to a floating trophy? Write ‘jetpack’ and then attach your creation to the pig. The animal will then fly up to the trophy. Maybe you’d rather create a flying Chutuhlu and get it to carry the pig? You an do that, too. Scribblenauts is a series that lets the player solve puzzles however they want.

Scribblenauts Unlimited on Android and iOS seems to be a faithful recreation of its Wii U counterpart, although Nintendo characters like Mario, Link and Samsus obviously aren’t part of the game. The game also unfortunately features $1.99 in-app character purchases that add new levels and character packs to the game.

The series previously made its way to mobile with the 2011 release of Scribblenauts Remix, a port of Super Scribblenauts for the Nintendo 3DS.

Scribblenauts Unlimited is available on iOS for $5.79 and Android for $6.66.