Star Wars: The Force Awakens is nearly upon us and the blockbuster brand’s merchandising efforts are pumping out toys and related content faster than a heated Lightsaber battle.

The latest Star Wars infused experience allows users to add a dash of The Force to their suite of Google applications. The new feature gives you the choice between joining the “Light” or “Dark Side” and then adds a Star Wars The Force Awakens skin to the experience. Opting out of the feature can be performed by selecting “Change Account” and then “Back To Default.” 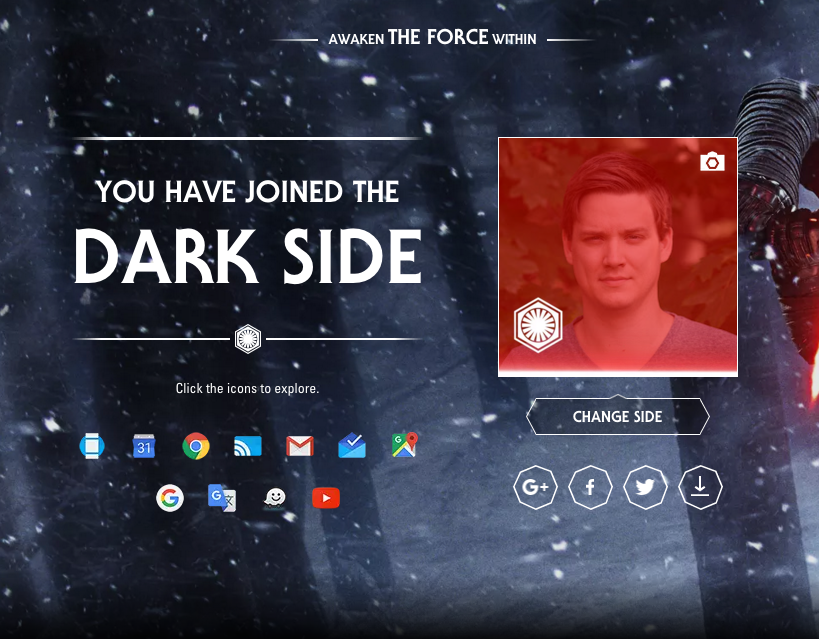 In Gmail, a blue or red Lightsaber replaces the standard loading bar and the background transforms into Light or Dark Side images. With Google Maps, the navigation icon has been turned into a TIE fighter or X-Wing, Pegman has been transformed into a Stormtrooper or Resistance Pilot, and light or dark icons replace standard home and work icons.

Other notable Star Wars-influenced apps include, Google Calendar, where key movie milestones have been added, and Google Now, which gives users “this day in Star Wars history facts.”

Check out google.com/starwars to get access to the undeniably cool overlays.