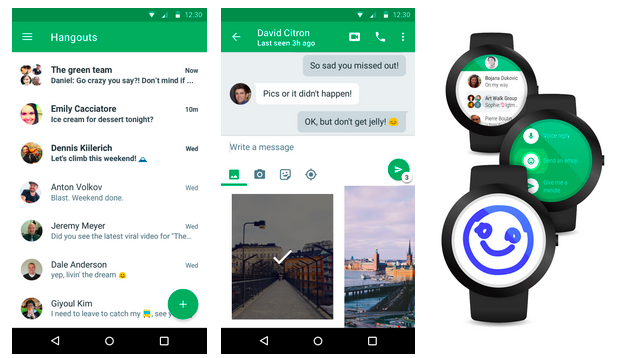 The Android version of Hangouts has received a Material Design overhaul, which came to iOS earlier this summer. Design-wise, it refers to Inbox, with a Floating Action Button and Suggested People list, adding a number of fluid animations that look and feel great on Lollipop.

Like the iOS version, attachment sharing has also been simplified. Users can quickly select from photos in their gallery, or quickly post an emoji, sticker, GIF, or location widget within a conversation.

Perhaps more importantly for users on older devices, Hangouts is considerably faster, less buggy, and more battery conservative than it used to be. The company says it has been “obsessively fixing bugs and speeding up message delivery to make Hangouts faster and more reliable.”

Lovers of the old Google Talk will enjoy the fact that custom status updates have returned, along with outbound caller ID when initiating a phone call from Hangouts Dialer, the optional phone call companion to Google Hangouts. Users can make calls to any number in the U.S. and Canada for free from within the app, and calls to other countries are heavily discounted compared to most telco long distance plans.

The update is rolling out slowly to the Play Store over the next few days, but our friends at APKMirror have the APK ready to go for your sideloading pleasure.

Google extends classic Hangouts support until June 2020 for some

Google Play Store Material redesign rolling out to everyone [Update]