Google announced today that tickets for its developers conference, Google I/O, will go on sale April 8th until April 10th, at which time the company will complete its random allocation.

See, unlike years past, Google will be issuing tickets randomly to potential conference-goers, eliminating the typical server-crashing rush to be first. Users who register for I/O between April 8th and 10th will be randomly selected to attend, with tickets running $900 for general admission and $300 for academics. If, for whatever reason, you’re selected but choose to decline, the ticket will be offered to someone else.

Those who don’t attend can follow the two-day conference, which takes place on June 25th and 26th, from the various livestreams at Google’s I/O portal. Even if you’re not interested in I/O, check out the website — it’s gorgeous.

Google I/O has typically focused on improving the development experience for Android and Chrome OS, but in years past new versions of Android have been announced, as well as platform tools, apps and new products. 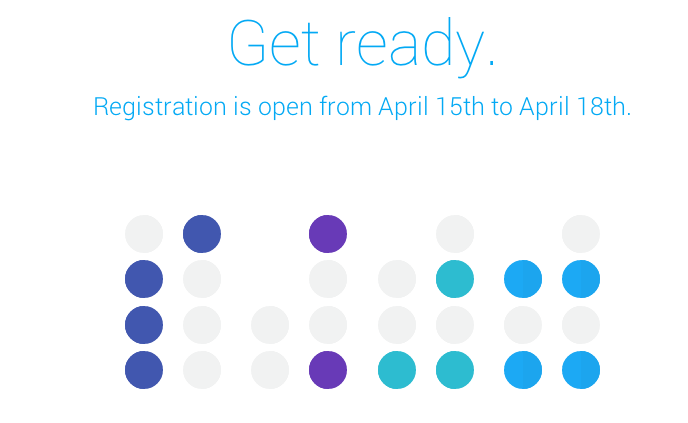 Update: Google posted an update on Google+ that states I/O registrations has been pushed back a week – now happening April 15th to 18th. Google Developers say they are “still working to make the registration process even easier,” but didn’t give any specific details as to how. This year will bring a lottery system forward and “applicants will randomly be selected” and notified via email if they’re heading to San Fran.

Update #2: Google I/O registration opens today, and will continue until Friday the 18th. Registrants will be randomly selected, so don’t worry about rushing. Good luck!

Update #3: Google I/O registration is now open and Google notes that we should “Sit back and relax. You have until 2:00 PM PDT on April 18 to submit your application to attend.” test your luck and register here.