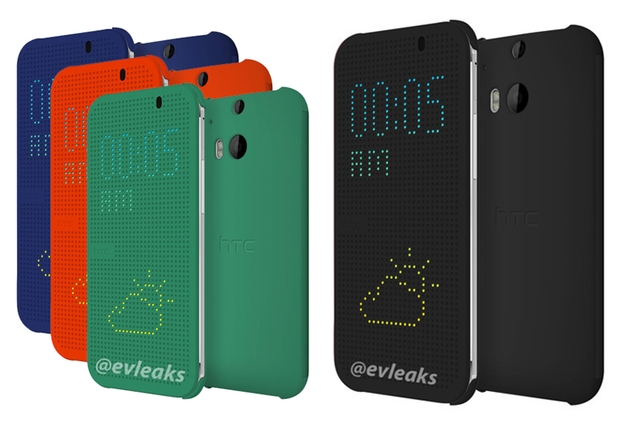 HTC isn’t going to let a bunch of leaks muffle the excitement for its upcoming One refresh. But here is another reason — a leak — to look forward to the device. As the days draw closer to a final reveal, new details have come to light from @evleaks about one of HTC’s new cases, and this one is pretty interesting.

It looks like HTC is readying a “Dot” case, which covers the screen with minor circular perforations that project the time and date, though it could potentially show other statuses within the phone, like music playing or battery percentage. What’s unclear is how the dots are generated; one possibility is from the screen below, but since HTC tends to use Super LCD displays, which differ from Samsung’s per-pixel-powered Super AMOLED displays, the entire display would have to be alight to generate the image.

The more likely scenario is that the case, which covers both the front and back of the device, is self-powered, or powered by the phone, either through wireless charging or pins on the bottom of the device.

Either way, it’s an ingenious way to convey important information in a retro stylish that harkens back to the dot-pixel era of the 80’s. It looks like the case will be available in a bevy of colours in addition to the traditional black.

Will you buy the Dot case with the all new HTC One?