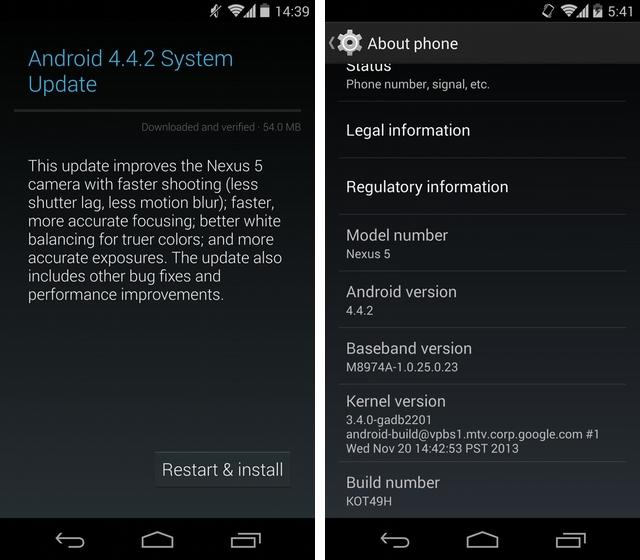 We’re getting reports that only days after receiving Android 4.4.1, various Nexus devices, including the Nexus 5 and Nexus 7, are receiving another update to Android 4.4.2, build number KOT49H.

While there’s no word on what has been updated this time around around — the generic update blurb is the same as the former one, indicating optimizations to the camera and “other bug fixes and performance improvements” — the 52.8-54MB file appears to be a hotfix for some tragic oversight in the former software. If you already have Android 4.4.1, the OTA update is 1.7MB.

Nexus 5 users who don’t want to wait can sideload the OTA .zip file from this link.

Nexus 4 users who don’t want to wait can sideload the OTA .zip file.

Nexus 10  users who don’t want to wait can sideload the OTA .zip file.

Update: The Android 4.4.2 update appears to fix some issues related to security, and likely resolves a recently-outed SMS bug that affecting the Nexus 4 and Nexus 5. It appears Google rolled out Android 4.4.1 to a small number of users (which is why so few people received an OTA update for it) and determined that a few remaining bugs remained. After fixing them and packaging a new build, which is this Build KOT49H, they resumed the rollout.