BlackBerry 10 L-Series and N-Series are in the works, according to leaked doc 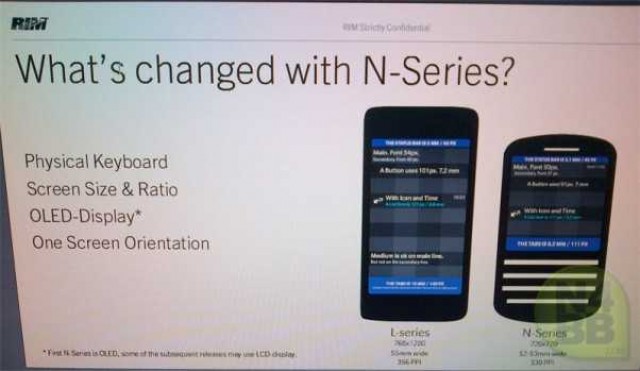 RIM has stated several times that the first BlackBerry 10 device will be an all-touchscreen smartphone. This will be followed up by a physical QWERTY keyboard. New details today have leaked online that reveal RIM will make an official BlackBerry 10 device announcement in August, specifically the BlackBerry L-series and then the N-series. An internal doc posted online by N4BB shows the L-series will have a 768×1280 screen resolution, 356 PPI (Pixels Per Inch), and will be 55mm wide. This currently looks like the Alpha device that developers are using, like a mini-PlayBook. As for the N-Series (previously codenamed Nevada), will reportedly come in with lower specs, sporting a 720×720 screen resolution, between 52 – 53mm wide, have 330 PPI, and a physical QWERTY keyboard (similar to the current flagship Bold 9900).

As for release dates, RIM has always stated that BB 10 will launch in “the latter part of 2012,” but 4BB reports that we might see the BlackBerry L-series “as early as the first half of September,” and the BlackBerry N-series sometime during Q1 2013.