Samsung GT-i9300 shows up in benchmark, looks to have overclocked Mali-400 GPU 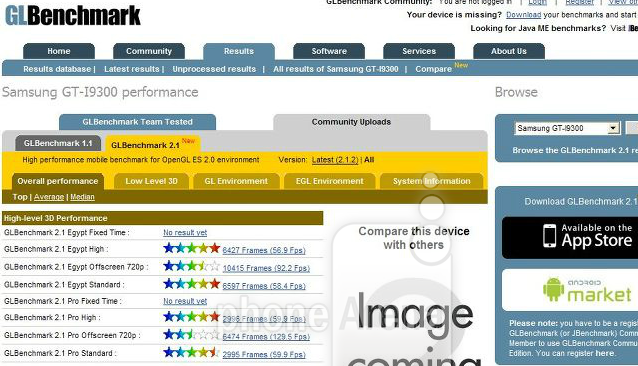 A preliminary benchmark of the upcoming Samsung GT-i9300, aka what we suspect is the next Galaxy, has showed up on GLBenchmark, one of the most popular multi-platform suites, and it looks quite positive.

Though the tested device might be a prototype and lack final hardware specs, it appears that the chip employs an overclocked version of the Mali-400 MP GPU, though we can’t state how many cores it has. The GT-i9300 is suspected to have a quad-core Exynos processor, so a quad-core GPU might be too much for the limited battery on the device. Instead, a quad-core CPU with a ridiculously fast dual-core GPU (basically the opposite of the new iPad) should work wonders for both OS- and gaming performance.

The Mali-400 is still considered to be one of the fastest GPUs on the market, bested at the same clock speeds only by the PowerVR SGX543MP4, that aforementioned iPad 3 chip. The GT-i9300 beats even the graphics scores of the iPhone 4S, which is usually the fastest on GLBenchmark due to its advanced GPU as well.

While we can’t say whether the Mali-4oo, or a variant of it, will show up in final hardware, the prospect for the Galaxy S III to be a killer device is pretty real.