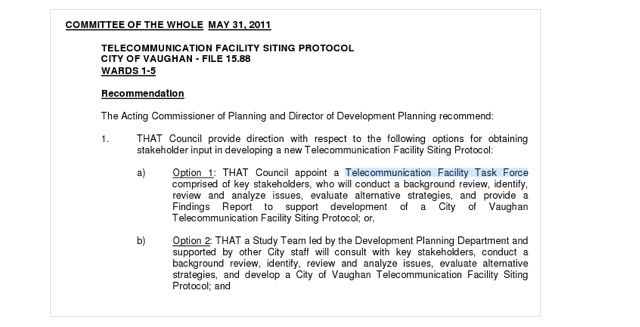 As people start to ditch their home phone a wireless device the carriers are scrambling to find locations to put cellphone towers. Nobody really wants to have a new tower put up near their property but they demand the solid reception. The City of Vaughan has decided to create a “Telecommunication Facility Task Force” with a focus specifically on towers and antennas. There will be a minimum of 5 members and a maximum of 12 members but the good news is that up to 3 members will be from the general public so concern will always be heard. The other members are from Industry Canada, Health Canada, Region of York Medical Officer of Health and Members of Council.

The official description of the Telecommunication Facility Task Force “is to bring together various stakeholders to develop recommendations for siting telecommunication towers and antenna facilities in the City of Vaughan. Upon Council’s appointment of the Task Force, members will have nine to twelve months to provide a Findings Report for consideration at a future Committee of the Whole meeting.”

In the end it’s Industry Canada that decides where towers will be put up.