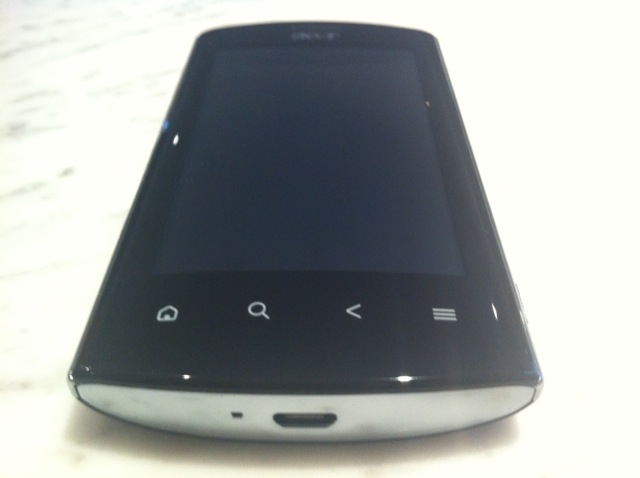 With the growing popularity of the open source Android OS combined with an affordable, entry-level smartphone comes the market flood of devices from various manufacturers trying to establish a brand and reputation in the mobile device market. Enter Acer and their extensive line of computers, laptops, and recently expanding smartphone lineup. The Acer Liquid Metal (MT) sports a 3.61” capacitive touchscreen with a resolution of 480 x 800 pixels WVGA and contains multi-touch (pinch to zoom), proximity, and light sensors. The Liquid Mt is approximately 115mm (tall) x 63mm (wide) x 13.55mm (thick), and weighs around 135g.

AESTETHICS:
The Liquid Metal is encased in a black plastic and chrome trim, while the battery panel is made out of a mocha stainless steel. This mocha panel has lined etchings (with Dolby Mobile branding), providing a sleek, metallic look to the device. Both the front and back of this device are elliptically curved, making the screen seem bigger and brighter than stated in the specs. These ergonomic curves make the device sit nicely in the palm of your hand and pocket. The Liquid Metal feels solid and durable without excessive weight, but is thicker than the average device currently on the market.

SIDE NOTE: The black plastic and stainless steel chasses are definitely not fingerprint friendly, as I often found myself wiping away fingerprint oil, streaks, smudges, etc.

The front of the Liquid Metal houses a 3.61” capacitive touchscreen with 480 x 800 WVGA, which is impressive for a touchscreen less than 4”. Below the screen are four backlit, capacitive shortcut buttons for Home, Search, Back, and Menu. These shortcut buttons maintained accurate and efficient responsiveness. Similar to other entry-level smartphones (Alcatel Tribe, LG Optimus Chic), these shortcut buttons were given heaps of space below the screen. This space could have been better utilized to provide a larger screen, since both the chassis and battery seem to be able to do so. The right side of this device sports volume rockers and a camera shortcut button, while the top of the device houses a slightly raised button for power/lock, and a 3.5mm headphone jack (no features on left side of the device). The bottom of the device houses a small opening for the microphone, and a microUSB port for charging/PC connectivity.

SIDE NOTE: The top chrome platting also has three LED notification icons, which illuminate and flash notifications for missed calls, unread messages, and low battery/charging. These icons are easily visible in the dark, and allow you to keep your device holstered while checking its status (as with all Blackberries). An added bonus would have also had the inclusion of the date and time in this chrome platting, but the current setup is a step in the right direction.

The back of the Liquid Metal houses a 5.0MP camera (autofocus, LED flash, 720p HD video recoding, face detection, geo-tagging, image stabilizer, smile detection), and a 25mm (width) speaker. Sliding the back mocha, stainless steel panel up reveals a 1500mAh battery, which advertises up to 660 minutes of talk time, and/or 450 hours of standby time. A SIM slot and microSD port are also revealed upon the removal of the back panel, and are located underneath the battery (up to 32GB support, 2GB card included). 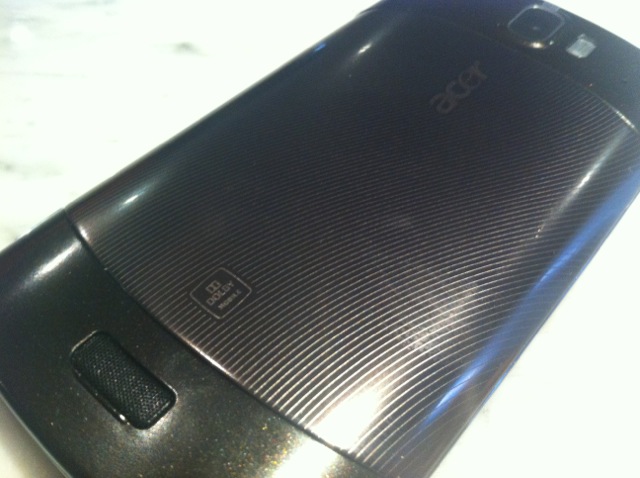 PERFORMANCE:
The Acer Liquid Metal is powered by an 800Mhz processor with approximately 50MB of internal memory, 512MB of RAM, and comes preloaded with Android 2.2.1 Froyo with Acer’s Android skin – Breeze. This device is compatible with GSM 850/900/1800/1900 and advertises speeds of 14.4Mbit/s (download) and 2.0Mbit/s (upload). The Liquid Metal is powered by a 1500mAh battery, with up to 660 minutes of talk time, and/or 450 hours of standby time. The Liquid Metal supports GPS, +AGPS, DLNA (video streaming to Wi-Fi devices), and Bluetooth 2.1, while housing a Wi-Fi 802.11 b/g/n card for Wi-Fi support. The Music player supports MP3, with the addition of a built-in FM radio, while the Video player supports MPEG4, H.264, XviD, and WMV, with Dolby Mobile sound options for video playback.

I tested the reception throughout various areas of the GTA, where I was able to consistently make and receive calls, without any dropped calls. However, these phone calls lacked clarity and volume, as it was often difficult to hear the person clearly through the front speaker, and vice versa. The speakerphone also performed poorly in terms of clarity and volume, as the back speaker was not able to pump out a loud enough sound through the tiny speaker. I was unable to clearly maintain a speakerphone conversation in the car while driving, as I was unable to hear the caller through the speaker. 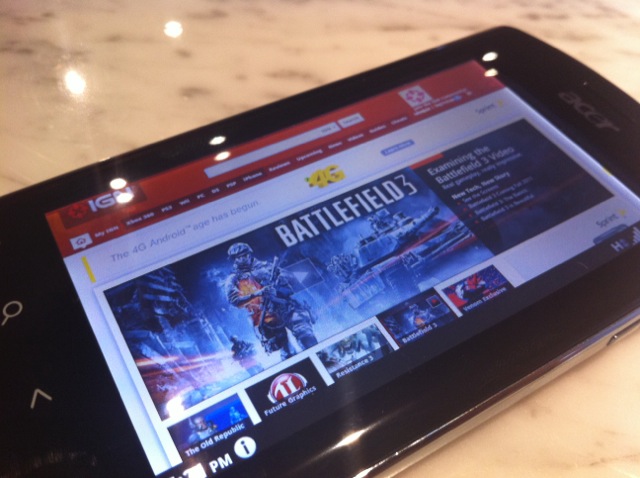 The screen size is average, compared to other smartphones currently on the market, and provides a smooth and pleasant operating experience, as text and images appear very clear and colourful on the screen. It should be noted that this screen is not very scratch resistant, and needs constant cleaning/attention due to the accumulation of fingerprint oil, streaks, smudges, etc. The capacitive touchscreen was able to quickly and efficiently process most user input, while all gestures were accurately recognized. There were instances of sluggish performance/processing, which can be attributed to the Acer “Breeze” UI and 800Mhz processor.

The web browser was similar to other experiences on Android devices; various HTML webpages were easily rendered/loaded, including pages with heavy content. The processor was able to process common scrolling, panning, and zooming gestures (pinch to zoom), as well as transitions from portrait to landscape views, however there were instances of noticeable lag. One positive of the web browsing experience on the Liquid Metal was the Web-Flash support.

The music and video player were able to handle my daily music needs and included functions for track sorting and visualization functionality. There is even support for Shake Control, which allows you to shuffle songs by shaking the device. This functionality made me quite nervous, so I often avoided shaking my Liquid Metal. The preloaded nemoPlayer app provides integration of music, photos, and video but cannot be controlled through widget or control tool, as with the stock media player. The nemoPlayer does provide a Dolby Mobile equalizer for enhanced sound options. The preloaded Spinlets app provides media streaming content, while the Media Server app allows you to share your media with family and friends. Unlike the phone call performance, the speaker was able to provide ample sound, which sounded crisp and clear through the rear speaker. The camera on the Liquid Metal produced mixed results, as some photos came out blurry and washed out. The LED flash and autofocus also did not perform as strongly as expected. The interface was quite useful and user friendly, as it contained options for altering sharpness, saturation, face recognition, image stabilizer etc. Video recording experienced similar washed out results, but overall led to a smooth experience.

The battery size of 1500mAh was more that adequate for this device, especially since it has a touchscreen less than 4”. Through various battery tests and experiments, I was able to last just under two days on a full battery charge; based on activities of light web browsing, test messages, phone calls, pictures, and gaming. 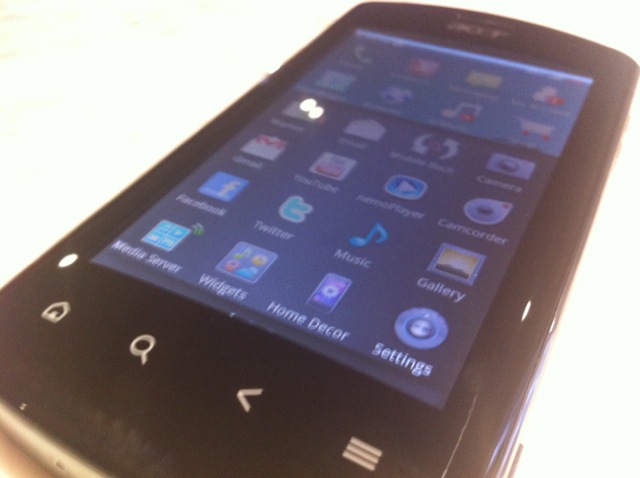 SOFTWARE:
The Acer Liquid Metal comes preloaded with Android 2.2.1 Froyo and the Acer Breeze UI, which can be toggled on/off. After some brief experimentation with the Acer UI, I determined that I felt more comfortable with the more traditional and familiar Android UI. While using the Breeze interface, the narrow notification bar is located at the bottom of the screen instead of the top, making it get in the way of other common gestures. The main home screen displays the date/time, missed calls/message notifications, and the weather. In order to unlock the device, you must drag the curled up corner of the screen. The secondary home screen contains a carousel of recently used apps, webpages, etc. Opening up the main tray provides access to the catalogue of apps in horizontally scrolling frames, which maintain the eight original designated main shortcuts at the top of the screen. I had difficulty adding shortcuts and folders to the main home screens, which is a common practice in the Android interface. Overall, this UI was slightly better than the Samsung TouchWiz UI, but still lacks the functionality and popularity of the HTC Sense interface.

The dial pad is nicely spaced out, and includes direct shortcuts for call logs, contacts, and favourites. The smart dial functionality attempts to predict who you are trying to call, and displays the country origin of unknown incoming calls. The contacts app provides integration with social media sites, while the Social Jogger app allows for instant toggling between Facebook and Twitter feeds, posts, photos, and updates using a large scroll wheel. The default keyboard is the Android virtual QWERTY keyboard, which can be used in either portrait or landscape modes. This keyboard is very easy to use and provides a means of quick and accurate input on this touchscreen device. The email and messaging applications are well structured and organized with added support and features for Gmail and Talk. The Liquid Metal also comes preloaded with other useful apps such as MobileBack, nemoPlayer, Facebook, Twitter, Documents, RoadSync, Navigation, Latitude, Places, Spinlets, Talk, Java ME, and Barcode Scanner.

CONCLUSION:
The Acer Liquid Metal is a solid and durable device that gives off a sleek and expensive impression. The touch screen is adequately sized and very responsive, while also displaying clear and sharp images. The social media integration and apps performed well and became handy when toggling between phone calls, text messaging, and browsing the web. I was also impressed with the Dolby Mobile sound quality, although some deficiencies became apparent in the internal and external speaker volume during phone calls. This device could have benefitted from a faster processor and the inclusion of only one user interface. Although the Acer Breeze UI offered some variety, I doubt it will gain popularity over the standard Android UI. One of my favourite features on my trusted Blackberry is the LED notification light, which I hope will become the norm among all smartphone manufacturers. It was pleasant to see Acer incorporate this technology into their chrome platting and I hope to see this adopted in other devices moving forward. The device is very affordable for any consumer willing to commit to a 3-year agreement, while all other prices seem unreasonable. Overall, the Liquid Metal is an affordable and durable smartphone, which will be able to attract beginner users looking to make the jump to an Android Smartphone.

Apple macOS to be optimized for VR Software, will integrate with Valve, Unity and Unreal Engines