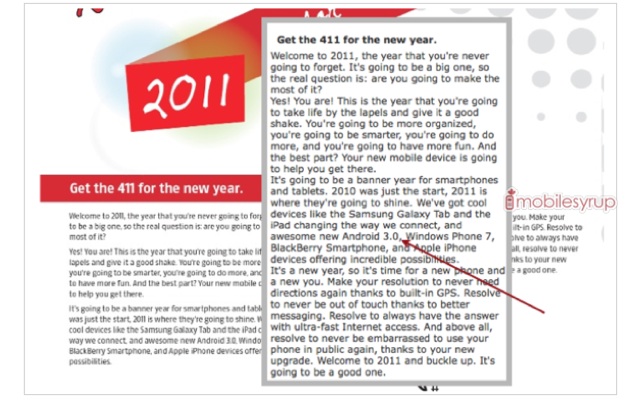 The Future Shop “Cell Shop” magazine highlights certain devices each month and in their January issue they have a short intro to 2011 titled “Get the 411 for the new year”. It gives a quick outline of what they expect this year to be like. Specifically a caption in the post reads “It’s going to be a banner year for smartphones and tablets. 2010 was just the start, 2011 is where they’re going to shine. We’ve got cool devices like the Samsung Galaxy Tab and the iPad changing the way we connect, and awesome new Android 3.0, Windows Phone 7, BlackBerry Smartphone, and Apple iPhone devices offering incredible possibilities.”

It’s almost expected that we’ll eventually see a device with Android OS 3.0 “Honeycomb” in Canada, but nothing has been confirmed. This new OS is “Built entirely for Tablet” and this could mean that we’ll see the new Motorola Xoom launched here. However there are other tablet devices that are 3.0 compatible: Toshiba Honeycomb tablet (yet to be named), Asus Eee Pad Transformer, Asus Eee Pad Slider and the Asus Eee Pad MeMo… but hopefully it’s the Motorola Xoom that becomes available.