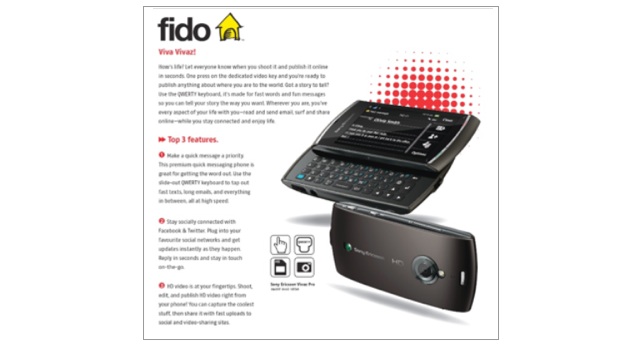 Looks like you’ll have a bit of choice of where to pick up the Sony Ericsson Vivaz Pro. This messaging device was released on Rogers and it’s also coming to Fido (should be available this week). The price points on Rogers ranges from a 3-year $49.99 to the no-contract price of $274.99. As for Fido this will come in at $75 on a 2-year contract and $275 outright.

We’ll have a review up shortly but probably the best feature of the Vivaz pro is that it has a 5.1 megapixel camera that can capture 720p HD videos. In addition, this 3.2 inch touchscreen has a slide-out QWERTY keyboard,WiFi and holds up to 32GB with a microSD card.