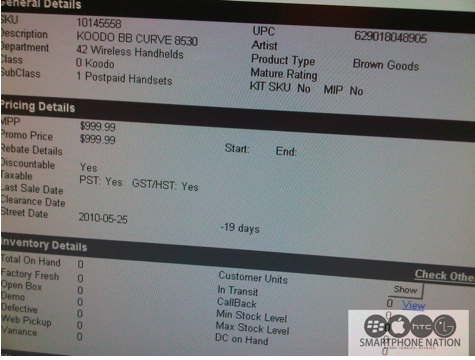 Koodo announced last week that the Curve 8530 will be launched sometime this Spring and “is expected to retail for $300, or $150 for new customers who put the smartphone on their Tab”.

We also let you know that from the internal screenshots we received that new EPP plans go into effect May 25th. In addition, Koodo is also rumoured to be adding a couple data add ons: $10 for Unlimited Social Networking and the second will be $25 for 500mb data. A new inventory screenshot has surfaced that shows the Koodo Curve hitting the streets with a date of May 25th. Not sure if they will see lineups but he Curve 8530 is a solid entry level Smartphone… will you be getting it?