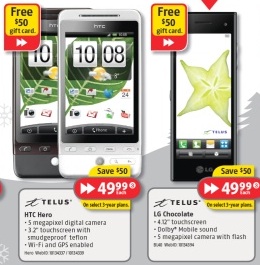 The deals are coming out now with 2 weeks until December 25th. Future Shop has probably the best deal going by selling the TELUS HTC Hero and LG Chocolate for $49.99 on a 3-year contract. If that’s not good enough for you… they are throwing in a $50 Gift Card also. The sale is on until December 17th, 2009.

FYI: TELUS is still selling these both for $99.99 on a 3-year at their locations. Might be worth checking out!