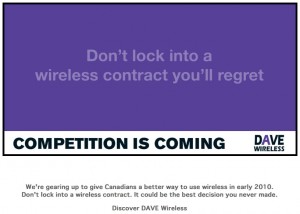 With Bell, Rogers and TELUS slapping lawsuits against each other on what seems to be a weekly basis, wireless in Canada is getting more popular and competition is getting more ruthless everyday. One can only dream of what the wireless will look like when the Globalive saga is over and all the other new carriers such as Dave Wireless and Public Mobile officially enter the market.

Speaking of Dave Wireless… they’ve done a minor update to their website that has a very bold statement attached to it. They state “COMPETITION IS COMING” with quick one liners:
“No Action = the best course of action”
“Don’t lock into a wireless contract you’ll regret”
“Like contract? Go to law school”

Similar to the other is sounds like they will be offering us Canadians a wireless plan with no contract to sign. Definitely a step in the right direction. In addition, they also say “We’re gearing up to give Canadians a better way to use wireless in early 2010. Don’t lock into a wireless contract. It could be the best decision you never made. Discover DAVE Wireless.”

We’ve had several conversations with the folks over at Dave Wireless about their plans to launch their network. Their name will be changing and you’ll see them initially available in the following cities: Toronto, Vancouver, Calgary, Edmonton and Ottawa.

KPMG: 15% of Canadians have done banking through a mobile device