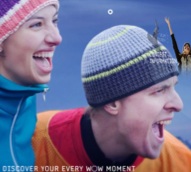 Samsung has launched on online contest called the “Samsung Mobile Explorers”, this is in conjunction with them being the “Official Worldwide Olympic Partner in Wireless Communications Equipment” of the Vancouver 2010 Olympic Winter Games.

To enter all you have to do is visit www.samsung.com/vancouver2010 and complete the form and upload a video (by December 6, 2009) that demonstrates your ability “seek-out and generate buzz”; your experience with online media; your social networking interests and your communication skills. If you win, you’ll get an economy-class airfare for 2 to Vancouver, 20-nights of accommodation, 3 meals per day and a two Samsung Omnia II mobile phones.

Benjamin Lee, President and CEO, Samsung Electronics Canada said “This once-in-a-lifetime experience will put our Samsung Mobile Explorer teams front-and-center on the world’s biggest stage. This prize will allow the eventual winners to use Samsung mobile technology, including the Samsung Omnia II Olympic hero phone, to interact and share their personal WOW moments.”