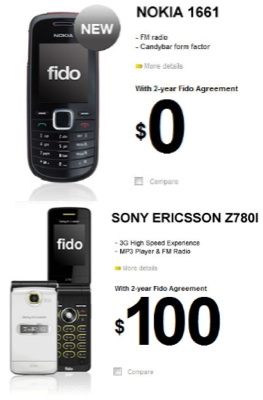 It looks like from these images that Fido is set to release the Nokia 1661 and the Sony Ericsson Z780i.

The Nokia 1661 will be $0.00 on a 2-year contract a comes with an FM radio, Mp3 player, 1.8 inch screen with a resolution of 128 x 160 pixels, flashlight speakerphone, plus the usual phone features such as contacts, Calendar, stopwatch, Calculator, speaking alarm clock and games. Speak Out Wireless and Petro-Canada even beat Fido to release this as they launched theirs a couple months ago (currently available with a no-contract price $59).

The Sony Ericsson Z780i has had a tough go so far in Canada. It was targeted for release last year but for some reason was “officially cut” from the line-up for no reason. However, it now seems to be headed to Fido for a whopping $100 on a 2-year contract. This will make it the most expensive device apart from the iPhone. This flip phone will have a 3G High Speed “Experience”, MP3 Player, FM Radio, can hold up 8GB with an M2 Memory card, Internal Screen size of 2.2-inch with a resolution of 240 x 320 pixels (External screen is 36 x 128 pixels).