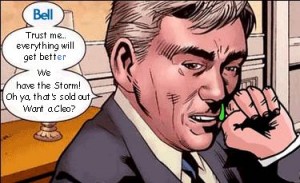 When the Bell $52 billion failed takeover bid was terminated, Bell announced that they are a “re-energized company with a clear goal – to be recognized by customers as Canada’s leading communications company – and the customer-focused strategy and structure required to achieve it.”

Today, Bell announced that they are offering a “retirement incentives” to approximately 1,500 unionized employees “who meet certain criteria and are already eligible to retire in 2009 and 2010”.

George Cope, President and CEO of BCE said “This initiative supports Bell’s strategic imperative to achieve a competitive cost structure, it also thanks many of Bell’s longest-serving team members for their service by allowing them to take a financially secure retirement even earlier than they may have planned.”