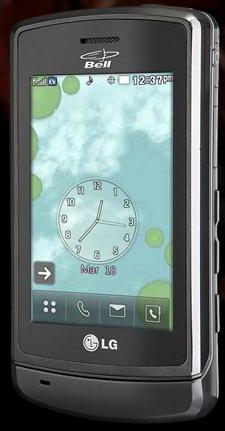 The LG Vantage is another Touch screen devise and has a slide keypad. It comes loaded with a 2 megapixel camera that can also shoot videos. Bluetooth enabled with EVDO connectivity to stream movies, videos and music. The LG Vantage is only 15mm thick. The screen itself is 2.8 inches.

No word on price plans or official release date with Bell.

“We know that Canadians have a taste for the best, which is why we are so excited to bring the Touch series to Canada,” said Andrew Barrett, Vice-President, Marketing, LG Electronics Canada. “Canadians have never had access to phones like this before and we love that we are able to put a previously-forbidden object of desire into their hands in a few weeks. And as we see from the survey results we’re releasing today, Canadians are attracted to the untouchable.”