Industry Canada has released some very interesting statistics regards the current state of the wireless communications market in Canada.

“More Canadians own cellphones, use them more intensely and for varied purposes, and are even starting to rely on cellphone service alone for their telephone needs. Cellphones have become ubiquitous in today’s society and are now an important part of most of Canadians’ telecommunications activities. At the end of the first quarter of 2006, there were 16.8 million wireless subscribers in Canada, implying a strong and sustained year-over-year growth rate of 11.9%. 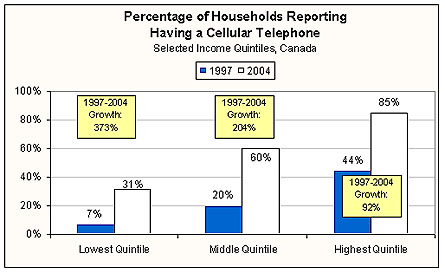 On a global scale, however, Canada’s rate of adoption of wireless telecommunications is lagging, with just under 52 subscribers per 100 inhabitants at the end of the first quarter of 2006, a level reached by the United States in the second half of 2003 (Statistics Canada 2006).

Notwithstanding this international perspective, the rate of Canadians’ adoption of cellphones is growing. In a 2006 survey, among those households which owned or had access to a wireless phone, 57% reported actually having access to two or more wireless phones, up from 25% in 1997 (Decima Research 2006)