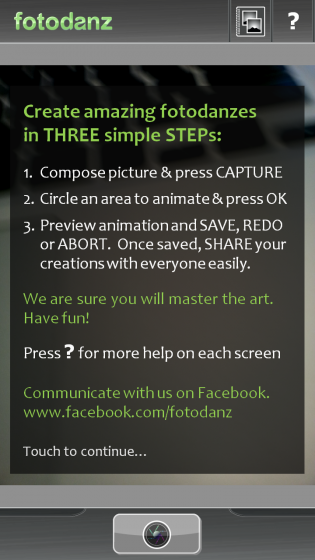 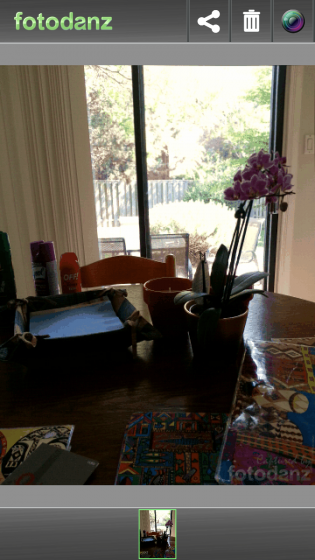 It’s one thing to say that a photo is alive; it’s another thing to build a tool to actually make it so. While the burgeoning cinemagraph market is booming on iOS, with apps such as Flixel and Cinemagram vying for the iPhone camera crown, until recently there were no options for Android users to do the same.

fotodanz is similar to Flixel in a number of ways, but manages to keep things simple; there are no social elements, no “liking” or streaming. The app captures three seconds of video — no more, no less — and allows you to draw a circle around the area you’d like to animate. This is far more limiting than Flixel, which allows you to “paint” as many areas of the living photo you’d like. But, again, photodanz is all about simplicity. The app boasts built-in image stabilization and compression (with a 70% reduction in size without quality loss).

Once the f0todanz is created, you can share it via email, or upload the saved .gif file to any number of social networks. You also have the option of adding a number of filters to make the foto warmer, cooler or black & white. The latest release, creator Ravi Gananathan assures me, is much more stable than the first one, with considerably better photo quality.

His goal is to make the app work across the entire Android ecosystem regardless of hardware capabilities. He says that more modern devices like the Galaxy S II will have superlative photo quality — the app is ultimately limited by the phone’s camera quality — but his goal is to get a top-notch experience across many devices. Compared to the first release, which lacked dithering, the new build looks fantastic and performs much better.

Gananathan says the next release, which is expected in a few weeks, will address some lingering performance issues with the new build — it currently takes between 10 and 15 seconds to render a foto on my Galaxy S III — and bring even more filters and animations. We look forward to trying it and will keep you up to date of this promising app!

ViewBug wants to improve your photography, then reward you for it [App of the Week]