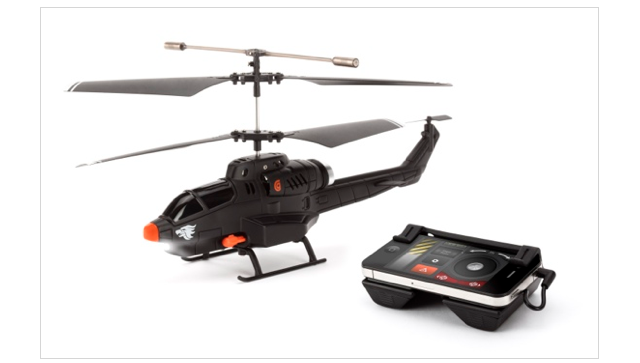 Griffin, usually associated with iPhone accessories, is releasing its HELO TC Assault copter today. The toy, which retails for $59.99, is controllable via an iOS or Android app.

The included Flight Deck add-on plugs into the headphone jack of your iPhone or Android device, allowing you to more easily grip onto the unit with both hands. You can control the copter by tilting the phone, or manually with touchscreen controls.

The best part comes with the ability to shoot reloadable assault missiles from either side of the copter. According to Griffin, the copter is a twin-rotor design and is made of high-impact plastic with a one-piece fuselage. Six AAA batteries fly the copter for around 10 minutes, which is slightly disappointing.

Overall it seems like tons of fun, and can be shipped to Canada for under $75. Check it out over at Griffin, and download the apps from iTunes or Google Play. There is a humorous demo video after the break.