Nintendo could be working on a SNES Switch controller 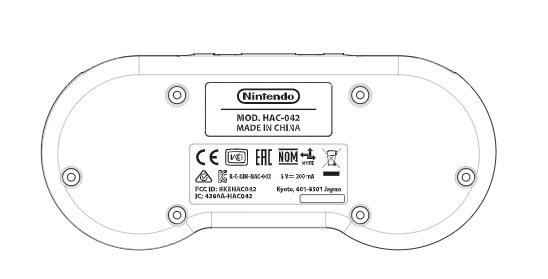 Nintendo could be working on a SNES-like wireless controller for the Switch, according to a recent FCC filing first uncovered by a Resetera forum user.

Not much is known about the controller yet other than the fact that it seems to resemble a classic SNES gamepad and that it’s capable of connecting to the console via Bluetooth. There’s also the above image of the rear of the controller in the FCC filing’s ‘label location’ section.

Last year Nintendo released retro NES controllers for the Switch along with the launch of several classic NES titles, including Balloon Fight, Super Mario Bros. 3 and The Legend of Zelda, as well as its Nintendo Switch Online platform.

It’s possible that given Nintendo might have plans to release a SNES controller for the console, the Japanese gaming giant is dropping Super Nintendo games for the Switch. Considering how expansive the Wii and Wii U’s Virtual Console library grew to be, SNES game’s hitting the Switch is long overdue.

Here’s hoping we’ll all be able to play The Legend of Zelda: A Link to the Past with an official Nintendo-made SNES controller in the near future. In the meantime, third-party video game accessory maker 8Bitdo sells a number of SNES-inspired gamepads that are compatible with the Switch.

Source: FCC, Resetera Via: The Verge