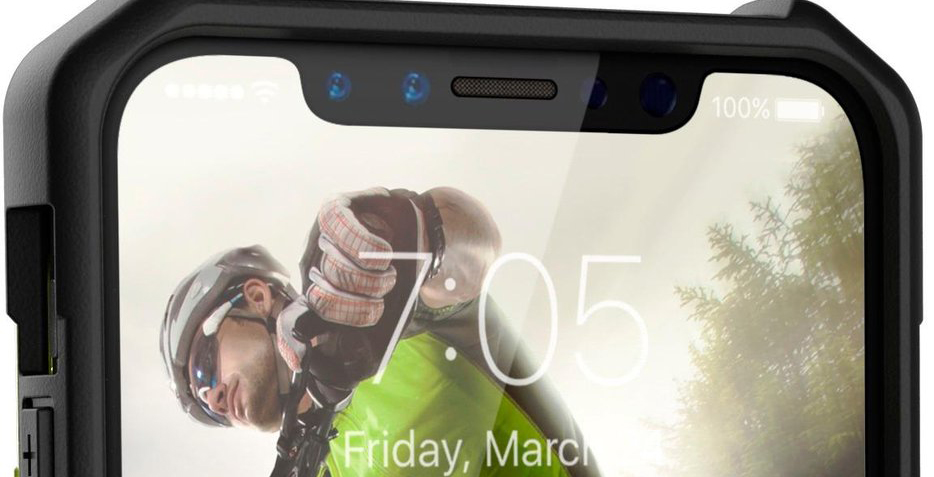 The battle of the smartphone bezels is about to get more interesting.

While it’s been rumoured for some time now that the still unannounced iPhone 8 will feature a Samsung Galaxy S8-like ‘bezel-less’ design, the latest leak surrounding the smartphone is our best look at this substantial aesthetic shift yet.

The new image, originally posted by reliable leaker Evan Blass, shows off what the screen-dominated front of the iPhone 8 will likely look like. As predicted, the phone features a cut out at the top for its earpiece, various sensors and front-facing camera, and below sits its large, almost completely bezel-absent display.

It’s worth noting that the rather large and chunky looking ‘Urban Armor Gear’ case surrounding the next iPhone is dated from March, which could indicate this isn’t Apple’s final design of its next iPhone. However, Bloomberg’s Mark Gurman, another reliable source of Apple related leaks, has stated that this render is “a good look at the notch” featured at the top of the next iPhone.

The image also confirms that the iPhone’s iconic Touch ID fingerprint sensor will likely not be present in the iPhone 8, likely indicating earlier rumours that Apple is opting for facial recognition instead, are accurate.

A good look at the notch from @evleaks https://t.co/Xs1UhEu0th

If this image of the next iPhone is legitimate, it looks like this fall is set to be a battle of bezels, with Samsung’s Note 8 and the Essential Phone opting for similar designs, while recent Pixel 2 rumours indicate Google’s next phone will still feature a substantial ‘chin’ and ‘forehead.’

Last week information leaked about the iPhone 8 courtesy of an accidentally released Home Pod developer software build that share code with the next version of Apple’s iPhone.