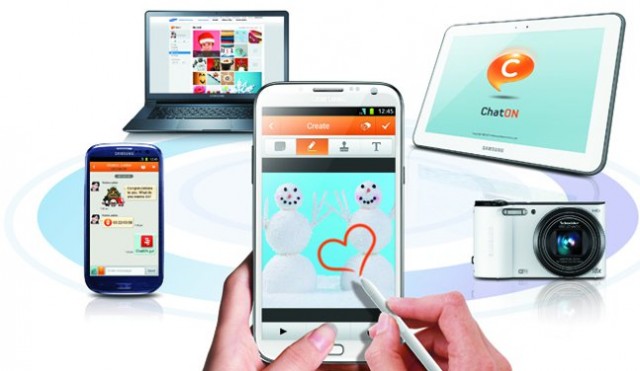 Samsung’s ChatON may not be as ubiquitous as the company would like, but they’re certainly not slowing down on the innovation.

A recent update to version 2.0 for Android brought multiple device syncing, so logging into your account on your tablet, Android phone, Galaxy Camera, or the web, will result in conversations being updated in real time on up to five devices. The iOS and Windows Phone clients will also be updated in the coming weeks.

ChatON 2.0 also brings something called Trunk, where users can store photos, videos and documents for a group to see before sharing them to the wider web. Samsung called the service a mini social network, as users now have profiles on which they can leave status updates as part of a wider stream. While I think this feature is largely superfluous, and goes against Samsung’s initial vision of an instant peer-to-peer or peer-to-group messaging service, we’ll have to see if it takes off.

Tablet users have also benefited from a new release of ChatON, though it doesn’t yet have feature parity with its smartphone counterpart. Users can initiate voice calls through a push-to-talk (PTT) service and the app has received an interface spit-shine.

Samsung is attempting to differentiate its instant messaging offering in a highly-saturated market. Apps like WhatsApp and Kik dominate in North America, while Line and Kakao have taken Asia by storm. Indeed, ChatON isn’t even the most widely-used chat service in its home country. But its preload approach ensures that ChatON is installed on all Samsung smart devices and, based on expectations, there are going to be a lot of them sold in the next year.