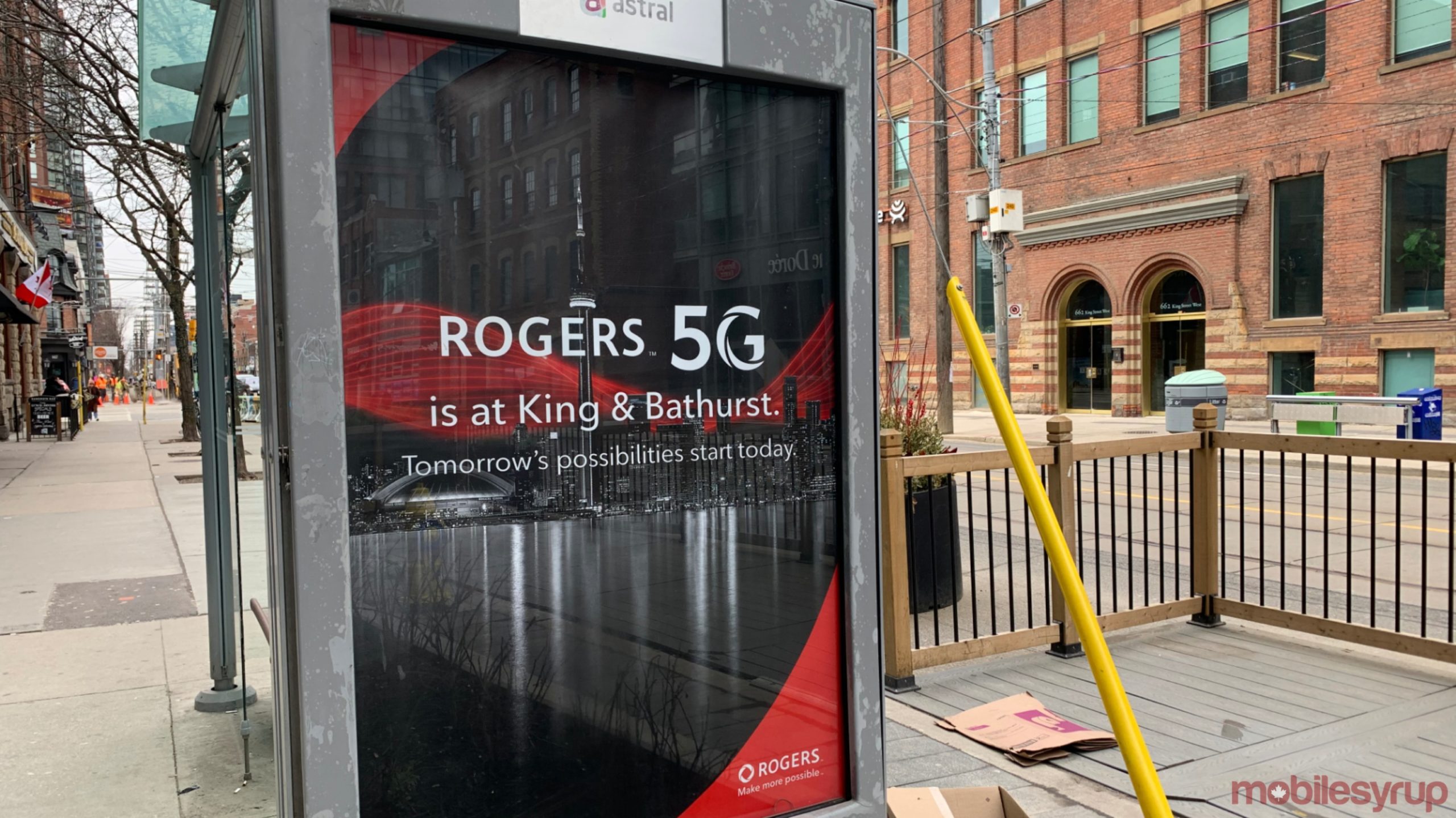 The national carrier claims that customers with a 5G smartphone will experience Rogers’ best speeds, comparable to its current top LTE speeds. Rogers says its 5G service — which it says has a $15 CAD value — is accessible at no extra charge until March 2021. The service is only available for customers who are on a Rogers Infinite Plan. 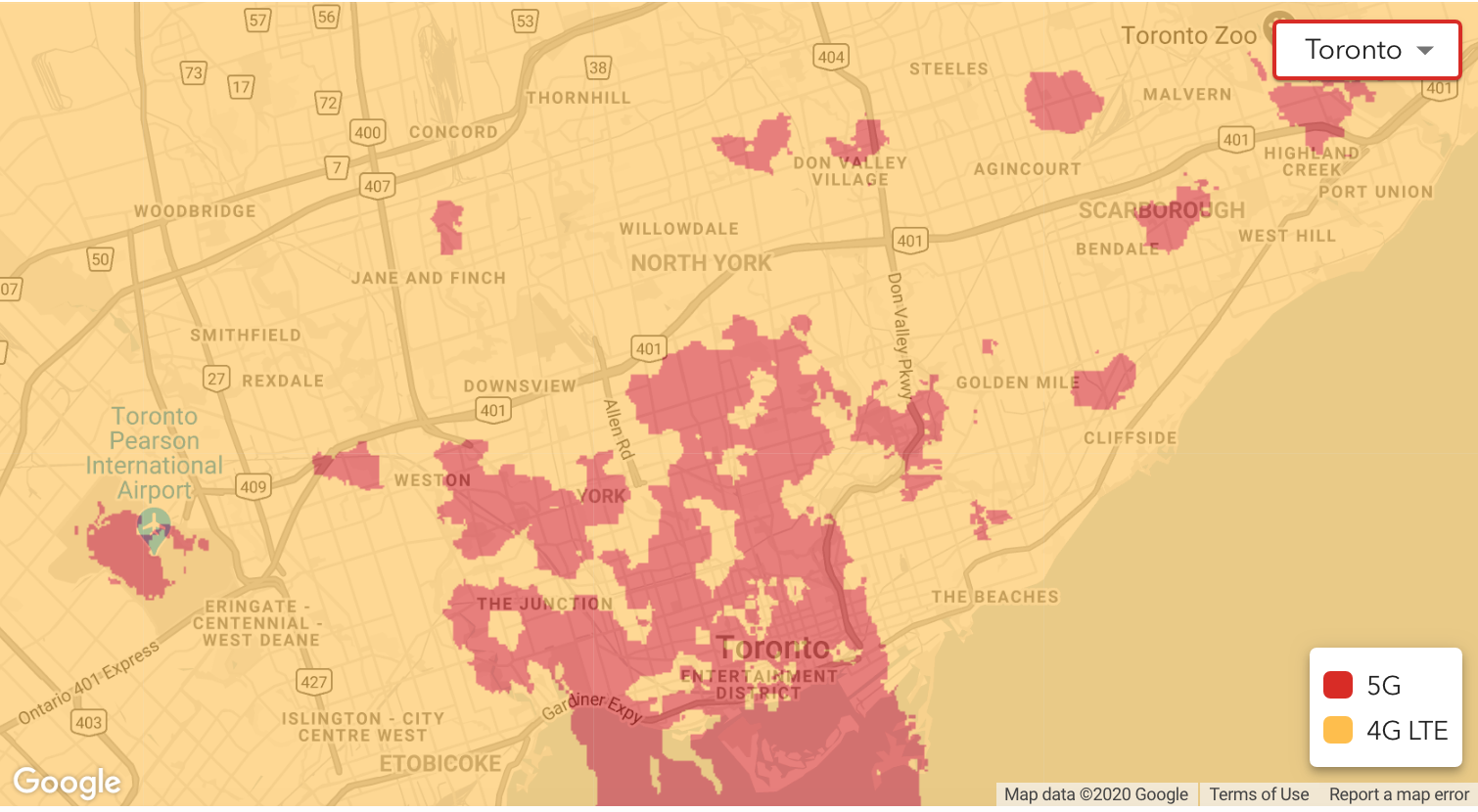 The carrier has also confirmed that the 5G service is accessible with all Samsung S20 series devices, including the S20, S20+ and the S20 Ultra.

Rogers has not disclosed specific information regarding network speed, but has released coverage maps that outline where 5G service is available.

The maps note that they are a general representation of wireless coverage and that the areas shown are approximate. It also outlines that the actual coverage area may vary from the map graphics.

Once the network started rolling out in January, Rogers’ CTO Jorge Fernandes told the Financial Post that the benefits of 5G won’t be immediate.

“Initially people won’t really see the difference from a consumer point of view. Keep in mind the first release of 5G will use a non-stand-alone core. Basically what this means is that 5G will still use the 4G core,” he told the Financial Post.

Rogers notes that 5G is going to evolve over time and that it will become more advanced once additional spectrum is available.

“5G is a transformational technology and will evolve over time. Today, Rogers Infinite customers with a 5G smartphone will experience our best speeds. As more 5G spectrum becomes available and network technology advances, Rogers 5G will continue to evolve and deliver increasingly faster speeds, ultra-low latency and increased capacity,” the carrier said in a recent statement sent to MobileSyrup. 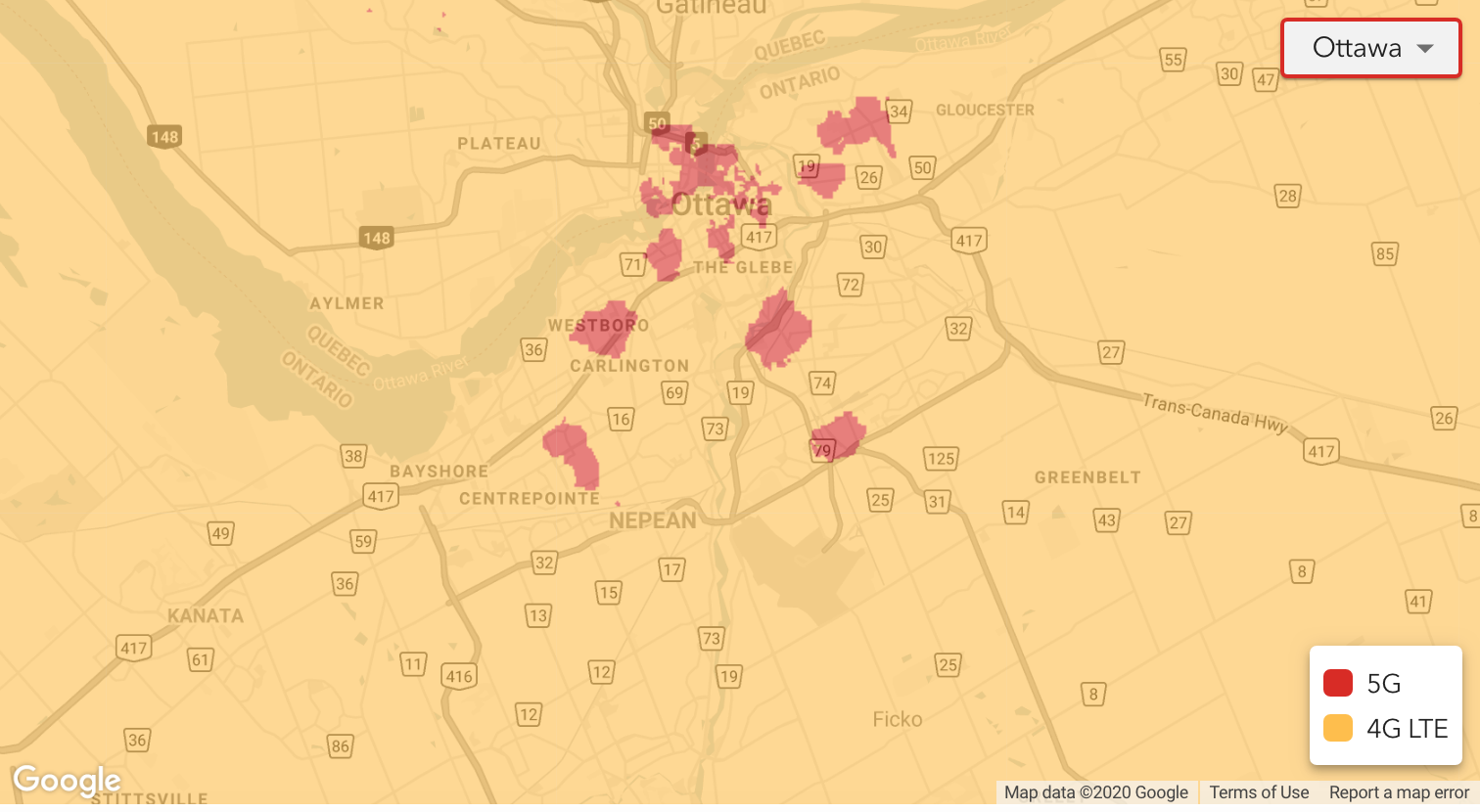 Further, prior to the launch of Rogers’ 5G network, Scotiabank’s telecom analyst Jeff Fan noted that “due to the advancement of the latest versions of 4G (LTE-Advanced with carrier aggregation), the first generation of 5G is expected to deliver end-user capacity/speed that will be ‘similar’ to the most updated 4G networks.”

Fan also noted that initial 5G launches in 2020 will likely be for marketing purposes and that the real enhancements in terms of 5G will come once 3.5GHz spectrum is deployed in 2021.

Rogers’ 5G network currently uses 2.5GHz spectrum in the downtown cores and later this year will utilize 600 MHz spectrum. The carrier says it will also deploy 3.5GHz spectrum and dynamic spectrum sharing, which allows 4G spectrum to be used for 5G.

The 3.5GHz spectrum has yet to be auctioned by the Canadian government. Innovation Minister Navdeep Bains recently announced that the auction would begin on December 15th.

This spectrum is considered one of the key spectrum bands for 5G technology, as it supports high speeds, increased data usage and new applications.

It’s important to note that Bell has said that it is ready to launch ‘early 5G service’ later this year. Telus also says it will begin rolling out its 5G network ‘shortly.’

As noted by Fan’s analysis, these initial launches likely aren’t going to provide changes for the average consumer as they won’t be using the 3.5GHz spectrum, which is considered essential for 5G networks.

The next generation of mobile wireless services is going to offer faster download and upload speeds, and also allow more devices to be connected to mobile internet at the same time. The 3.5GHz spectrum is going to allow for speeds that are 10 to 20 times faster than what we currently have. This means it would take a mere few seconds to download an HD movie.

For the average consumer, this means that mobile videos will play smoother, video calls will be clearer and files will download more quickly. From a broader perspective, 5G is also predicted to power smart cities through advanced IoT technology.

However, these advancements and benefits are still quite some time away, at least in Canada. We’ll likely start to see the full capabilities of commercially available 5G in 2021 and beyond once the 3.5GHz spectrum is auctioned and deployed by carriers.