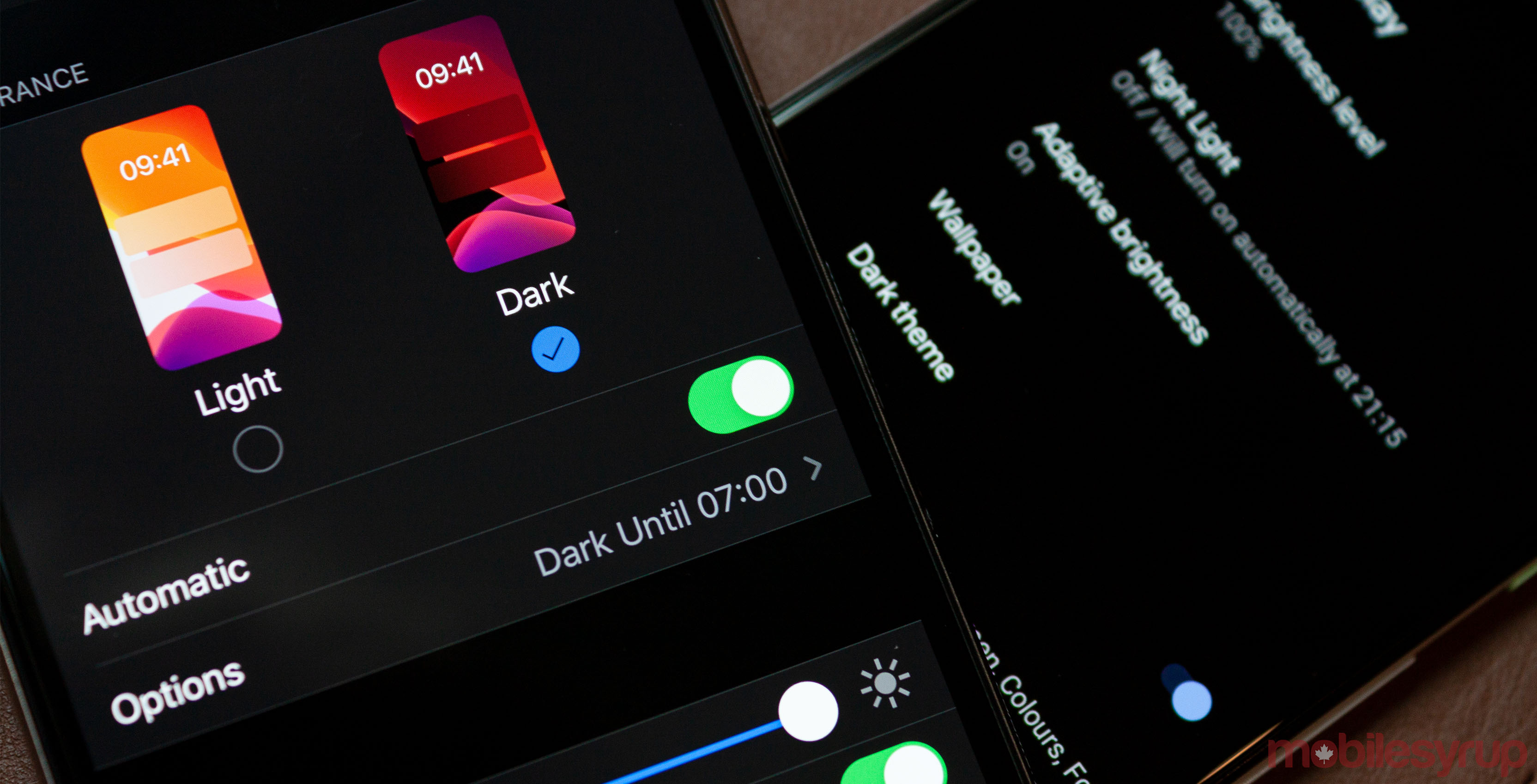 Twitter was three-years early when it introduced a dark mode to its app knowing it was a key feature users have wanted for a long time.

Now, other big technology companies are adding dark modes, including Apple and Google which have implemented dark modes at the OS-level in both iOS 13 and Android 10.

However, once smartphone users initiate dark mode, the system toggle won’t automatically turn on dark mode for all apps. For many apps, users will have to go in separately and turn on dark mode. This is something Twitter product manager Patrick Traughber said the social media giant has been working on. He added his team is trying to figure out ways to check whether users are in dark mode so they can update Twitter’s user interface in the app to offer a more consistent experience.

“We do plan to support automatic dark mode when we detect the device is in dark mode,” said Traughber during an interview with MobileSyrup.

“It’s not just a switch, though. This is where it’s challenging and one of the reasons why it’s taken us time to launch different theme colours.”

Traughber is part of the Client Foundation Team that makes changes to Twitter’s user interface and the performance of the app. 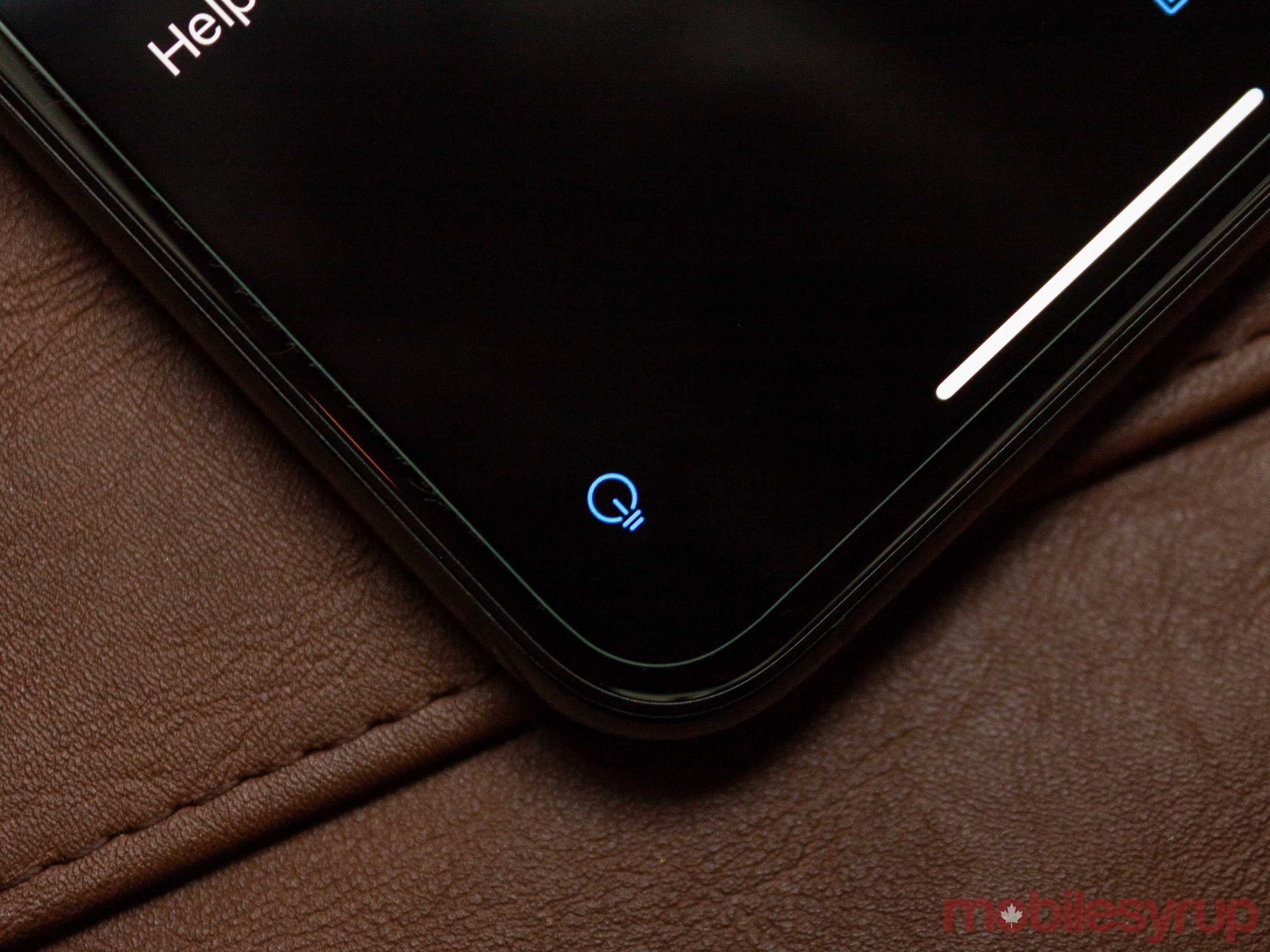 In 2016, when Twitter decided it wanted to create a dark version of its app, Traughber said he was the product manager for dark mode. At the time, he formed a team of engineers, designers, product managers and researchers all focused on working on the feature.

The team mainly tested and worked on all things dark mode-related, including what it would look like and what the user experience would eventually be.

“[In 2016] we tested Dark Mode with usability testing, and we also launched it via an experiment and measured the qualitative and quantitative feedback,” Traughber said. At the time, only one theme had launched. Now, there are two — ‘Dim Mode’ and ‘Lights Out,’ the latter of which is a completely black version of Twitter released to iOS devices back in March.

According to Traughber, more than a quarter of Twitter users use the platform in dark mode. Back in February, The Verge noted Twitter currently has 126 million users, which means that over 31.5 million currently have set their app to a dark theme.

“…We did see when we launched Lights Out, which is the true black version, we experienced [an] uptick that was much faster than the original dim mode, and that’s partly because people are more familiar with dark mode in general and wanted Lights Out,” he said. 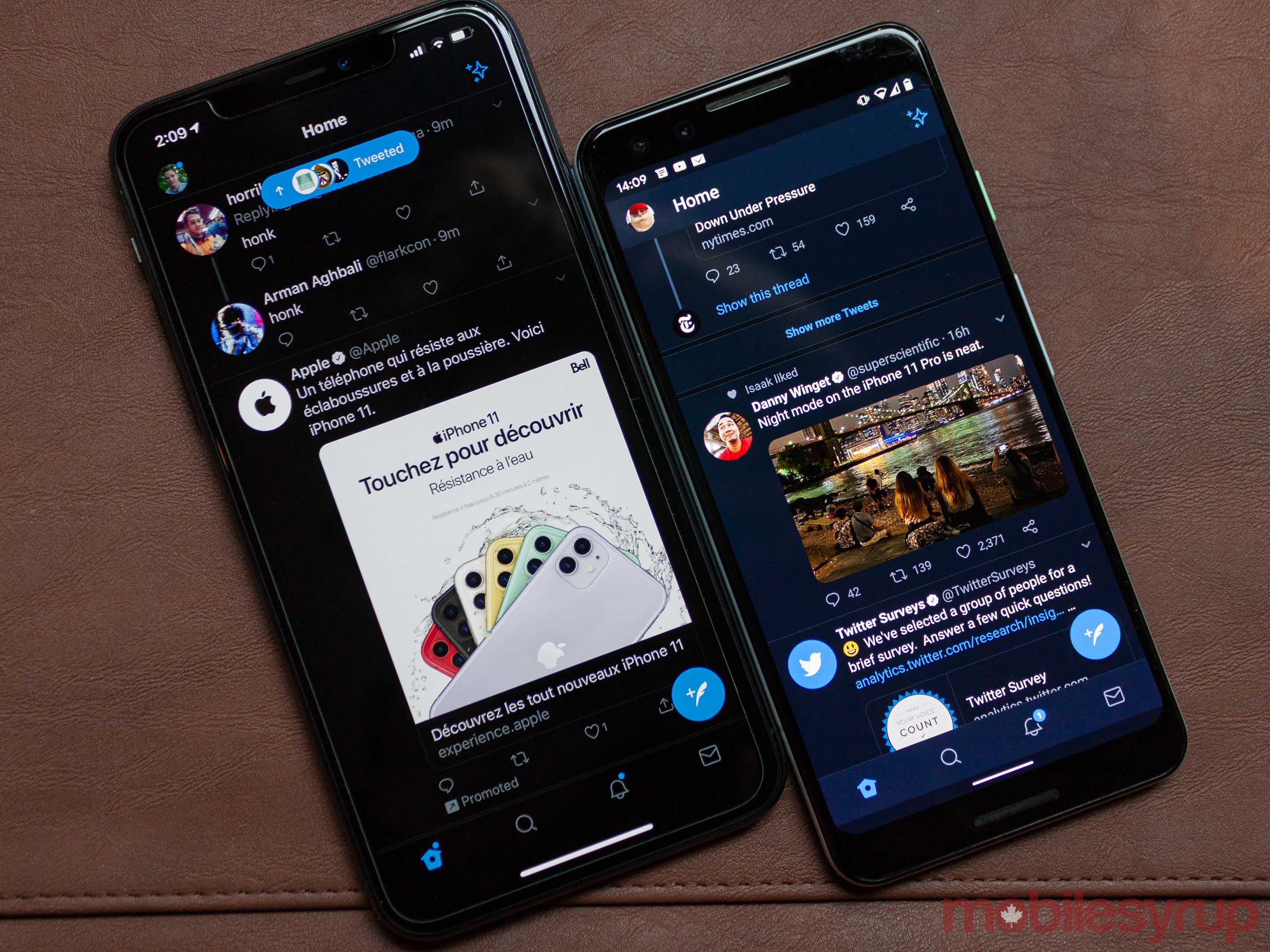 There are many reasons why you might want to start using your phone in dark mode. Firstly, it’s gorgeous. It’s also easier on the eyes and more comfortable to use in the dark.

But Traughber explains that it’s not just that users like the high contrast of light colours on a dark background.

Dark mode can also extend the battery life of your phone. Devices that utilize OLED screens, or display technology that turns pixels turn off when the background is dark, will benefit from improved battery life when using dark mode. Traughber also indicated that from an accessibility standpoint, the feature is critical.

“People with vision impairment liked [dark mode] because it’s easier for them to see text,” he said.

For the team, it took about a couple of months “of actual development work and to implement the first version of [dark mode],” Traughber said.

“But once we improved the architecture it’s much easier and faster to implement [other changes],” he said.

If you’ve used Android 10 or iOS 13 at all, you’ve likely noticed that not a lot of applications have implemented the dark theme yet. As Traughber said, it’s not a flip of the switch where it can be turned on automatically. Even apps that do have dark mode, like Twitter, may not sync with the system toggle.

Canadian software company Market Circle’s application Daylite felt its users needed to have dark mode available to them as soon as iOS 13 launched. 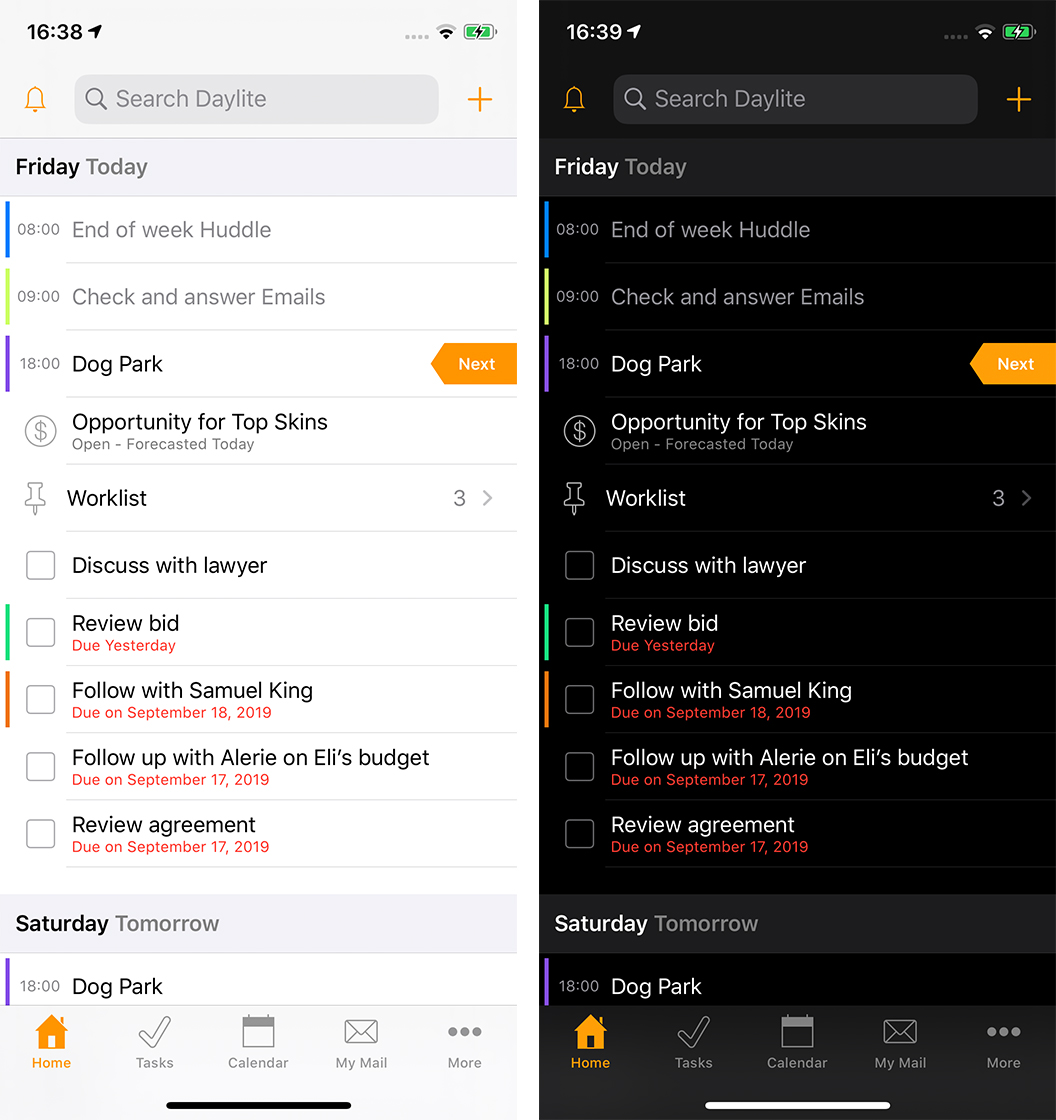 Its vice-president of software Mark Pavlidis said that it took about a month of work to fully implement the dark theme into the app.

The application is a CRM tool for macOS and iOS and is meant for small businesses that utilize the two platforms. It acts as a personal assistant for platforms unable to hire people, according to Pavlidis.

While macOS implemented dark mode with its Mojave update last year, Pavlidis said there were technical difficulties, and the company didn’t ship out a dark mode to users.

“That was a point of much criticism from our customers, and one of the examples was users were on a plane, and it felt like a flashlight,” he said during a phone interview.

“That was a clear signal that we needed to have it ready for day one for iOS, because [if you don’t have dark mode] it’s even worse when you use your phone in the dark.”

Pavlidis also said that the company wanted to ensure that customers were receiving what they paid for and getting up to speed with dark mode for iOS was part of that.

Smaller developers need to be up-to-date with upgrades

Pavlidis explained that sometimes apps that release on older versions of iOS aren’t updated each year with the operating system’s new code and features. For example, Apple launches new features and development tools for iOS every year at its World Wide Developers Conference (WWDC).

Smaller development teams may struggle to keep up with these new features and tools and choose not to modernize their apps every year. Pavlidis said that adding dark mode to a legacy app that hasn’t kept up with the lasted iOS changes would be significantly more challenging.

“That’s why we see a number of apps that have chosen not to [add dark mode] out of the gate,” Pavlidis said.

Similar to what Twitter’s Traughber stated, Pavlidis said that a lot of smaller developers also have custom modes for their apps. So if you’re going to try and change something from light mode to dark mode, it requires developers to go into each line of code to ensure everything would work when the app switched over to the dark theme.

“If you do a lot of custom work, or you haven’t upgraded, then there is work to be done there, and then it becomes an issue of how well you’ve composed your system, how well you’ve isolated things, the scope of how much it will take to do the upgrades,” Pavlidis said.

Talking to customers and users is essential, says Pavlidis and Traughber

Both Traughber and Pavlidis encouraged developers to pay attention to user feedback.

“We have a good relationship with our customers, so we encourage them to report [issues], and we have a great team. We continuously run the app, and we put out nightly builds internally so we can run the latest and greatest to find issues before sending it to the customers,” Pavlidis said.

Similarly, Traughber noted that Twitter paid attention to what users have been saying about dark mode.

“People really love dark mode and it might seem somewhat trivial as a product feature, but people really care about these things and the reason they say they like it are really good reasons,” he said.