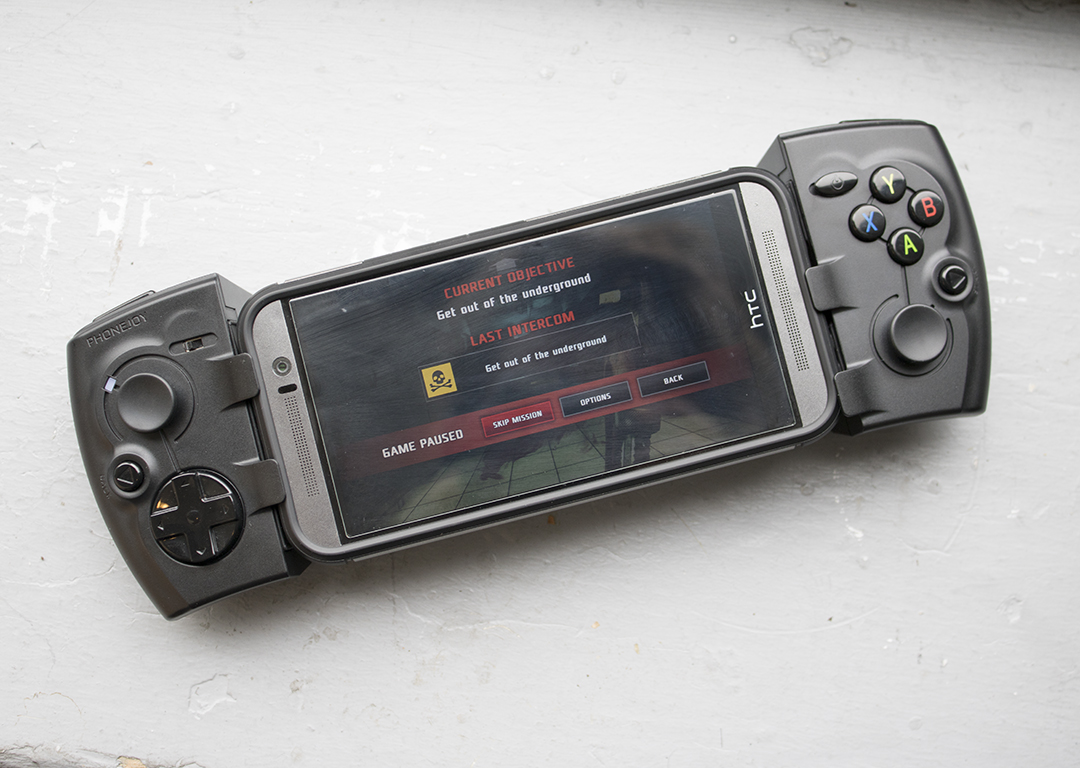 At the outset, the design of Phonejoy’s GamePad 2 seems like an inherently great concept for a mobile controller, especially for a product with a feature list this long.

The Gamepad 2 is compatible with devices running iOS (as long as it’s an iCade title, which isn’t exactly ideal), Android, and even Windows. It’s is also extremely portable and can easily be stashed away when on-the-go. And most importantly, it includes an innovative sizing feature allowing the gamepad to be compatible with almost any smartphone/tablet form factor (up to 155mm in width).

According to Phonejoy, the controller is even an upgrade over the company’s original gamepad in a variety of ways (I haven’t used the original Phonejoy Gamepad). Battery life is upped to 14 hours from eight, Bluetooth 3.0 support is added, and a variety of the Gamepad 2’s buttons are tweaked to be more concave and responsive compared to what was featured on the original version. 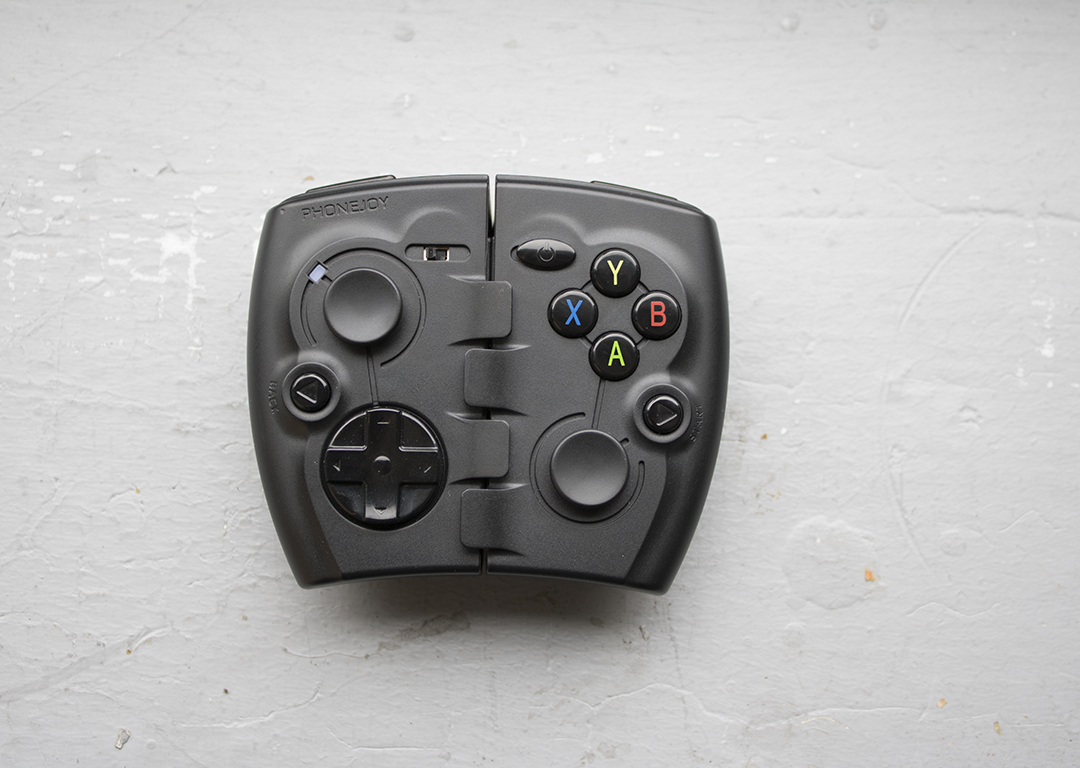 But unfortunately, what at first seems like an innovative concept is ruined by shoddy craftsmanship.

Phonejoy’s original Gamepad was funded through a 2013 Kickstarter campaign that raised almost $70,000, and finally, after years of waiting, the mass consumer version of the device is available. But does the controller live up to backer’s lofty expectations? Not really.

The Gamepad 2’s button layout will feel familiar to anyone who has used a modern game controller at some point in the last decade. It features two offset 3DS circle pad-like nubs, four shoulder buttons, a D-pad in the left corner, and X, A, B, Y buttons. 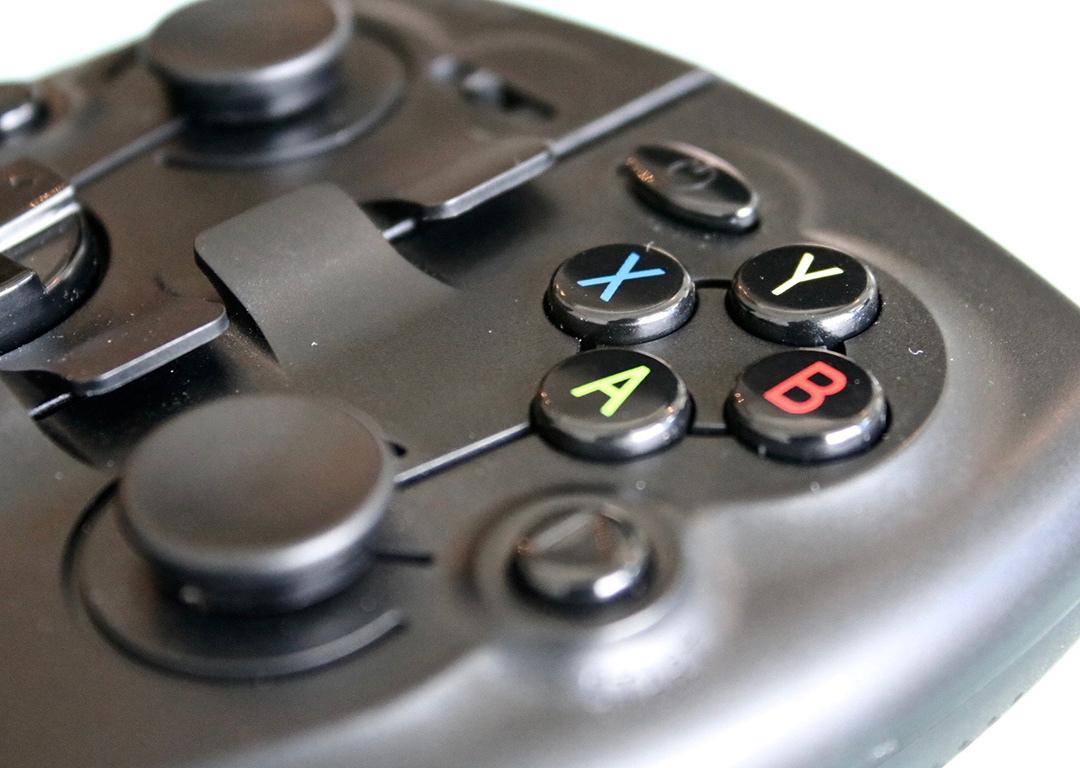 The gamepad’s awkward circle pads mean that the controller is simply ok for shooters, making it better suited for platforming titles, two genres that are notoriously difficult to play with touchscreen controls. Including full-fledged joysticks would have been a better option for Phonejoy with the Gamepad 2, allowing for more comfortable and accurate control.

Phonejoy’s Gamepad 2 also comes equipped with an internal cell that’s charged through a microUSB port, which is a welcome feature that negates the need for carrying extra batteries. Connecting the smartphone to an Android device is also very simple and unlike other Bluetooth gamepads I’ve used in the past, the Gamepad 2 is instantly recognized by my HTC One M9, as well as any other device I used it with.

Even the controller’s dedicated Android app does a great job of giving users a list of mobile games that are controller compatible, boasting approximately 200 different titles, such as Oddworld: Stranger’s Wrath, World of Tanks, Tomb Raider, and a variety of other games. 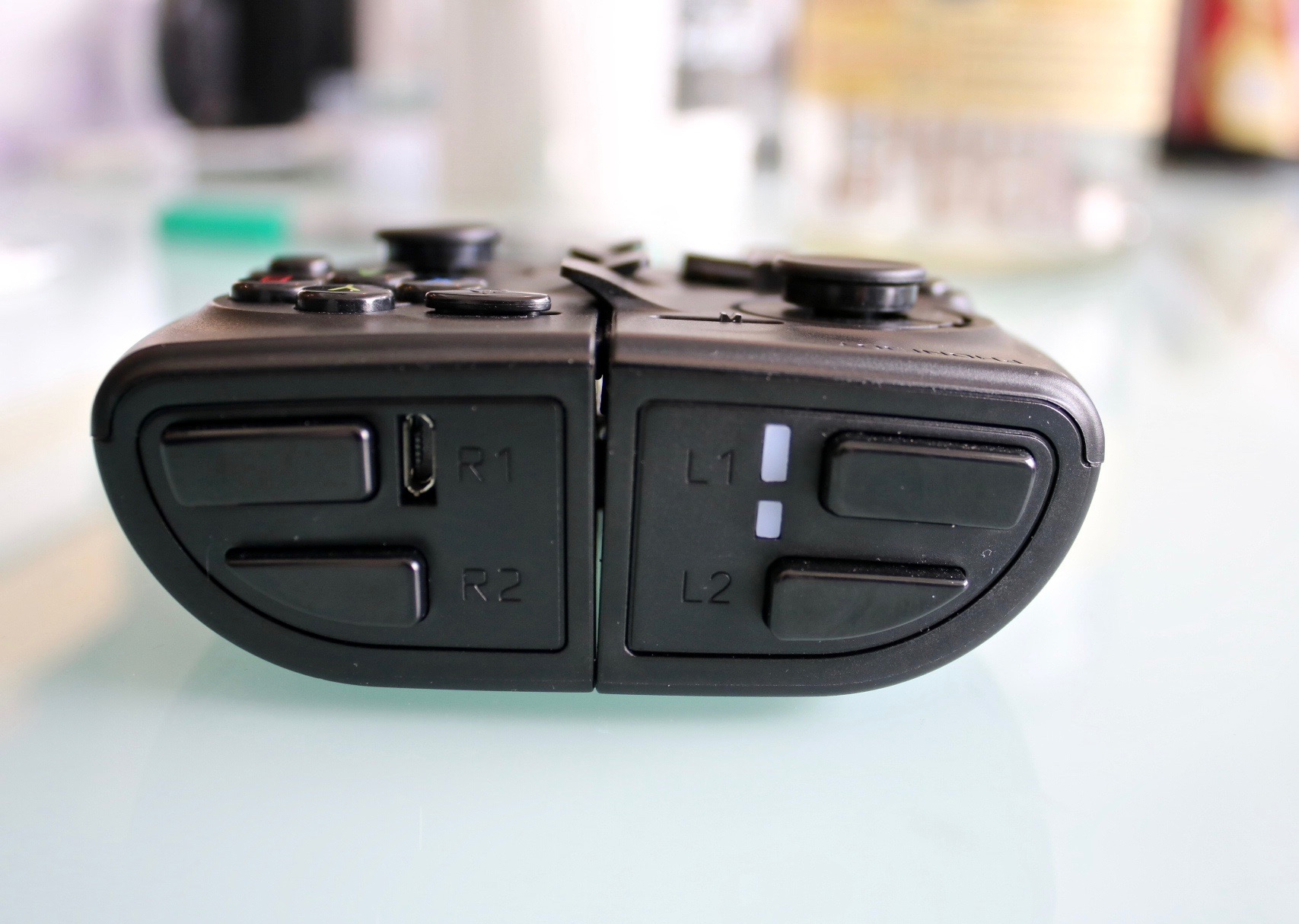 So far my thoughts about Phonejoy Gamepad 2 likely read as relatively positive, but here’s where the bad news comes in: the build quality of the Gamepad 2 is underwhelming, completely negating how innovative the gamepad’s expanding concept might seem at first glance.

The controller’s buttons feel cheap and have very little give to them, making each button difficult to press. The same can be said about the device’s circle pad and D-pad; neither feels solid and the circle pad doesn’t feel like it moves far enough. Strangely, the older Kickstarter edition of Phonejoy’s controller seems to include higher quality buttons and joystick when compared to this second iteration.

In short, the Phonejoy Gamepad 2’s nub joystick is reminiscent of something you might find on a knock-off PlayStation Portable from 2005, something loose and awkward to use. 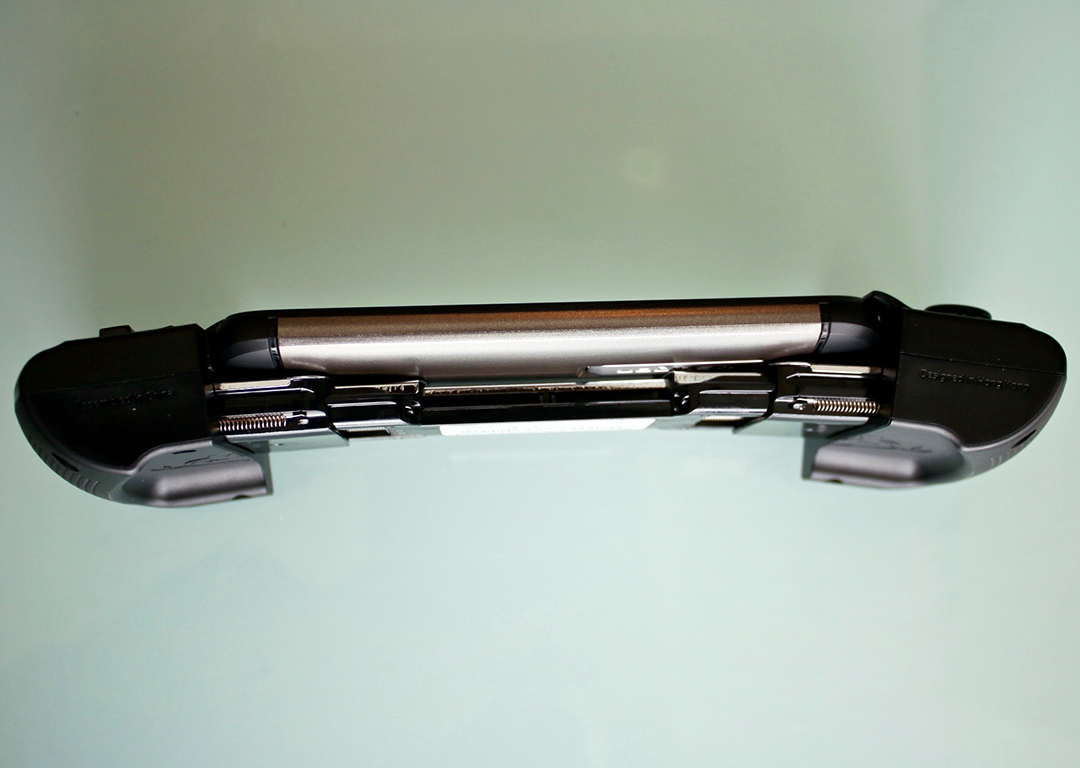 The above issues would be easier to swallow if the Gamepad 2’s expanding feature actually worked properly, but it doesn’t. The idea of Phonejoy’s controller working with almost any smartphone, including smaller tablets, is truly exciting, and it’s a shame the company opted to build its controller out of cheap materials.

In theory, all someone needs to do is expand the controller to the correct size, and slide their smartphone in between both sides of the gamepad, placing it directly in the middle of the gamepad. Unfortunately, regardless of what size the smartphone is, the Gamepad 2 awkwardly bends inwards at the back, making it uncomfortable to use under any circumstances

What that leaves is a product whose core functionality is fundamentally undermined by its choice of build materials. 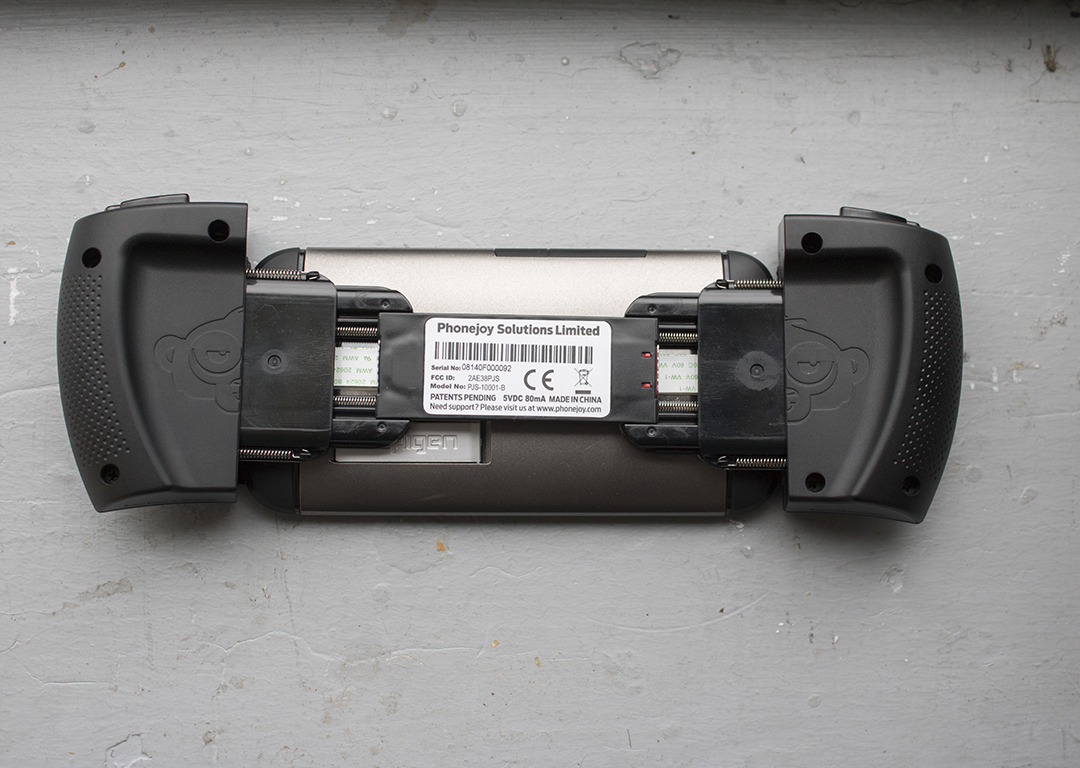 If you’re looking for a universal controller, there are a variety of other options out there. For example, the NES30 Pro (which I actually reviewed a few months ago), or the pricier MOGA Power Pro and MOGA Ace (which works very similar to the Gamepad 2) offer a higher-quality gaming experience at a similar price point. Even connecting a Xbox 360 or WiiMote is a significantly better option than using Phonejoy’s Gamepad 2 (I explain how to do this in this story).

As a side note, the fact that Phonejoy charges an additional $10 and $20 for two different premium versions of its gamepad, one including a 3.5mm audio jack and microUSB power adapter, and the other the same items with a stand, is also frustrating. Since the controller blocks both of these ports on almost all smartphones, these accessories should be built directly into Phonejoy’s Gamepad 2.

At US$89 (plus $14 shipping to Canada) there are significantly better mobile controllers out there.