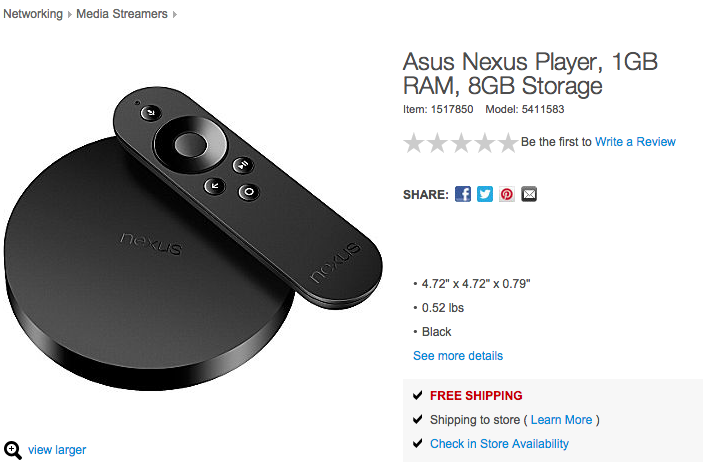 Announced in mid-October, the Nexus Player made its first appearance outside the Google Play Store this morning when it became available at multiple retailers in the United States, including Best Buy, Amazon, Walmart, and TigerDirect. Now it looks like the media player will soon expand to brick and mortar retail chains in Canada.

Though Best Buy, Walmart, and TigerDirect show no signs of the device in their online stores, Staples.ca does have a Nexus Player listing with a price that is just a smidgen higher than what Google is charging over on the Play Store. The key difference is that the Nexus Player is apparently sold out at Staples but ships within 1-2 business days from Google. There’s no sign of the Nexus Player Gamepad, so you’ll have to swing by the Play Store if you want one of those, too.

The Nexus Player is first Android TV device and is essentially a set-top box that allows you to run Google apps and services on your TV. You can also use it to Cast content from the likes of Netflix and YouTube to your television. It went up for pre-order in Canada in October and launched a few weeks later.