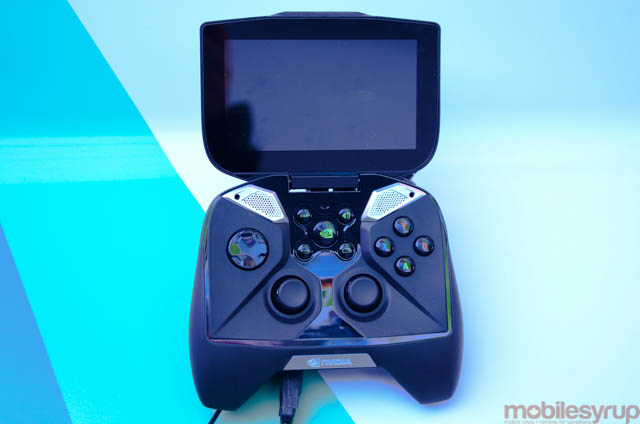 Nvidia’s Shield promises to be the best Android gaming thing when it debuts on July 31st for $299.

After being delayed nearly a month due to an unspecified mechanical problem, Nvidia has hit the launch button on the Tegra 4-sporting gaming device, which features full access to Google’s Play Store (running stock Android 4.1.2, natch) and Nvidia’s own TegraZone portal.

Having been considerably tweaked and trimmed since its introduction earlier this year, Nvidia Shield, which was initially known as Project Shield, sports a 72-core Tegra 4 graphics chip along with a 1.5Ghz quad-core ARM Cortex-A15 CPU package, 2GB of RAM, 16GB internal storage, a 5-inch 1280×720 clamshell display that folds down over the dual analog stick controls and forward-facing stereo speakers. In other words, this is the PS Vita of the Android world and should be a very interesting experiment in the viability of such a product. Android gaming has improved immensely in the last year, both in availability of quality games and the quality of the games themselves.

Nvidia promises to work with developers to optimize the controls and graphics specifically for the Shield, and the device comes preloaded with a number of titles from top-notch developers.

We got our hands on a late-stage prototype at Google I/O and were disappointed only in the viewing angles of the display — everything else was quite impressive. Nvidia has also played down one of the cooler experimental aspects of Shield, its ability to wireless “stream” full-quality PC games running from a Kepler GPU.

The Shield will be available at select Canada Computers and GameStop locations, along with Newegg.com, for $299 CDN when it debuts on July 31st. Pre-orderers also get a limited edition t-shirt at the moment.

Nvidia to buy Arm from SoftBank for $40 billion USD