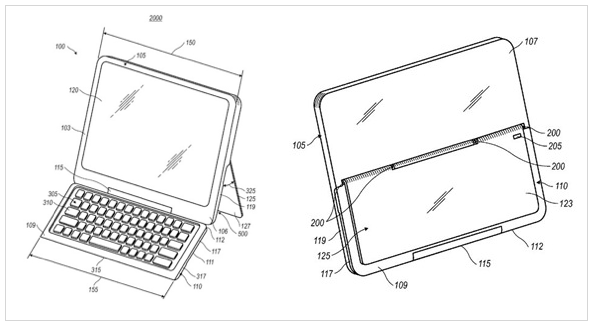 RIM entered the tablet space with mild success. Many felt that the BlackBerry PlayBook was rushed to market and failed to launch with needed features, such as a native contacts, calendar, and mail apps. All versions have been price dropped many time and once can now score the tablet for a low $150 outright. Their 4G LTE version was launched in Canada last month and will be heading towards other countries soon, but there might be something new brewing.

According to a patent filing with the United States Trademark and Patent Office, RIM is thinking about a “Mobile device with a concealed keyboard.” Clearly just a concept idea and nowhere close to launching. It’s similar to what Microsoft is launching with their new Surface tablet and the description states that the tablet will house a rotating keyboard that is embedded into its design. Here’s the official description:

Really, the only thing different that I can see from the RIM’s BlackBerry Bluetooth Keyboard and Case accessory is that it’s fixed and rotates. However, if they are granted the patent application it might help them win some patent infringement cases.

Check it out here from USPTO
Via: N4BB