Video: EnStream’s NFC app in action, will be available “early next year” 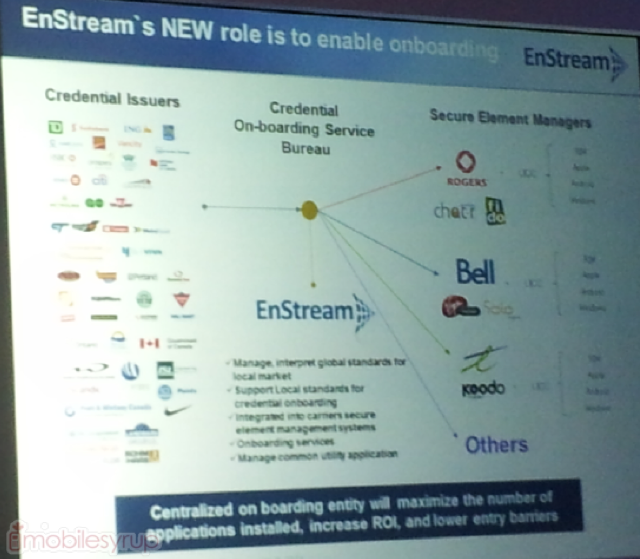 Mobile banking in Canada is mildly used, our major banks have mobile apps and all of them do basic features that let you transfer funds, check account balances and find ATMs. Recently BMO, along with MasterCard, made a good step forward that allows customers to pay for items via their phone with the “Mobile PayPass Tag”. The downside is that you have to affix a sticker to the back of your device. Again, progress.

More devices are being released in Canada with NFC (Near Field Communications) capabilities, such as the Nexus S and Bold 9900, with the goal to eventually have your phone become your “wallet”. This is the direction the Big 3 are heading in with their joint venture EnStream, and also Google with the recent launch of Google Wallet. We are hearing Google Wallet will be available in Canada in 2012 and Enstream’s NFC app will be in market “early next year”. Yesterday at the CWTA Wireless Showcase a quick demo of the Enstream NFC mobile payment app shows how easy it is to use. The app will eventually allow you to scroll through the list of your current cards – bank card, credit card, Tim Horton’s etc. – and then select and point towards the merchant terminal. The charges are them billed/debited from the associated account.

The process is not new in terms of technology, but new for us Canadians. This news with NFC payments coming in full force by “early next year” coinsides with the previous report that Rogers will roll out NFC in Q1 2012. With that said, since EnStream is owned by the Rogers, Bell and TELUS so you can expect them all to take part in any upcoming NFC initiatives (plus their sub brands and “others” like the new entrants). Video of the demo below.