The platform service streams reality TV shows like Below Deck, Keeping Up With the Kardashians, The Real Housewives and more

Reality TV streaming service Hayu has sent an email to subscribers announcing a price hike ranging from 5 percent all the way up to 14.98 percent.

For example, Hayu now costs $6.29 in Ontario, $6.71 in British Columbia and $6.89 in Quebec. You can find all of the changes to the service’s cost in the chart below. In the email, Hayu says that it was forced to make these changes following “recent changes in Canadian provincial and federal tax laws” that require the company to “collect and remit sales tax.” 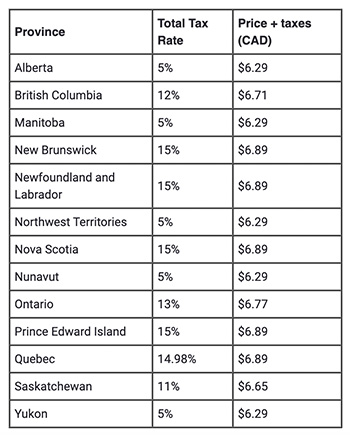 “The price of your subscription remains unchanged at $5.99 CAD per month. The amount you will see on your new monthly invoice from July 1, 2021 will be $5.99 CAD + the taxes in your province,” says Hayu.

Back in November 2020, the federal government unveiled a plan to impose a tax on digital giants like Netflix and Amazon, which will essentially force companies to collect HST and GST on services sold to Canadians.

For context, under current rules, foreign-based digital businesses can sell their goods and services to Canadians without charging GST and HST. However, this will no longer be the case as the new tax changes are scheduled to go into effect on July 1st.

Early in May, Hayu’s Apple TV app went down for several weeks. The issues the streaming service was experiencing seem to have been resolved.