"The rest of Android users can suffer with blindingly white apps." -- A Google developer, probably 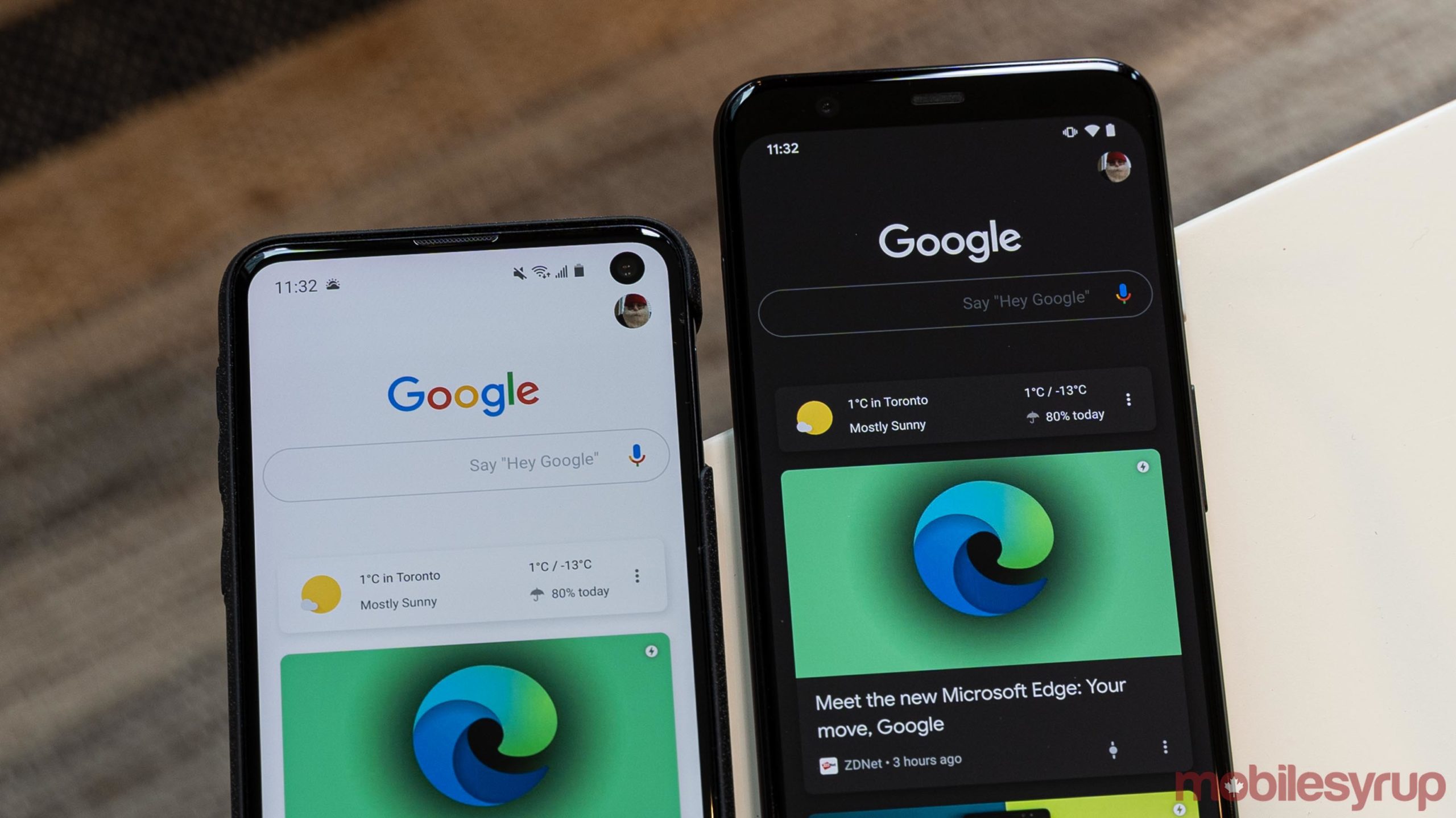 If you’re using an Android device that isn’t a Pixel, your dark mode experience may be severely lacking.

As someone who primarily uses a Pixel device, I was quite content to turn on dark mode in Android 10 and have almost all my apps automatically switch to dark mode as well. Of course, everyone has to deal with the odd few apps that either don’t offer dark mode or don’t change automatically — I’m looking at you, Facebook, Messenger and Twitter. However, after an interesting conversation with a MobileSyrup reader on Twitter, I learned that Google left non-Pixel users out in the cold.

Manufacturers like OnePlus and Samsung rolled out system-wide dark mode toggles with their respective Android 10 updates. Unfortunately, as pointed out by Alex Davies (@alexbdavies) on Twitter, the dark mode toggle doesn’t affect the Google app or Assistant.

I was surprised to learn this was the case since I was running dark mode on my Pixel 4 and both the Google app and Assistant had dark themes on my phone. I checked a OnePlus 7 Pro and a Samsung S10e, both running Android 10, and they didn’t have dark mode for those apps either. Worse, both apps didn’t have built-in settings toggles to enable dark mode within the app separately from the system toggle, despite the Google app featuring said toggle on the Pixel 4 (that toggle changes both the Google app and Assistant). 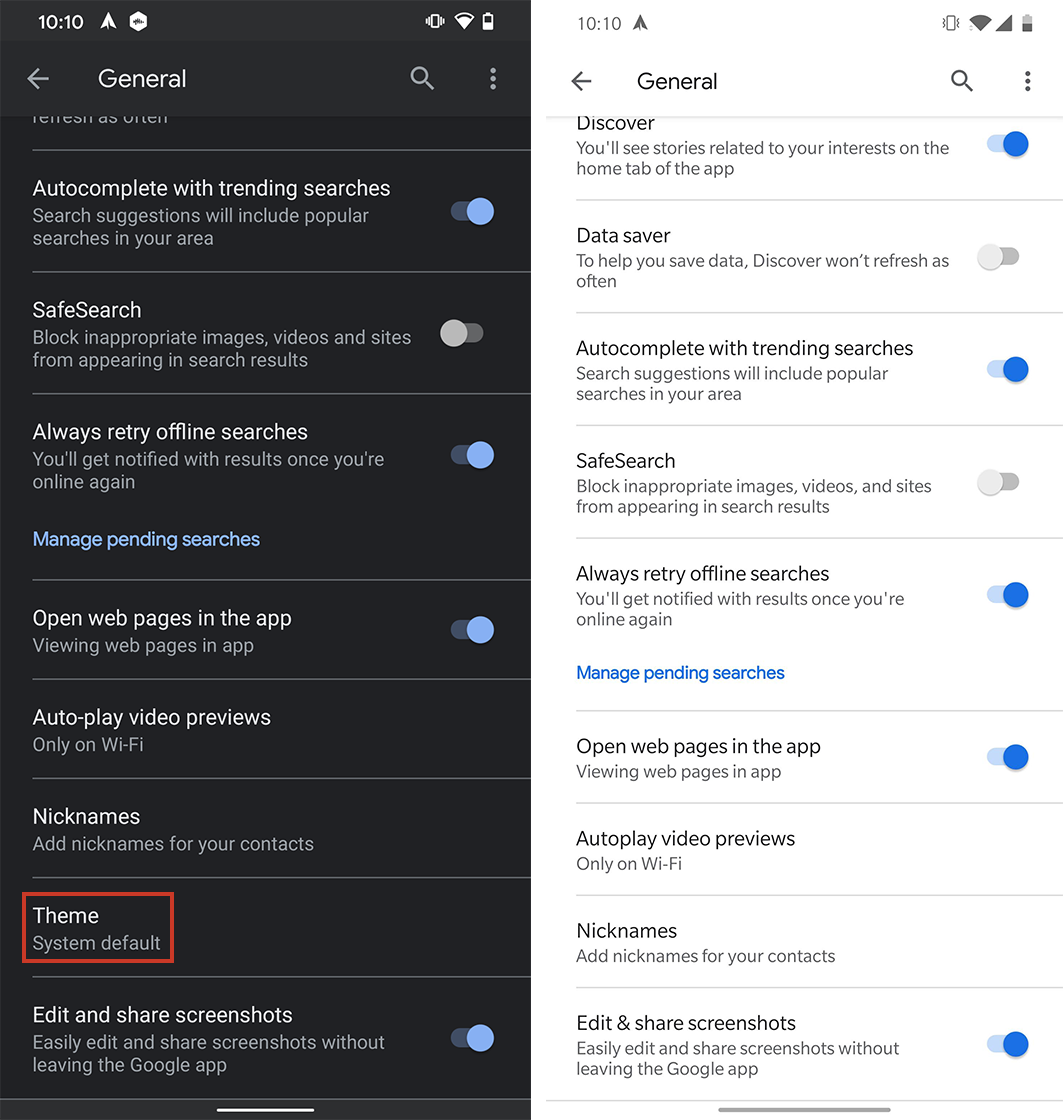 Initially, I thought that maybe the dark theme was part of the next-gen Assistant available on the Pixel 4, which hadn’t made it’s way to other devices yet. But my colleague’s Pixel 3 XL also featured dark mode for both Assistant and the Google app without having the new Assistant. Further, Google rolled out an update that enabled dark themes on both apps back in October 2019.

My next thought was that it was because we use the Google app beta, but that didn’t make sense either. Both the S10e and OnePlus 7 Pro I tested were running the beta version of the app. Finally, I decided it must be a Pixel-specific update of the Google app, so I checked the Google app’s version number to see if the Pixels were running a newer version. 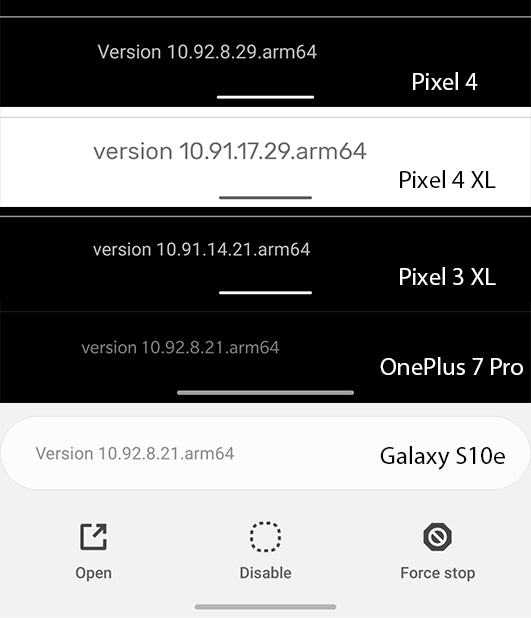 In other words, the Google app version has no bearing on whether dark mode is available or not. Using the Google app beta also doesn’t matter. The only apparent factor that determines dark mode availability in the Google app and in Assistant is whether you have a Pixel or not.

It’s not clear why this is the case, but hopefully non-Pixel Android phones get fair app treatment soon.