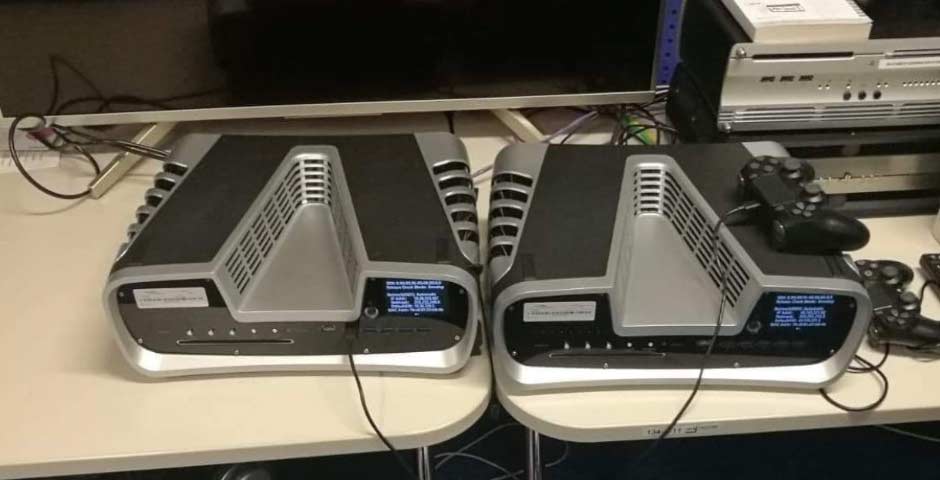 A first solid look at a devkit for the PlayStation 5 has been revealed.

The image comes by way of Twitter user The Drunk Cat (@Alcoholikaust), who says he got it from an unnamed developer.

The design of the devkit resembles what was shown in Sony patents that surfaced earlier this year. It’s important to note, though, that this almost certainly not at all what the consumer version of the PS5 will look like.

As noted on Twitter by The Verge senior editor Tom Warren, the V-shaped design is simply to allow developers to stack them when they’re running multiple stress tests at a time.

yes, this is the PlayStation 5 devkit. The reason it's large and v-shaped is to make them more easily stackable for devs who are running multiple stress tests. The cooling is optimized to push air out of the sides and center https://t.co/pc3wJw2A6v

There’s no reason to think that the PlayStation 5 won’t take on a rectangular shape like the previous four PlayStation consoles have featured.

Instead, the most notable aspect of this image is that it shows what the new DualShock 5 controller looks like. As pointed out by games industry analyst Benji-Sales (@BenjiSales), the picture includes both the PS5’s DualShock 5 and the PS4’s DualShock 4.

One is the new one

DS5 and DS4 are almost the same. 5 is just thicker with a larger track pad, no light bar, and different triggers

The DualShock 5 is the controller that’s on top of the box and stands out from its predecessor due to its thicker shape, larger trackpad, no light bar and different triggers. Otherwise, they look very similar.

Sony had previously confirmed that the DualShock 5 would be quite similar to the DualShock 4 controller, and a patent seemingly corroborated that. However, this appears to be the first clear look at the controller itself.

Otherwise, little else is known about the PlayStation 5. Sony has only confirmed a few details over the past several months, including, most notably, that it will launch in holiday 2020.