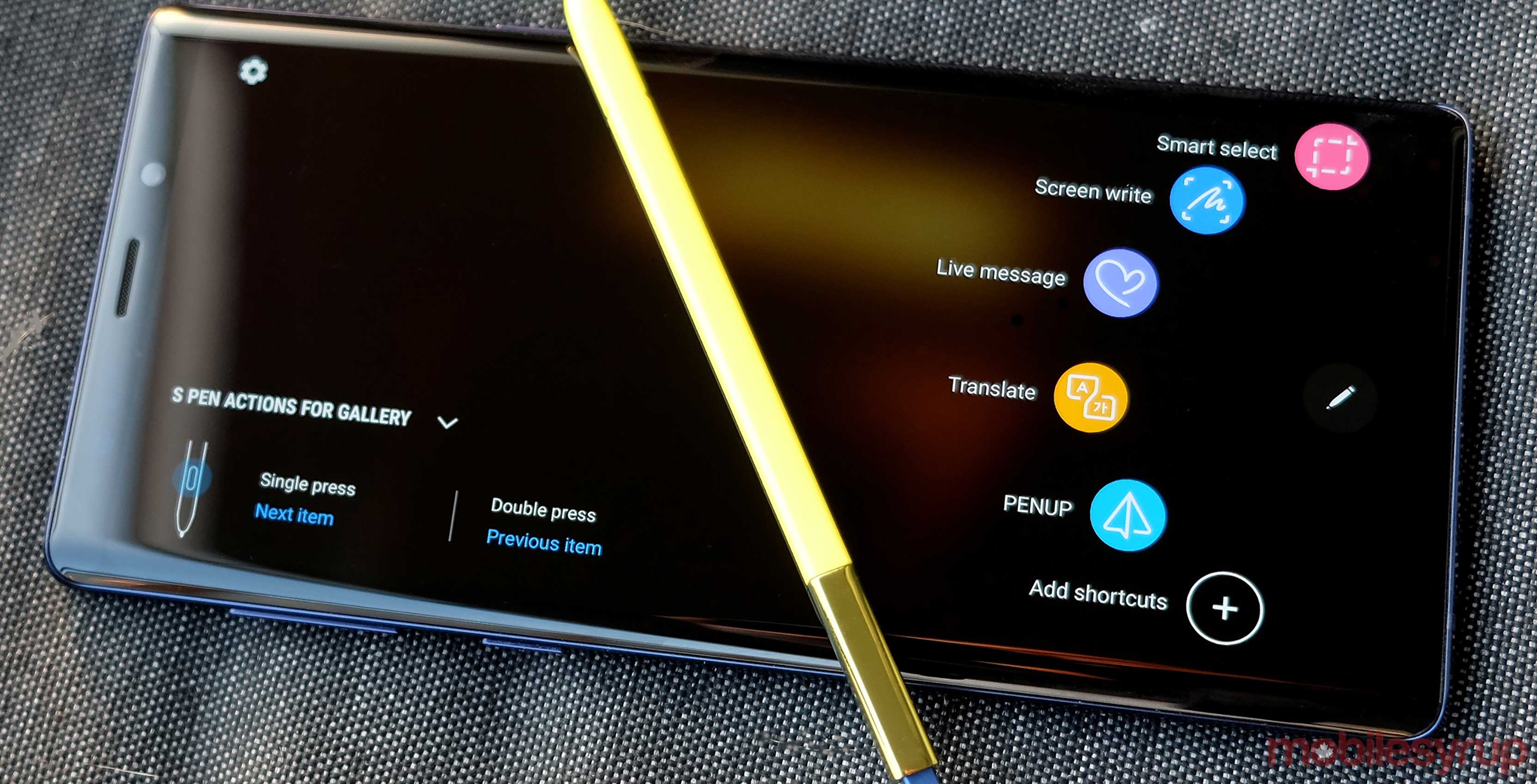 The Galaxy Note 9 is Samsung’s largest phone by screen size, and continues a recent tradition of borrowing heavily to iterate forward.

The South Korean tech giant has now entered into a predictable pattern. The company may present the Galaxy S and Galaxy Note lines as distinct, but they are inexorably tied, with incremental improvements carry over from one to the other.

The camera is no different. An overwhelming majority of the features in the Galaxy S9+, in particular, are found intact on the Note 9. Some of the additions do have practical impact, though it’s the S Pen’s involvement that proves to be the most impactful.

Shooting with this phone didn’t offer too many surprises, except for the potential the new additions may have. For more on everything else the device has to offer, MobileSyrup’s Patrick O’Rourke has that covered.

More of the same 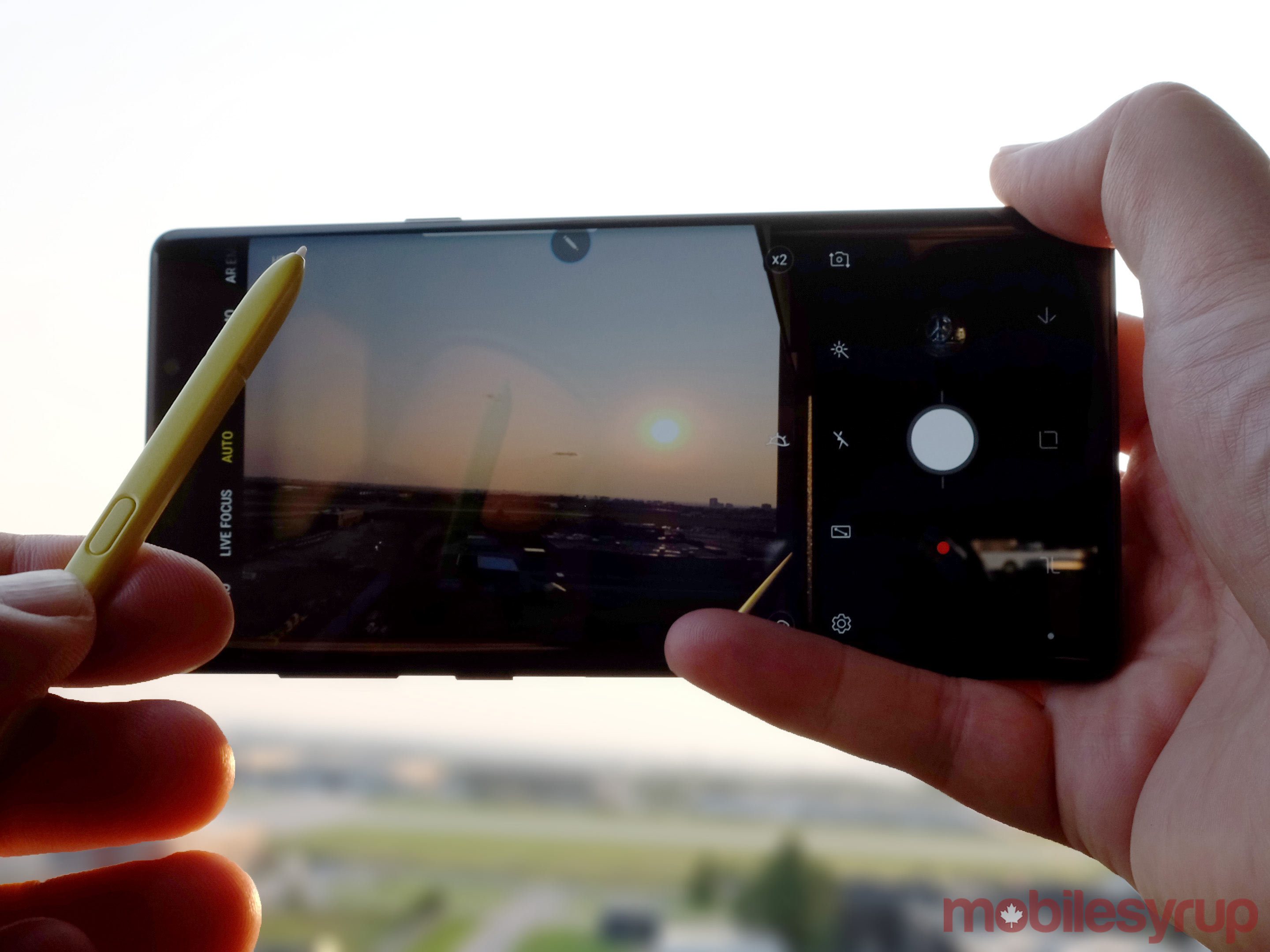 Line up the Galaxy S9+ camera specs with those of the Note 9, and they are almost carbon copies. The same lenses, image sensors and software features are available.

To recap, that’s the same 12-megapixel sensor and mechanical aperture that switches between f/1.5 and f/2.4, plus an additional 2x optical zoom lens. The telephoto lens maintains its static aperture.

This extends to the special modes as well. Live Focus, the mode that uses both lenses to capture images with adjustable depth of field, is back with little to no performance upgrade. Super Slo-Mo video is unfortunately still shot at 720p, rather than 1080p, where it would look better. AR Emoji return as well. That was the mode introduced in the Galaxy S9/S9+ where users could create avatars based on animated versions of their face.

Even compared to the Note 8, the Note 9 is not a leap forward from a technical perspective. The mechanical aperture certainly is different, and is even more useful in Pro mode. The additional software features could make a difference, particularly for novice shooters, whereas the S Pen’s integration could make a more functional difference. 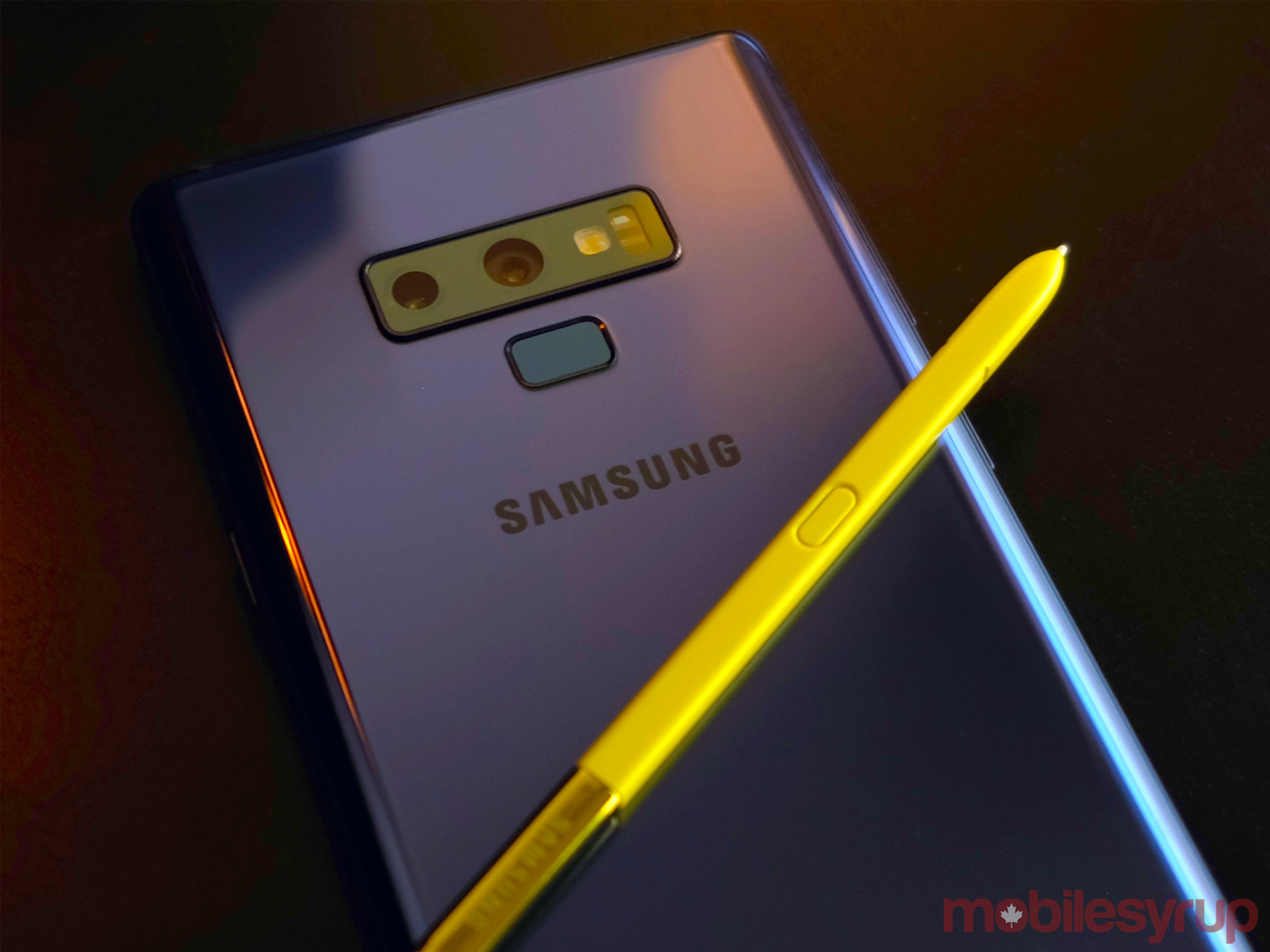 I’ve always been lukewarm on the S Pen from the start. It is a neat accessory to have, though its functionality was that of a stylus. If it wasn’t pressed against the screen in some way, it served no other purpose. Equipping it with Bluetooth Low Energy (LE), it presents another way to utilize it without having to write anything.

The pen’s button can act as a shutter, capable of shooting photos with a simple click. By default, double-clicking the button switches between the rear and front-facing cameras, but you can also toggle that so it records video instead.

It’s one of those practical things that I’m surprised I never considered before. If there are apps acting as remote shutters for cameras, why not an accessory built into the phone? And the best part is that it works efficiently. I used it when setting the phone up on an angle where it was tougher to hit the onscreen shutter (or volume button), and in instances where I wanted to shoot in low-light and nighttime. Resting it on a flat surface or on a tripod, shooting in Pro mode at a very slow shutter speed — I only needed to focus on the display and just click the pen.

In another case, I wanted a majestic angle of a subject, so rested the phone against my shoe while I took each snap with the pen. Whether it was reaching overhead a crowd, an awkward angle or during movement, the pen made its mark.

I’m not a selfie person at all, but when I showed how the pen works for them, people were immediately drawn in. The most consistent feedback centred on the ability to better frame groups without anyone having to push the phone’s shutter. No more handing the phone to the tallest person for a wider angle. 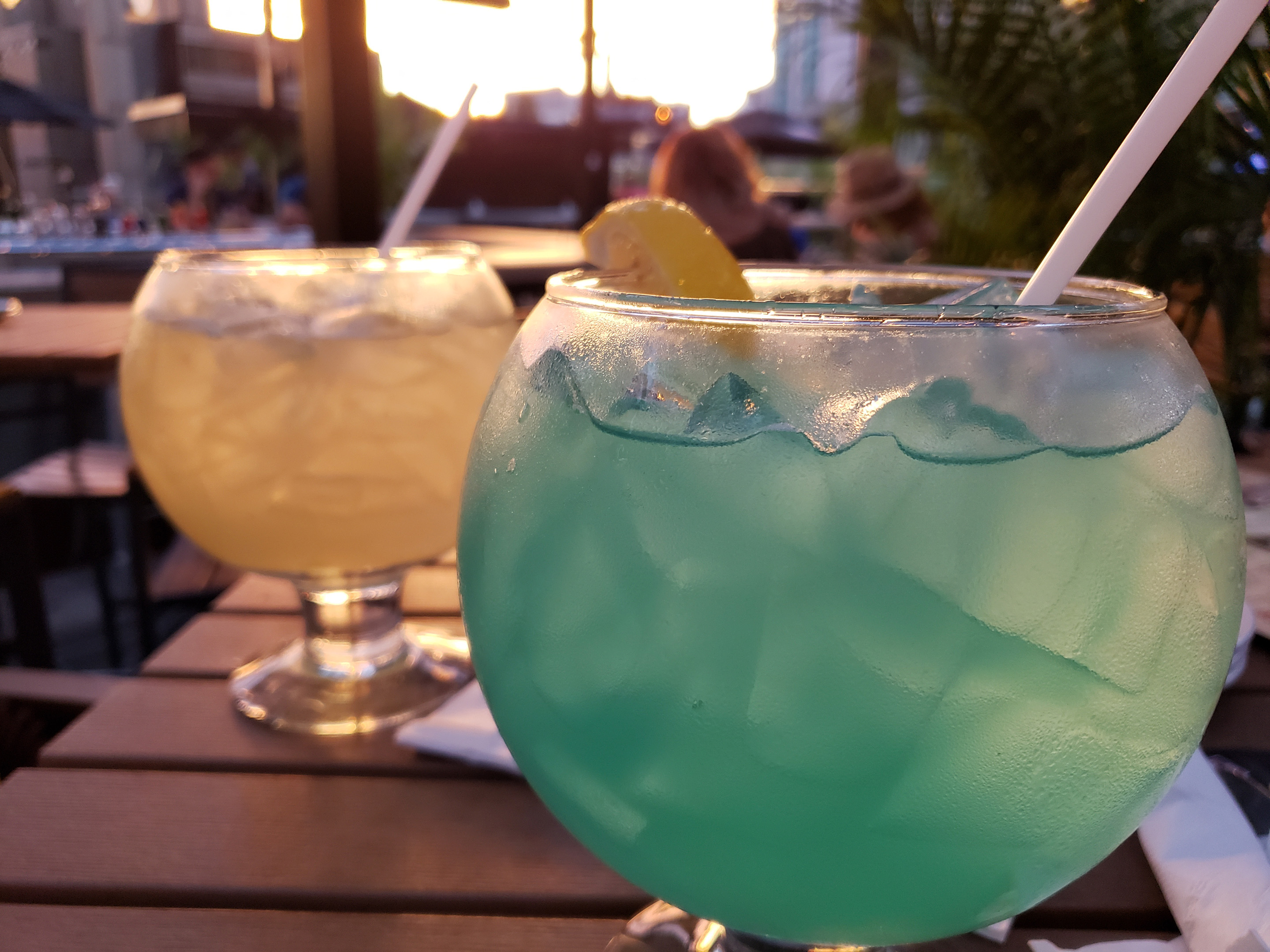 Granted, wider-angle front-facing cameras have helped lessen that burden, but even so, there was no need to contort one’s thumb to snap the shot.

What made this even better was that it wasn’t an all-or-nothing commitment. The pen can go 200 clicks or 30 minutes — whichever comes first — before needing a recharge. Fully charging it only takes 40 seconds.

If Samsung can convince developers to take its open API and make use of the pen’s newfound integration in some way, then it may have a chance of being a game-changer. The good news is that it already works with third-party apps (not all, mind you), including photography ones. So, if you shoot with something like, say VSCO, then you are good to go. 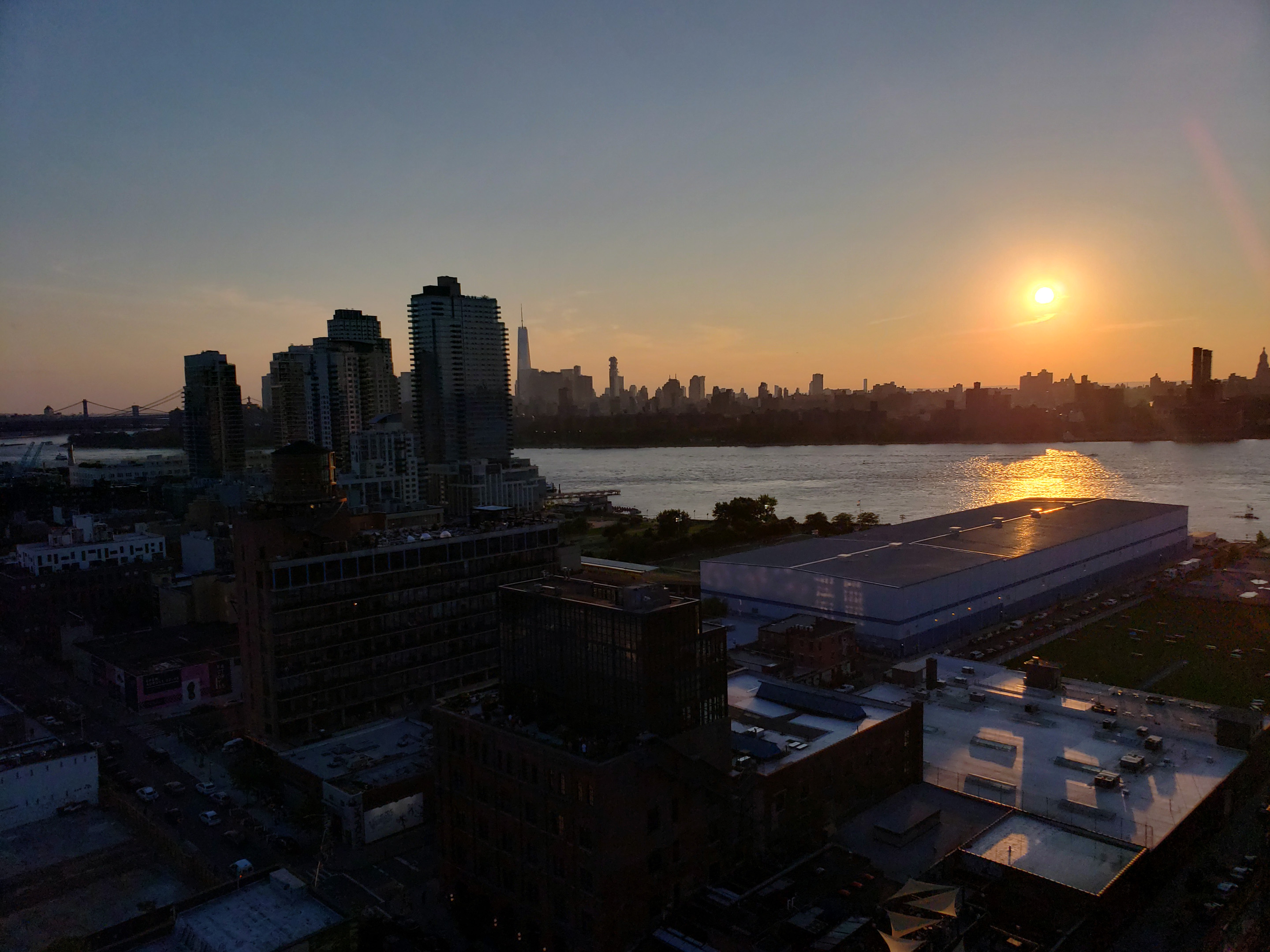 Scene Optimizer is just another term to describe automatic scene recognition, where the camera’s AI identifies the subject and adjusts settings accordingly. Samsung is late to this game, as almost every other phone manufacturer has already done it. Nevertheless, it’s here, and it works decently.

I say decently because I discovered little that made it groundbreaking or innovative. It functions much like any other scene recognition does, though the Note 9 has a slight edge with the mechanical aperture playing a role.

There are 20 presets the camera can pick out, including sunsets, food, portraits, landscapes, mountains, birds, street scenes, backlit subjects and skies, among others. Do they work? Yes, for the most part, but as I discovered with the Huawei P20 Pro, two of the same qualifiers can confuse the AI. If you shoot a landscape with mountains and a sky in it, it’s a little hit or miss over how which one will take precedence.

Despite that, at least it’s a move in the right direction. And it’s entirely optional. Toggle it off and you basically have the same Auto mode from the Note 8 and Galaxy S9/S9+.

Then there are the flaw detection features, which highlight blurred and blinking subjects. This is one of those things that can be truly useful, if only the execution was broader. For example, blur detection only sets in when the level of blur is fairly significant. I would’ve preferred it tell me if there was any blur in the focal area to begin with.

The blink detection is more effective for selfies, but even then, it only seems to hone in on eyes that are fully closed. Anything less than that seems to slip through the cracks.

Samsung deserves some criticism for putting out a $1,300 device that doesn’t at least raise the bar on camera prowess, but if it is any consolation, the Note 9 is one of the best shooters around.

The iPhone X is lauded for its camera, but I believe that praise is misplaced. True, it can take great photos — under the most optimal conditions. However, night shooting is mediocre at best, terrible at worst. In my testing, the Note 9 beat it handily in those scenarios.

What the Note 9 gets right is good contrast with less noise. For example, in one shot I took, the clock’s details are visibly clear, while the darkest portions aren’t rife with noisy pixels. It only got better when I shot in Pro mode, where I could dial back any excessive ISO and shutter speed adjustments in Auto mode.

I found little to differentiate from the Galaxy S9/S9+, in almost every respect. There were a few cases where the Scene Optimizer did its thing well enough. Other times, I felt like I was shooting with the S9+ all over again. That even goes for Live Focus, which is still pretty neat, though still needs work when dealing with strands of hair.

Super Slo-Mo mode really needs a resolution boost. It’s a cool thing to show off, but any drop in lighting becomes a snowfall of grain, rendering the mode moot in a variety of situations.

I’m still not sold on Bixby, especially when it comes to the Vision component. That’s the part that is supposed to offer contextual information through the camera. Translating text is one thing, and it does okay on that, but anything related to product or food is shaky at best.

In fact, it feels unchanged since I reviewed the Galaxy S9/S9+ cameras. For a platform in desperate need of big leaps to respectability, the camera integration leaves plenty to be desired. That could change in 2019, but the mountain to climb only gets steeper with Google Assistant and Amazon Alexa going strong.

The old adage is that ‘if it ain’t broke, don’t fix it.’ It’s an agreeable concept, yet it doesn’t always feel like it with an expensive handset like the Note 9. An excellent camera had the potential to be even better, putting more pressure on competitors to raise their games to meet the challenge.

If you have a Note 8 or Galaxy S9/S9+, there is not enough here to warrant an upgrade for the camera. Too many features in those devices are in this one with little to no innovative change. If you’re upgrading from something older, however, the Note 9 will feel like an improvement. A vast improvement if we’re talking something prior to 2016.