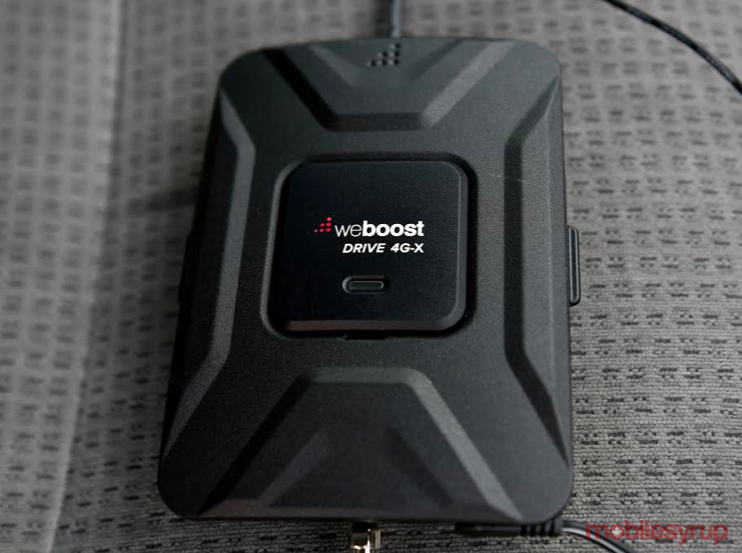 Losing reception in the car doesn’t seem to be the sort of thing people gripe about anymore, but that could also depend on where you live and the route you’re driving. A signal boost could make a big difference in weak or dead zones.

That’s what weBoost has attempted to rectify with its Drive 4G-X, a serious cellular booster that is theoretically capable of amplifying a signal up to 32 times. With that kind of power, one or no bars should easily turn into three, four or even full bars. With an agnostic setup that can work in any vehicle and on all carrier networks, this booster should be able to fit in anywhere. 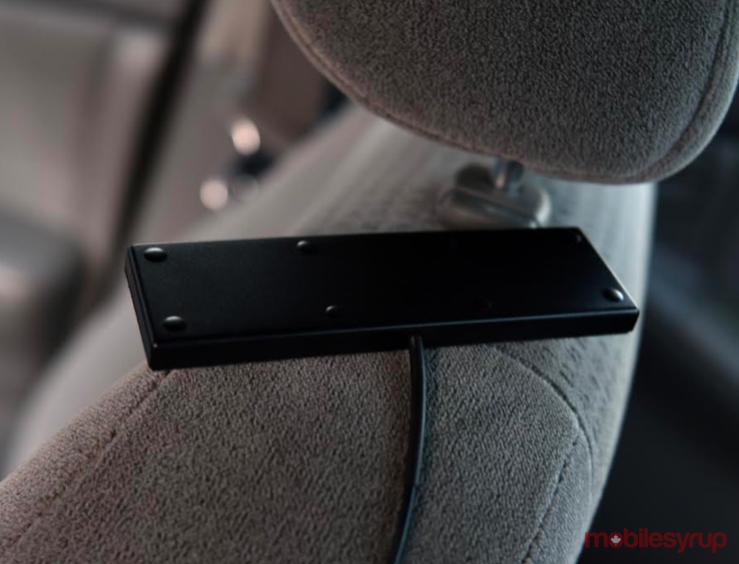 To test out the tangible benefits of the 4G-X, it was used in a few different situations. One was city driving around Toronto to gauge consistency. Another was on a six-hour road trip from Montreal to Toronto. In between all that, I wanted to see how different phones reacted to it, and whether there were variations or fluctuations between them.

Formerly known as Wilson Electronics, weBoost has been in the signal boosting business for a long time, and with the move to LTE, the need for signal amplification arguably lessened, as a result.

However, again, that does depend on where you’re located or where you’re driving. Urban residents may not run into as many dead zones, whereas rural ones could invariably cruise through them all the time. Anyone who drives for a living may find the idea of a signal boost appealing. The Drive 4G-X supports every working band in Canada and the U.S., and works with 2G and 3G networks, too.

With so much data now being relied upon for everything from messaging to streaming music and social media, the inherent desire to stay connected with as few hiccups as possible is part of what the Drive 4G-X is supposed to ensure. Being device and carrier-agnostic only serves to help the cause and influence adoption. 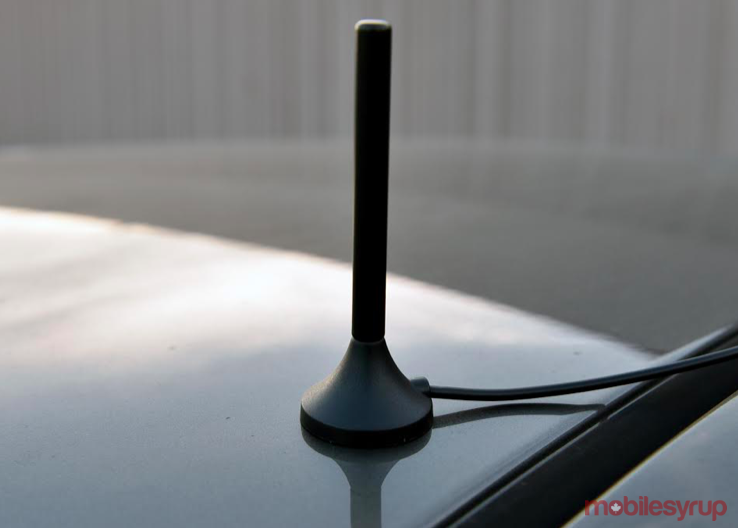 The agnosticism extends to just about any vehicle, making the setup process far less invasive than it might seem. There is the option to have a professional install it and make it look less conspicuous, but I didn’t go that route because I also tested it in two different vehicles.

The Drive 4G-X is consistent with previous in-car amplifiers under the Wilson brand, which is made to be more portable than it looks. The main unit has a mounting bracket on the back for more permanent placement, though it can just as easily be placed under the driver or passenger seat.

On the one side, the outside antenna connects to the main unit and is then placed on the roof or side of the vehicle, with a strong magnet on the bottom keeping it steady. On the other side, there is a plug for the power adapter that goes into the 12-volt socket, plus a connection for the ultra-slim inside antenna. The latter antenna has Velcro on one side, and comes with a strip that can be stuck to a more non-descript part of the car, like the panel in between the passenger and rear door. If the interior material can attach to Velcro, placement options increase dramatically.

Running the cables is really the most time-consuming part of the setup. Trying to make them less exposed and keep them out of the way does require some thinking. The outdoor antenna cable, for example, can stay a little more hidden by running it along the weather stripping in the door. I did it that way and it worked out fairly well.

Flipping the switch on the adapter turns the booster on (indicated with a bright red light). Up to four SIM cards can be supported, boosting them all simultaneously. 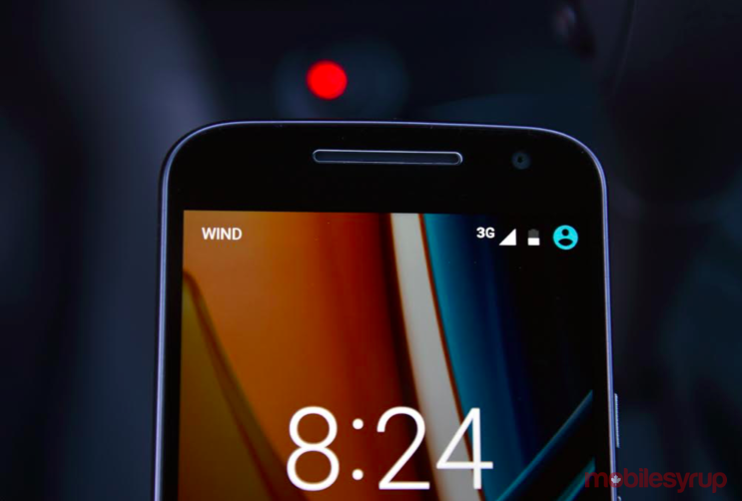 The booster took a little time to get going at first. I noticed no real difference in amplification in the initial stage, but that soon changed.

On the drive from Montreal to Toronto, where reception rarely moves into dead zones these days, areas where one bar was as high as I could get soon turned into three bars. Others with three bars normally went to four or five.

Not all carriers appear to benefit the same way, which probably depends on location. For example, where I was getting four bars with the booster on a Bell SIM, a Fido one was stuck on two. Other times, reception was fairly stable on all the SIMs I had in the car at one time.

A Wind SIM, meanwhile, stayed steady at three. Anywhere I drove in the Greater Toronto Area (GTA) and surrounding areas, I was getting full bars on it. Most of that geography is officially a Wind Zone anyway, but I was particularly impressed at the potency of the connection in parking garages and other roaming areas.

At one point, with the booster turned off to gauge fluctuations, I lost the connection to Google Maps on an HTC 10 with a Bell SIM inside. Two minutes after turning the booster back on, the phone reestablished a connection. Whether I had already passed a small dead zone or not, I can’t be sure, but the fact the mapping app was back up may not have been a coincidence.

Calls along the Montreal-Toronto route and throughout the city went smoothly. I had no trouble hearing anyone at any time. No dropped calls, and no stuttering voices.

One of the tangible benefits weBoost touts with the Drive 4G-X is improved battery life because the phone doesn’t have to work as hard to make a connection. This would seem less of a boon when in-car charging is so ubiquitous, and I can’t be sure that I noticed that much of an improvement for phones that weren’t plugged into a charger, either.

As I was going through the testing, I mused about the device’s use cases. Renting a car to roll through more desolate areas that aren’t as well connected is a unique instance where the unit could be indispensable. Camping somewhere in the countryside, road trips with kids, and roaming across the country or continent in an RV are a few others.

Living in a big city that already has very fast wireless networks largely negates its need, so it’s not worth plunking down the $480 (at Best Buy and other retailers) to buy the booster if a vast majority of your driving is in a large metropolitan area. 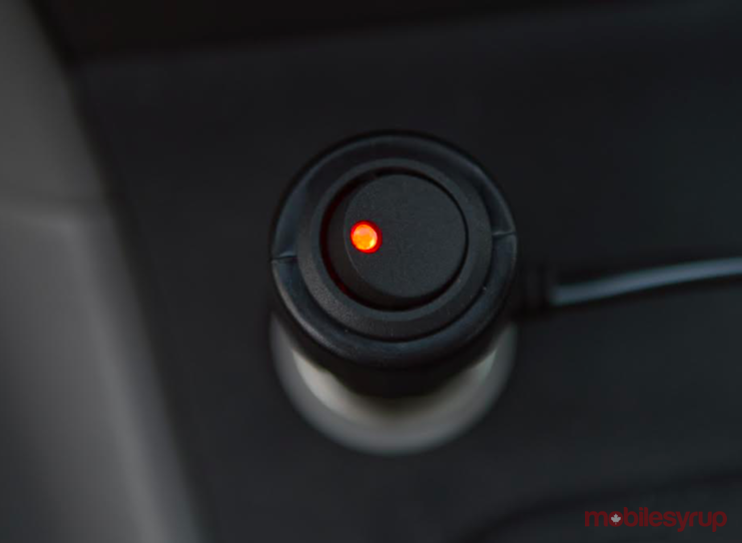 The Drive 4G-X delivered as advertised, boosting any signal from any carrier at virtually any time. Despite a lack of consistency with certain carriers in certain areas, the overall results were still easy to appreciate. Being device and carrier-agnostic makes the unit applicable to any phone in any vehicle.

Even without any subscription or residual fees to use it, the booster is an expensive, calculated purchase. It may be a no-brainer for anyone who needs a regular signal boost when driving, whereas it may be food for thought for those who may not need it all the time.

Related reading: weBoost aims to increase awareness of signal boosting in Canada with the Eqo